Ottawa’s police chief says the response to the protest has been a success. Not everyone agrees 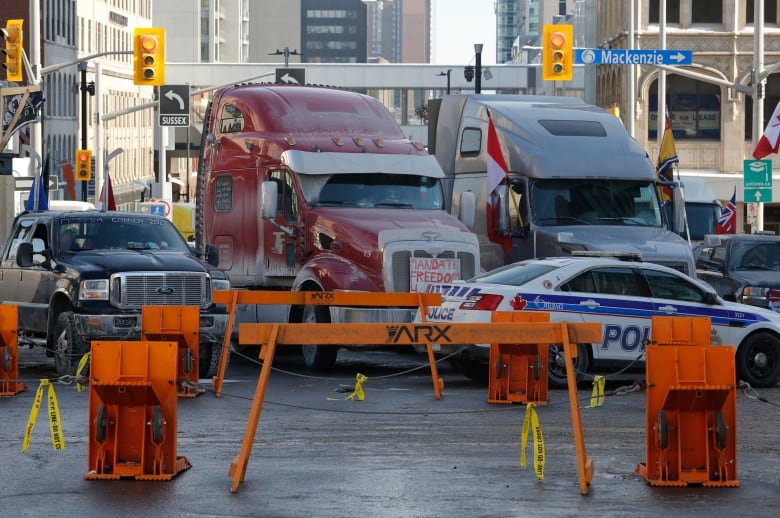 Ottawa’s police chief says his force’s response to the convoy protest has been a “success,” but some critics say he’s ignoring multiple reports of harassment, vandalism and assault that have plagued the capital’s downtown core since Friday.

Chief Peter Sloly says the response has achieved its most important goals.

“The question was, is the bar of success no riots, no injuries, no death? Absolutely,” he said earlier this week.

But Coun. Catherine McKenney, whose Somerset ward covers the protest area, disagrees. “I’ll tell you what’s not been a success is the response in a residential neighbourhood in Centretown, where it is chaos.”

McKenney suggested the chief was ignoring some significant problems that have occurred in their ward.

“I can’t begin to explain the messages I’m getting. Hundreds every day. They are heart-wrenching — of people being harassed. I have a video of a homeless person beat up on Bank Street,” they said. “I have accounts of women being sexually harassed; people being followed on the streets — yelled at, harassed; trucks driving up sidewalks, going through downtown neighbourhoods.

“Ottawa police have got to get back into the neighbourhood that is crumbling at this point and do their jobs right.”

Many anti-vaccine mandate protesters remain in the downtown core, with big rigs and other trucks along major roads, forcing the shutdown of many businesses over safety concerns. People who live in the core say the truck horns are blaring into all hours of the night and starting again early in the morning.

Several protesters have been accused of violence, harassment, racism and homophobia. Ottawa paramedics have also confirmed rocks and verbal abuse were hurled at an ambulance and first responders over the weekend.

While some residents have praised the officers’ efforts, others accuse police of employing a racial double standard.

“The double standard couldn’t be more blatant,” Robin Browne, co-lead of the advocacy group 613-819 Black Hub, said in a statement. “We suspect that if the truckers had been Black and Indigenous, the police would have reacted very, very differently.”

Police say several investigations into protest-related incidents are underway. Sloly has said the volatility of the protests and the risk of escalating a situation — possibly endangering residents and first responders — make it difficult to lay charges or issue tickets when incidents occur.

“That is the reality of policing these large scale, dynamic demonstrations,” he said Monday. “We’ve done our very best. We’ve kept the city safe.”

Michaela Bax-Leaney, who placed a sign on her balcony over the weekend expressing support for COVID-19 vaccines, said that sign was knocked down by a protester, then someone later climbed the tree next to her balcony and tore it down again.

She said she and her partner didn’t report it to the police because they didn’t think “it would be at all useful.”

“It seemed pretty clear that Ottawa police aren’t really interested in punishing or — not even punishing, just enforcing the law,” she said.

Sam Hersh, of the grassroots organization Horizon Ottawa, said Sloly’s comments were “textbook gaslighting” for those in the community for whom it’s not safe to go outside.

Hersh says the police would have been more prepared if they hadn’t treated the convoy as a peaceful protest.

Hersh also says the police are treating the protesters differently, a view shared by Vanessa Dorimain, who co-chairs the Ottawa Black Diaspora Coalition. She says police would have swooped in and broken things up by now if the protesters were primarily racialized or Indigenous.

Dorimain compared it to November 2020, when she and others blocked an intersection while protesting the police’s treatment of Black and Indigenous people. This had followed the acquittal a month earlier of Ottawa police officer Daniel Montsion in the death of Abdirahman Abdi.

“We were moved on with weapons after 36 hours of blocking an intersection. We’re not seeing that here, even though you are witnessing a bunch of illegal activity,” she said.

Sloly has said the two situations are different, and that he doesn’t see a connection with the scale, size and nature of what police are currently facing with the convoy protest.

In a statement, the Public Service Alliance of Canada in the National Capital Region said it was disappointed in the City of Ottawa and the Ottawa Police Service.

“As an activist union, we have held and participated in countless human rights protests in Ottawa over the years. Yet, we have rarely — if ever — seen protesters being treated with the same deference and friendliness the Ottawa police showed those in attendance over the weekend,” the union said

Others praise the police efforts, saying they understood the rationale of not wanting to rush in to soon.

“I don’t think you ever want anybody having to go in and use billy clubs and riot shields and all that kind of stuff.”

Steve Ball, president of the Ottawa-Gatineau Hotel Association, says he understands others might measure success differently, but that Sloly is right to measure his efforts as successful.

Ball said a lot can go wrong when there are hundreds of tractor trailers in a downtown core, but that the current situation “hasn’t really gotten out of hand like it could.”

Coun. Diane Deans, who also chairs the Ottawa Police Services Board, said, at some point, trust must be placed in police services and their greater experience with risk and threat assessments.

“They make decisions based on the information that they have in the moment, with public safety clearly in the centre and there will be time afterwards to, you know, debrief on this and to understand why those decisions are being made,” she said.