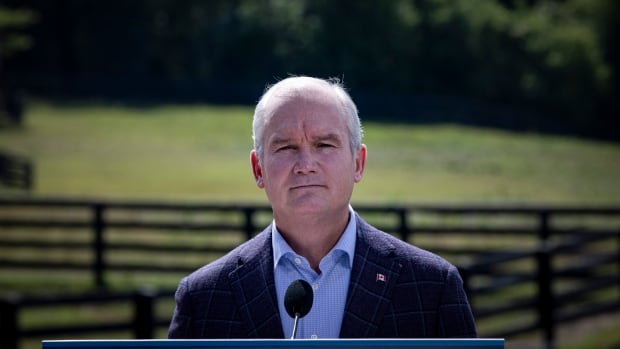 Conservative Leader Erin O’Toole today defended his plan to roll back Canada’s climate change reduction targets, saying he has a credible plan to slash greenhouse gas emissions while the Liberal Party has promised a lot but failed to deliver in six years of government.

If elected, O’Toole said, he will push the reset button on Canada’s climate change plan, returning to the previous national target of reducing emissions by 30 per cent below 2005 levels by 2030. Earlier this year, the Liberal government dumped that goal and committed to deeper cuts, promising to bring emissions down by 40 to 45 per cent by the end of the decade.

Asked why he’s promising a less ambitious target at a time when UN scientists are warning that urgent action is needed now to avoid the worst effects of climate change, O’Toole said Canada must balance environmental action with a strong economy.

“Canada’s recovery plan includes a commitment to meet our Paris targets and get emissions down while making sure the country gets back to work. That is what Canadians want,” he said at a campaign stop in King City, Ont., referring to his party’s platform.

“He hasn’t met his objectives. Mr. Trudeau has missed those targets every single time as prime minister,” he said.

According to the latest report from Environment and Climate Change Canada, the country’s emissions have ticked up on Trudeau’s watch.

In 2019, the first year of the federal carbon pricing regimen, commonly called the “carbon tax,” Canada produced 730 megatonnes of carbon dioxide emissions, an increase of one megatonne — or 0.2 per cent — over 2018.

However, the economy grew faster than emissions did in 2019 — which means the country’s “emissions intensity” is lower than it has been in the past.

The 730 megatonnes of emissions recorded in 2019 is slightly higher than the 723 megatonnes Canada churned out in 2015, the year Trudeau first took office.

Under the government’s current “pan-Canadian climate framework,” emissions are projected to drop to at least 503 megatonnes in 2030, a decline largely driven by carbon pricing, new restrictions on the oil and gas sector and the “greening” of the country’s electricity grid.

“We need to make sure that we have more than just hollow words from Mr. Trudeau,” he said.

Trudeau defended his government’s climate record Monday in face of Conservative attacks, highlighting a campaign commitment to provide rebates of up to $5,000 for zero emission vehicle (EV) purchases and a commitment to build 50,000 more EV chargers nationwide.

“There has never been a government as ambitious as this one on climate change,” he said at an announcement in Montreal.

“Canadians should know they have a choice — going back to the Harper targets, going back to the Harper approach on the environment under Mr. O’Toole or continuing to be ambitious because we understand not only is fighting climate change the right thing to do it, it’s the best thing to do for jobs and the future,” he said, referring to former prime minister Stephen Harper.

In addition to past EV supports, the Liberal government has implemented an aggressive carbon pricing mechanism to drive down fuel use by consumers, set aside much more land for conservation, halted oil tankers in northern B.C. and is poised to ban single-use plastics, among other environmental initiatives.

While promising climate action, O’Toole has also suggested that a government led by him would approve a project like the now-defunct Northern Gateway crude oil pipeline.

In an interview with Radio-Canada Sunday, O’Toole said one of his “priorities” is getting more pipelines like Northern Gateway and Trans Mountain built.

O’Toole said Monday new projects would help secure export capacity for Canada’s landlocked oil while boosting a sector that has been hit hard by low commodity prices in recent years.

“We should make sure that democratic countries use Canadian resources, not resources from Saudi Arabia or Venezuela or Russia,” he said. “That will be our approach in getting access to tidewater.”

In 2016, the Liberal government killed the Enbridge-backed project, a 1,177-kilometre pipeline that would have carried diluted bitumen from Bruderheim, Alta., to an export terminal in Kitimat, B.C.

At the time, Trudeau said that the majestic Great Bear Rainforest in northern B.C. was no place for a pipeline and  that the expected increase in oil tanker traffic in the region’s Douglas Channel threatened local wildlife.

But the decision angered some Indigenous communities that had an ownership stake in the project. The Aboriginal Equity Partners, a group of 31 First Nations and Métis communities from the area, collectively held 33 per cent of the project, an investment that was worth nothing after the cabinet spiked construction.

“The thing I liked most about the proposal for Northern Gateway was the economic partnerships for Indigenous communities. I would like to see an intergenerational transfer of wealth and opportunity after generations of trauma transfer,” O’Toole said.

“Mr. Trudeau cancelled that pipeline without consulting with Indigenous owners; he failed in his duty to consult. That’s not the way we have economic reconciliation.”

O’Toole’s climate platform calls for a reworked version of the existing carbon pricing regime. Instead of sending tax money to Ottawa, the Conservative plan would see the levies paid on fuels such as gas and home heating banked in personal “low carbon savings accounts.”

Individuals would be allowed to use the money in these accounts only for “green” purchases — such as more efficient furnaces, bicycles, bus passes and other goods and services that lower emissions. The program would apply only in provinces that don’t already have a price on carbon.

The current Liberal plan returns  90 per cent of the money collected by carbon pricing back to Canadians at tax time. In the last federal budget, the government announced that those “climate action incentive” payments will soon be rebated four times a year in the form of a cheque or direct deposit.

The Conservatives have long opposed the Liberal carbon tax — in government, the party’s MPs frequently blasted Liberal and NDP plans for a “job-killing carbon tax.” O’Toole has said that, under his leadership, the party is going in a different direction.

One of O’Toole’s candidates, Cheryl Gallant, a longtime MP who is running for re-election in the eastern Ontario riding of Renfrew–Nipissing–Pembroke, has been circulating a flyer warning that Trudeau could soon impose a “climate lockdown.”

Despite that rhetoric, O’Toole said all of his candidates are onboard with his plan for climate action.

“All our candidates are committed to our plan to get the country back to work and to lower emissions and meet our Paris targets,” he said.