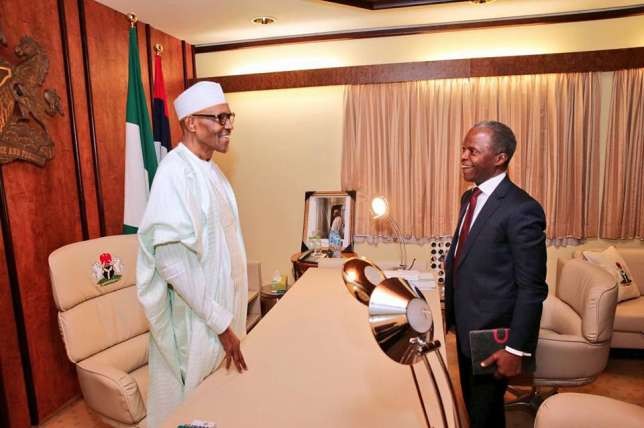 He said the president’s firm hold on governance has ensured that the country is saving more.

Vice President Yemi Osinbajo has hailed President Muhammadu Buhari for overseeing an administration that is saving a lot of money for the country by eradicating the culture of corruption.

While recently speaking to the leadership of The Companion, an association of Muslim Businessmen and Professionals, the vice president said that the president’s firm hold on governance has ensured that the country is saving more.

He further said that when the president is done comprehensively dealing with corruption in the country, there will be a lot of improvement.

“There is no corruption in the presidency under the current government. This kind of body language is what is saving this country a lot of money now. Like what is happening in JAMB, Customs, FIRS, NPA, FAAN, NIMASA where we have witnessed improved revenue collection and returns to govt for unspent resources.

“When we begin to deal with corruption in all facets of government particularly within the public sector, there will be a lot of improvement in our country. The government is also looking at improving ease of doing business to be able to attract more foreign direct investment over a period of time.

“All MDA’s will be made to submit their expenditure in line with the budget as well and in compliance with the accounting year.”

The vice president also took another stab at the opposition People’s Democratic Party (PDP), arguing that they have should not be thinking of returning to power after the mess they left behind for Buhari to fix.

He said, “The rot we met in office has never happened before. The previous government spent the whole reserves and even borrowed money which were distributed for election purposes.

“It has never happened in this country where the presidency directly takes money from the Central Bank to distribute to its cronies and where very few officials stole the country dry.

“This is the only nation where such can happen and the same party under whose watch it happened will still be clamouring to be returned to power.”

The vice president also noted that the government is determined to do a lot more to improve Nigeria’s standard of education particularly vocational education and tertiary institutions,  infrastructure, and general reform.

“We cannot rest until social structure is improved and election promises are met,” he said.