In Scarborough, the east-end Toronto area that’s been hit hard by the pandemic, Dr. Lisa Salamon was shocked by the impact of COVID-19 on two younger adults who came to her emergency department one day last week.

Both looked fine, but tests showed their oxygen saturation levels were well below normal, while X-rays uncovered dire impacts on their lungs. That same day, Salamon’s colleagues also treated two other COVID-19 patients, both nowhere near their golden years. One was sent off to the intensive care unit, Salamon said. The other died.

Most striking for the Scarborough Health Network emergency physician was a man in his 40s who came in so sick he required supplemental oxygen before heading off to the intensive care unit, and needed to be proned — a face-down position used to help patients facing acute respiratory distress.

Recently, multiple Ontario physicians said they’ve noticed an increase in both the number of COVID-19 patients requiring care, and a shift in who is now heading to hospital.

Across Ontario, there’s growing consensus among medical experts that the province has entered a third wave of COVID-19 cases.

There’s also growing concern that anecdotal evidence of recent serious infections skewing toward younger adults is a harbinger of a difficult stretch to come — one that may upend persistent notions of COVID-19 typically only being a grave illness for the elderly.

“We’re at a real risk right now of the variants of concern taking off, and that prime age group of 40 to 75 being hit really hard by this wave, particularly with the variants being more likely to cause serious illness that requires more hospitalization,” said Dr. Brooks Fallis, a critical care physician in Peel region, west of Toronto.

Emergency physician Dr. Kashif Pirzada said his colleagues in the Greater Toronto Area are already seeing an impact, with younger patients arriving in hospital even more ill than during previous waves.

“I myself saw a few patients in their 30s and 40s who had significant illness,” he said. “One person had severe lung damage that you see in COVID, and they were young, healthy, no medical problems.” 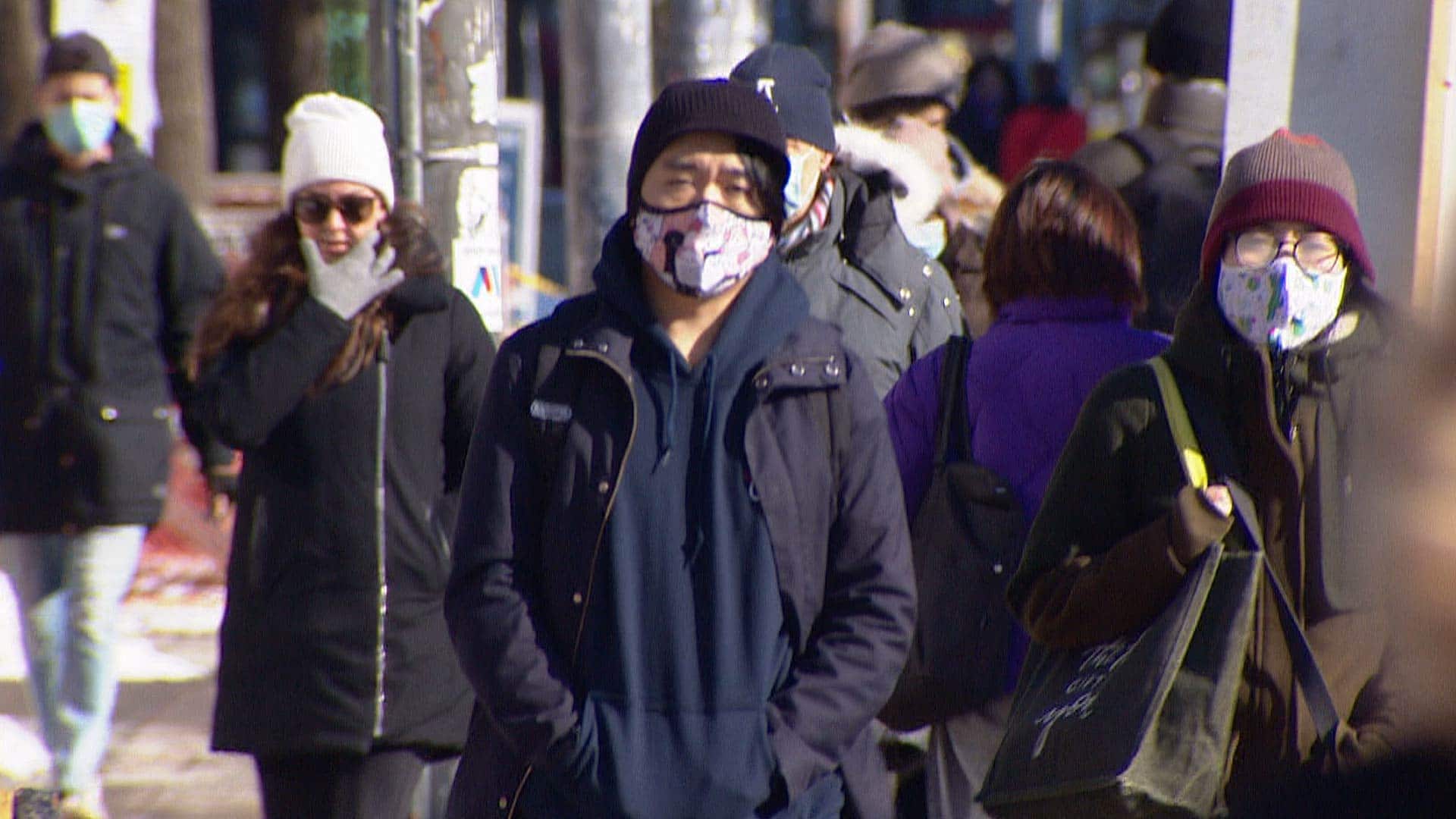 Despite rising vaccination rates, there’s growing consensus Ontario’s third wave of COVID-19 cases has already started. Clinicians and epidemiologists warn patients may be both younger and sicker this time around. 2:04

Clinicians and epidemiologists suspect multiple factors could shift the trajectory of the pandemic in Ontario.

On one hand, vaccinations are slowly making an impact for certain populations, including front-line health-care workers and the elderly — with the death toll in long-term care dropping dramatically as vaccination rates have picked up.

But there are still hospitalizations and deaths happening among other groups, with younger adults remaining vulnerable, said Dr. Kali Barrett, a critical care physician at Toronto’s University Health Network and a member of the COVID-19 Modelling Collaborative, a group of scientists and clinicians affiliated with Toronto’s university and hospital system.

“Our vaccination efforts to date have done nothing to protect the at-risk, community-dwelling adults,” she said.

Against that backdrop, there’s a patchwork of restrictions and reopenings across the province, giving people more chances to mingle and spread the virus, whether that’s in a shopping mall or a spin class.

54 per cent of cases now variants

Those variants of the coronavirus are now circulating widely, making up 54 per cent of COVID-19 cases, according to the latest figures from Ontario’s COVID-19 Science Table.

“For younger people, the messaging has been, ‘You don’t want to get COVID, but it’s not as big a deal if you do,'” said Ashleigh Tuite, an infectious disease epidemiologist with the University of Toronto’s Dalla Lana School of Public Health.

“That messaging, first of all, has been dangerous and incorrect in general, but with these new variants circulating, it’s now important to understand that things look different.”

A recent Ontario-wide academic epidemiological analysis provided on background to CBC News suggests that, between December 2020 and mid-March, there was an increased risk of hospitalizations and ICU admissions tied to variants compared to COVID-19 cases in general.

That echoes other research from elsewhere in the world. A team in the U.K. first announced the B117 variant may be more deadly — on top of more contagious — back in January, with evidence mounting since then about its grave health impacts.

While there’s hope widespread vaccinations will wind down the pandemic, potentially within months, this next stretch could be challenging on two fronts: The individual risk of serious illness appears up for younger adults, and so, too, might be the strain on the health-care system as a whole.

Already, ICU admissions are ticking upward again after the second surge that started back in September, with little reprieve following a mid-January high of more than 400 COVID-19 patients in Ontario critical care units at the same time, the latest data from Critical Care Services Ontario shows.

“Our baseline is different,” said Dr. Michael Warner, the medical director of critical care at Toronto’s Michael Garron Hospital. “So there’s potential for us to dramatically exceed our wave two peak.”

While daily admissions are only in the double-digits provincewide, he stressed there’s a snowball effect that could happen.

“You could argue that wave two has never stopped,” Warner said. “As soon as things plateaued, we opened things up.”

As admissions increase, hospital teams are getting a sense of which people are falling ill, at least anecdotally, but clinicians say that data could be better used to direct vaccinations at populations who need them most.

“We’re just counting bodies, and counting beds, and not using the information to inform the public health response,” Warner said.

Salamon, the Scarborough emergency physician, questioned why doses aren’t prioritized for areas like hers, or Peel, or the northwest end of Toronto — where high populations of essential workers, not just seniors, have been hard-hit by COVID-19 for months.

And while there’s no question elderly Canadians in long-term care and elsewhere faced the highest death toll, Barrett stressed the need to focus on more than mortality.

“There is very clear evidence growing that a significant amount of patients infected with COVID-19 have significant long-term effects, this long-hauler syndrome,” she said.

‘The virus wins every single time’

On Thursday, Premier Doug Ford said he’s heard reports of younger adults falling ill, and vowed to keep following the advice of medical experts while acknowledging vaccinations alone won’t get Ontario through the next stretch unscathed.

“I’ve heard some people say it’s a race, the virus versus immunization,” he said. “The virus wins every single time.”

Others say this race could have been avoided in the first place by maintaining tighter public health measures.

“If we’d kept those measures for three more weeks, kept case counts down, emptied out the ICUs — we’d be in a different situation than we are now,” said Tuite.

While it’s not clear how exactly the next few months will play out, Barrett said the risk of overwhelming the health-care system — with a domino effect impacting non-COVID-related appointments and procedures — remains real. So are the risks facing younger, healthy adults.

“We’re not out of the woods. We’ve got months ahead of us,” she said. “It would just be absolutely devastating to lose a loved one at this point in the game … when we’re so close to the end.”

Tourism in Ontario’s Prince Edward County is booming. If only staff could afford to live there

Black activists across the Prairies are calling for defunding of police. Is anyone in power listening?

Vaccine etiquette: What’s safe to ask others and what’s off the table

Seller beware: Real estate agents can collect their fee even when a buyer defaults on a sale, B.C. man learns