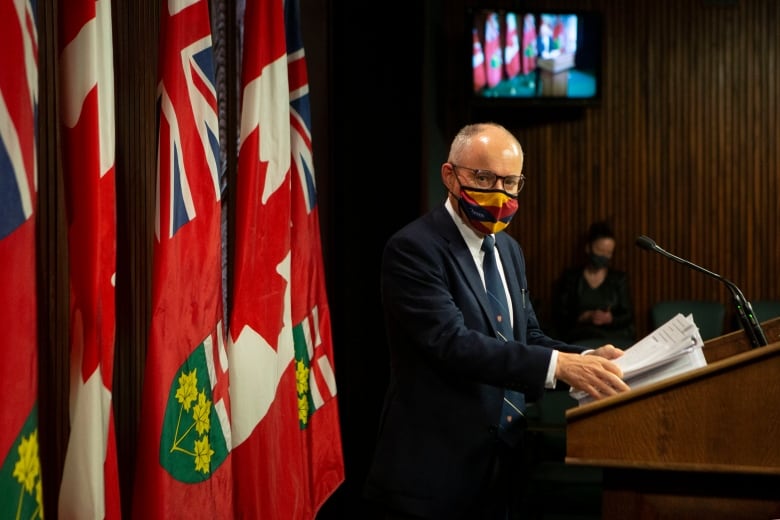 Ontario will stop reporting COVID-19 cases in schools and child care settings, memos from the Ministry of Education say, prompting criticism from the opposition New Democratic Party who called the move “terrifying for parents.”

In memos sent to school boards and child care licensees dated Dec. 30, the ministry said it is implementing new health and safety measures in schools and child care facilities, citing recent changes to its case and contact management strategy. The memos were shared in a news release by the NDP Friday.

On Thursday, Chief Medical Officer of Health Dr. Kieran Moore announced that the province is shortening isolation requirements, limiting testing to high-risk groups and reopening schools next Wednesday, Jan 5., rather than Monday. Child care programs, however, will be permitted to operate beginning Jan. 3.

In a statement issued Friday, the Ontario NDP called on the provincial government to reverse testing and tracing cuts.

“If we can’t track where the virus is, we can’t fight it,” education critic Marit Stiles said.

Here’s the relevant section of the memo to school boards related to schools. <a href=”https://t.co/ayjCfV6KUX”>pic.twitter.com/ayjCfV6KUX</a>

“Doug Ford is leaving our littlest kids unprotected, and even going so far as to stop testing and reporting — he’s trying to hide the damage, and the danger of his choices,” said child care critic Bhutila Karpoche.

“How are parents supposed to make decisions to keep their kids safe?”

Asked Thursday if the move to limit testing to high-risk individuals was a political one, Moore pushed back, saying the province would test everyone if it had the capacity.

“We have to pivot, we know there’s ongoing community activity, we know we’ll have transmission risk, that data has to focus to screen those who need treatment and to protect those in high-risk settings,” Moore told reporters at Thursday’s media conference.

The NDP’s statement also notes that children under five cannot be vaccinated and that many child care centres have been using negative PCR tests to allow a child to return after symptoms.

In a statement, the Toronto District School Board confirmed the Ministry of Education will no longer be collecting COVID-19 case numbers from school boards.

TDSB said its reviewing how reporting and notification of cases will occur moving forward.

In an interview on CBC Radio’s Metro Morning on Friday, Moore said that the province’s new metric for monitoring the spread of Omicron will be “how well our hospitals can continue to provide care” and not necessarily daily case counts.

He noted again that the province is preparing for a surge in the coming weeks.

“We’re monitoring the admissions to hospital and the ICU numbers around the clock to ensure we have capacity,” Moore said.

The province has announced major changes to its pandemic strategy, in the face of surging Omicron cases. Ontario is restricting access to COVID testing and cutting the minimum isolation period to just five days for people who are vaccinated. School, meanwhile, will resume in-person on Wednesday, two days later than planned. The changes come as record-breaking COVID numbers strain public health resources. Dr. Kieran Moore, Ontario’s Chief Medical Officer of Health, explains why. 15:59

While the Ministry of Health will suspend reporting of COVID-19 cases in schools and child care, the memos say it will still accept submissions of serious occurrences of confirmed cases of the virus from schools and child care facilities. Elementary and secondary students and staff who are symptomatic are eligible for PCR tests if they receive a self-collection kit through their schools.

Moore said absenteeism will be the main indicator for the spread.

“Given that Omicron is so rapidly spreading, we’re basically reporting on what proportion of students are absent at any given time to allow public health to concentrate on those high-risk settings,” he said.

‘All of this is avoidable’

Moore had also advised the education and child care sectors to plan for potentially higher than normal absenteeism in the coming weeks, with widespread community transmission of Omicron expected.

With the latest announcements on schools and child care, infection control epidemiologist Colin Furness said he feels “abandoned” by the province.

“We’re in for a really rough ride for the next few weeks,” he told Metro Morning on Friday. “I feel that kids and teachers have been abandoned. We’re set up to be mass infected over the next several days, and we don’t have the health supports in order to be able to deal with that.”

“All of this is avoidable, so I’m feeling pretty unhappy,” Furness said.

“We could have built up the testing capacity. There’s no question we could have. We made a conscious decision as a province not to do that. We’ve had 20 months. The technologies are there. We decided not to.”

Furness has now written a letter to Toronto Public Health and Peel Public Health asking them to delay school openings for 13 school days. He believes that’s enough time to get through the Omicron wave and vaccinate more staff and children.

“There’s no question that we are going to see much of the population in Ontario exposed, from infants all the way to long-term care home residents and our health system can’t cope with that,” he said.

In an email to CBC News, Toronto Public Health did not confirm receipt of the letter, but said it was reviewing the provincial announcement and will provide updates to the public when details are confirmed.

Education minister has not spoken publicly

In his interview on Metro Morning, Moore said he believed Minister of Education Stephen Lecce would speak publicly Friday about school reopenings. CBC News has made repeated attempts to contact the minister of education and received a response on Friday night.

In an email statement, Ministry of Education spokesperson Caitlin Clark said it is following Ministry of Health requirements.

“As per the new Ministry of Health requirement, no sector will have access to the accurate case data, including in the education sector, which is required in order to report COVID-19 cases in schools and child care settings,” Clark wrote.

“We will continue to report school and child care closures and will be providing school boards with updated operational guidance on reporting expectations of absences and closures.”

The ministry also reiterated Moore’s comments on focusing on high-risk Ontarians as part of the province’s pivot in strategy.

The ministry of education has announced it will provide children in schools and child care with three-ply cloth masks to encourage use of a higher quality mask, while staff will have the option for a non-fit-tested N95 mask.

The province says anyone with symptoms suggesting COVID-19 must self-isolate, regardless of vaccination status. However, that isolation period has been reduced to five days, and applies to everyone in the household.

Schools and child care programs qualify for rapid antigen tests and the ministry of education said it will expand access to them. It’s also deploying 5,000 standalone HEPA filter units, it said in its memo Friday.

According to the memo, “all schools are required to reinstate daily on-site confirmation of screening for all students and staff until further notice.”

In the event of staff shortages, child care facilities are asked to assign staff and children to different groups to accommodate staffing needs.

Medical director of critical care at Michael Garron Hospital Dr. Michael Warner agrees with Furness regarding the need to wait to reopen schools.

In a video posted on Twitter, Warner says a one-to-two week delay in reopening schools and child care can help prioritize boosters for education staff.

“Their environment is no less risky than mine,” he said. “In one or two weeks the peak may be past us.”