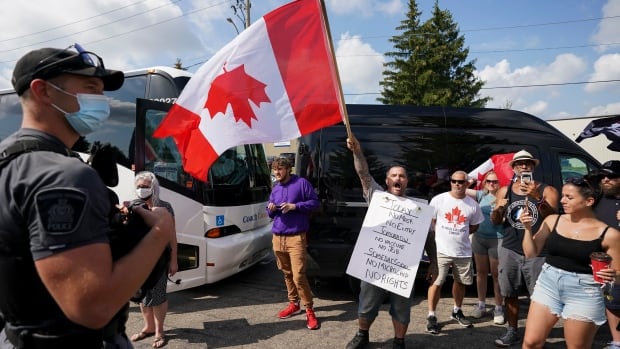 A Kitchener, Ont., man has pleaded guilty to threatening Prime Minister Justin Trudeau during a campaign stop in nearby Cambridge last summer.

On Aug. 29, 2021, Trudeau visited a business in Cambridge to make a speech. Police at the time said he was forced to delay his appearance due to a protest, which involved up to 200 people.

During the protest, people shouted obscenities and uttered death threats against Trudeau. They also hurled racist and misogynist insults at people of colour and women in the Liberal leader’s protective detail.

On Sept. 10, 2021, Waterloo regional police said a 32-year-old Kitchener man was arrested and charged with two counts of uttering threats.

Court documents show a similar rally was previously held in Barrie, where it is believed that Dyer attended.

Following the August incident, local police initially said no one was arrested or charged. However, an investigation was launched soon after based on information from the RCMP, witnesses and a video posted to social media.

Court documents said that following his arrest in September, Dyer admitted to attending the rally and reiterated his political positions.

Dyer has been released on his own undertaking and is set to be sentenced on Oct. 20, 2022.

The assistant crown attorney confirmed his second charge will be withdrawn following sentencing.

Dyer’s legal representative did not respond to a request for comment in time of publication.