Ontario gets road map for building 1.5 million homes in next decade 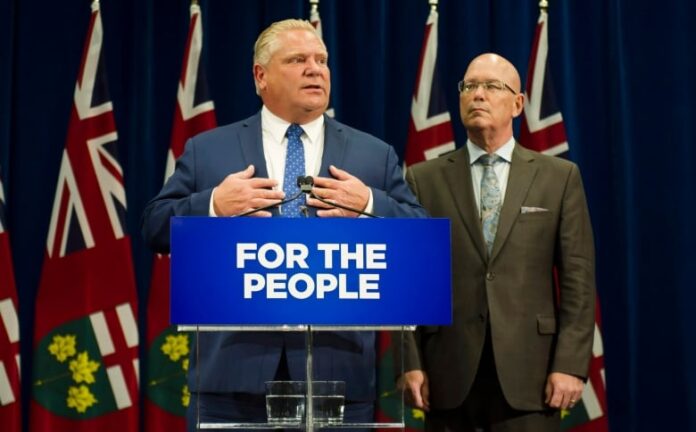 Ontario should aim to build 1.5 million new homes in the next decade by increasing density in urban and suburban areas and by drastically overhauling how cities approve housing projects, says a new report commissioned by Premier Doug Ford’s government.

The Housing Affordability Task Force makes 55 recommendations aimed at reining in home prices by dramatically boosting the supply of housing. The cost of buying the average home in Ontario has nearly tripled over the past 10 years.

The report is to be released publicly on Tuesday morning, less than two months after Ford and Minister of Municipal Affairs and Housing Steve Clark appointed the task force. The government provided CBC News with a copy in advance.

“We are in a housing crisis and that demands immediate and sweeping reforms,” says a letter in the report from task force chair Jake Lawrence, CEO of Scotiabank Global Banking and Markets.

Immediate reforms could be in place before Ontario’s provincial election on June 2. Ford’s Progressive Conservatives intend to bring in legislation responding to the task force report during the upcoming sitting of Queen’s Park, a senior government official told CBC News.

Housing affordability is one of the top concerns of Ontario voters, according to recent polling. Ford and his ministers have frequently raised the soaring cost of housing as an issue of late and touted boosting supply as the solution.

The task force’s proposed changes would lessen the power that cities have over housing developments by giving the province the authority to impose standards related to zoning, density and urban design.

“The way housing is approved and built was designed for a different era,” Lawrence writes. “The balance has swung too far in favour of lengthy consultations, bureaucratic red tape and costly appeals.”

Some of the report’s key recommendations:

“The province must set an ambitious and bold goal to build 1.5 million homes over the next 10 years,” the report says. That would mean doubling Ontario’s current pace of new construction. About 75,000 new housing units were started in 2020, more than in any year of the previous decade.

“A shortage of land isn’t the cause of the problem,” the report continues. “Land is available, both inside the existing built-up areas and on undeveloped land outside greenbelts. We need to make better use of land.”

The task force highlights that Toronto has just one-quarter the population density of such major global cities as New York and London.

The report includes several recommendations that echo what developers have been seeking from the province.

“Cut the red tape so we can build faster and reduce costs,” reads the title of a section on development approvals. “Municipalities allow far more public consultation than is required.”

Municipalities that fail to meet the province’s housing growth targets and approval timelines should have their provincial funding reduced, the task force says.

The report recommends significant loosening of zoning restrictions in neighbourhoods that currently allow only detached or semi-detached houses.

If put in place, the change would automatically allow secondary suites, garden suites, laneway houses and multi-tenant housing in residential neighbourhoods. The report also urges the automatic approval of up to four housing units on any residential lot.

The task force takes particular aim at “not in my backyard” opposition to development.

“NIMBYism is a large and constant obstacle to providing housing everywhere,” the report says. “We cannot allow opposition and politicization of individual housing projects to prevent us from meeting the needs of all Ontarians.”

Planning has become politicized “because local councillors depend on the votes of residents who want to keep the status quo,” the report says. It notes that pushback from existing residents keeps new residents out of neighbourhoods, delays development approvals and increases housing costs.

The task force makes six recommendations designed to speed up the process at the Ontario Land Tribunal, the body that hears appeals on development projects, formerly known as the Ontario Municipal Board.

One proposal would “weed out or prevent appeals aimed purely at delaying projects” by giving the tribunal the power to refuse to hear cases unless the appellant proves it has merit from the outset.

The task force wants the province to have the power to review how cities spend development cost charges to pay for facilities and infrastructure, as well as “Section 37” charges that go toward community benefits in exchange for higher-than-permitted density.

The report is silent on demand-side issues that could be driving up the price of housing in hot markets. More than one-quarter of home purchases in Ontario are currently made by people who own multiple properties, outnumbering demand from first-time homebuyers or people who are moving.

The report also fails to recommend any changes to real estate sales and marketing practices, such as blind bidding.

The task force report is just one part of the government’s consultations with municipalities, the public and industry on the housing supply, said a spokesperson for Clark, the municipal affairs ahd housing minister.

“A common theme we have heard in our consultations is that it takes too long for housing to get built,” Clark’s director of communications, Zoe Knowles, said in an email to CBC News. “Lengthy processes and delays drive up the cost of housing, which are passed on to homebuyers and renters.”

Housing affordability has been on Ford’s political radar for several months, as previously reported by CBC News. The polling firm contracted to do research for Progressive Conservative MPPs was asking voters in November what the provincial government could do to make housing more affordable.

Last fall, Ford frequently complained that municipalities were too slow to approve housing developments. In January, the premier hosted a housing summit with the mayors of all Ontario cities having a population of 100,000 or more.