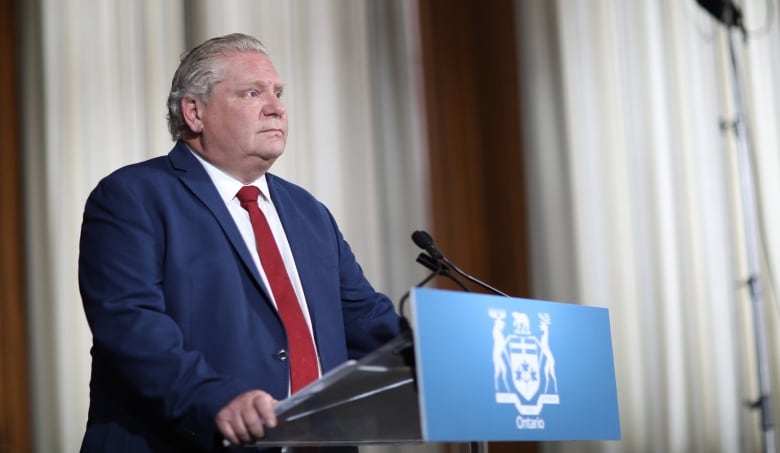 Premier Doug Ford is signalling that he could announce the next phase of loosening Ontario’s pandemic restrictions as early as next week, despite a recent uptick in new cases of COVID-19.

“I was through all sorts of charts this morning, and overall, things are looking more positive,” he said during his daily news briefing on Thursday.

Ford said the question of moving to Ontario’s Stage 2 of reopening is now being considered by the senior officials who form the COVID-19 command table. Stage 2 would allow a wider number of office-based businesses to reopen and expand the maximum size of social gatherings that’s currently limited to five.

“Hopefully over the next week, we’ll be able to discuss it with the people of Ontario,” he said in his briefing on Wednesday.

The province’s top criteria for further easing its semi-lockdown is a consistent decline over a two- to four-week period in the daily number of new cases.

That benchmark has not declined consistently in the three weeks since May 14, when Ford announced Ontario’s first stage of looser restrictions, including allowing non-essential retail stores outside of shopping malls to open for customers.

Since that date, Ontario’s daily number of reported new cases dipped below 300 only twice. The daily average in that period has been 371. The average number of new cases daily has trended upward for the past week.

By contrast, Quebec’s daily number of new cases has steadily declined since early May and has been below 300 for each of the past four days.

British Columbia has not reported more than 30 cases in a single day since May 6.

Ontario Health Minister Christine Elliott sounded less bullish than the premier about the prospect of a move to loosen restrictions.

“We have had a number of conversations about what would be included in Stage 2,” Elliott said Thursday. “We can’t say exactly when, but we need to be prepared for it when we do get to that point.”

Elliott said the daily count of new cases has “gone back and forth” in the past week to 10 days.

“The numbers are gradually going down. We’re going to need to see that to continue,” she said.

There are some positive trends in Ontario’s data reported by the provincial Health Ministry:

Still, the province’s top public health officials have indicated that it’s essential they see a steady reduction in the number of daily new cases daily before recommending a move to Stage 2. A look at the case numbers by their “episode date” (the estimated date of infection, according to the Public Health Ontario interactive data page) shows no sign of a downward trend through the end of May.

While 76 per cent of the province’s active cases of COVID-19 are in the Greater Toronto Area, outbreaks among agricultural workers have caused spikes in case numbers in the Niagara region and southwestern Ontario.

Ford offered some hope of a quick reopening in parts of the province that are far less affected by COVID-19 by reversing his previous opposition to a regional phaseout of restrictions. He said the recent spate of outbreaks on farms, primarily in southwestern Ontario, will not scupper such a regional reopening.