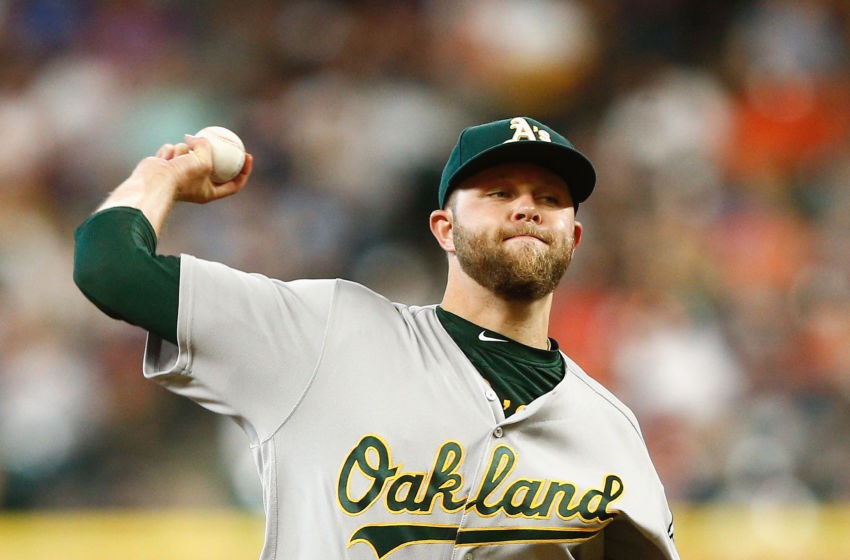 First things first, big league debuts are awesome. Even when they go poorly, watching a (usually) young man’s dream come to fruition is awesome. There’s usually family present, usually tears a flowing, and for a brief moment in your team’s miserable existence, everything is right. It’s a wonderful aspect that is largely unique to baseball, a sport where it takes years to reach the zenith.

Fortunately, Paul Blackburn’s debut was pretty darn awesome. Both from a results and and eyeball perspective, he impressed enough to land him a second start with the A’s.

Whenever a back-end starter comes to the bigs, you have to ask yourself the Dillon Overton question. Overton as you well remember, put up fine minor league numbers only to be lit up upon arriving in the bigs.

Overton’s problem was a lack of stuff, something he just couldn’t overcome by mixing and matching or spotting pitches with pinpoint accuracy. An injury sapped the velocity that made him a early draft pick, and the A’s let him go shortly after his debut. He just didn’t posses the ability to get outs at the big league level without those extra miles per hour.

So with Paul Blackburn’s first start in the books, we can ask that question about him. And we have a good answer, in a small sample size: his stuff looked good enough for him to be a big league piece! Not necessarily someone you count on all year long as a starter, but definitely someone the A’s can have around to take some starts, eat some innings, and maybe more. He throws reasonably hard with a sinker that can get outs on its own, in addition to secondary stuff that’s functional at least.

The sinker was pretty darn decent. It’s not nearly a Graveman two-seamer that can survive by itself, but for a pitch that he can throw for a strike at any time that he will undoubtedly throw quite often. Having a primary pitch that he can spot and that’s also not a liability even when used frequently is huge. It can help him maintain some consistency, often a sticking point for backend guys.

A good indicator is Blackburn’s batted ball profile, which translated nicely in his first start. Of the 18 balls that were put in play, 9 were on the ground. That’s a slightly lower rate than he saw in the minors, but one he could get by with at the big league level. Getting groundballs and inducing weak contact is vital to Blackburn’s success, as he only strikes out 16% of the hitters he faces. Inducing ground context will be vital to his success.

Blackburn had good command with all of his pitches, open to using breaking and offspeed pitches in all counts. That’s big, as hitters can’t just sit on the sinker in all counts, even though he throws it a lot. Melvin and co. talked up his sinker mostly, but his slider and change were both solid. He’s got four legitimate pitches and while none of them will blow hitters away or induce swing and misses at high rates, they can keep hitters off balance.

The stuff is of course, far from world class but exciting still. He showed at least an aptitude to be successful going forward and that’s all you could really hope for in his first start.

As he takes the hill tonight, pay most attention to his command and the contact it induces. The Mariners hit the ball in the air much more than the Braves, so working down in the zone and hitting his spots with his sinking stuff is paramount. He has to get the ball on the ground and to do that, he’s got to be consistent at avoiding mistakes.

A big concern for Blackburn going forward will be limiting home runs. He’s never had issues with it in the past, and we can hope he won’t going forward. But the ball is juiced (probably) and loads of prospects are coming up and giving up the long ball like never before. That’s pertinent to Blackburn who just doesn’t miss bats quite like elite pitchers of today. It’ll be vital he continues to keep the ball on the ground since more and more balls in the air are leaving the yard.

Also, and this goes without saying, but contact pitchers generally struggle in front of this….defense. Things have improved with Brugman in center and Chapman at third and they could get even better as the year wears on. But for now, grounballs will sometimes become doubles which is even more of a struggle for a rookie who doesn’t miss bats than it is for established pitchers.

The demotion of Jesse Hahn

Personally, I found the demotion of Jesse Hahn rather surprising. Prior to the past two starts against the Astros, Hahn had been pretty darn good, holding a 3.56 ERA and 2.88 over 12 outings and 11 starts

It’s obviously not fair to just ignore two horrendous starts, but it seems a bit rash to go off so few as well. Hahn has spent ample time in AAA and has little to learn or do there. With a Tommy John surgery already in his past in addition to a lost season in 2015, Hahn’s arm seems like a bit of a ticking time bomb. There’s a chance the guy is having some dead arm or some sort of health issue, as his profession is noted murder on the arm.

Anyway my point here is that sending him to Nashville seems like a foolish thing to do. If his slightly decreased velocity is a concern, DL him. Shuffling him down seems wasteful and dumb, no matter how well Blackburn pitched.

That’s just my hot take though, and I’m not married to it. Your thoughts on Hahn going down in favor of Blackburn?