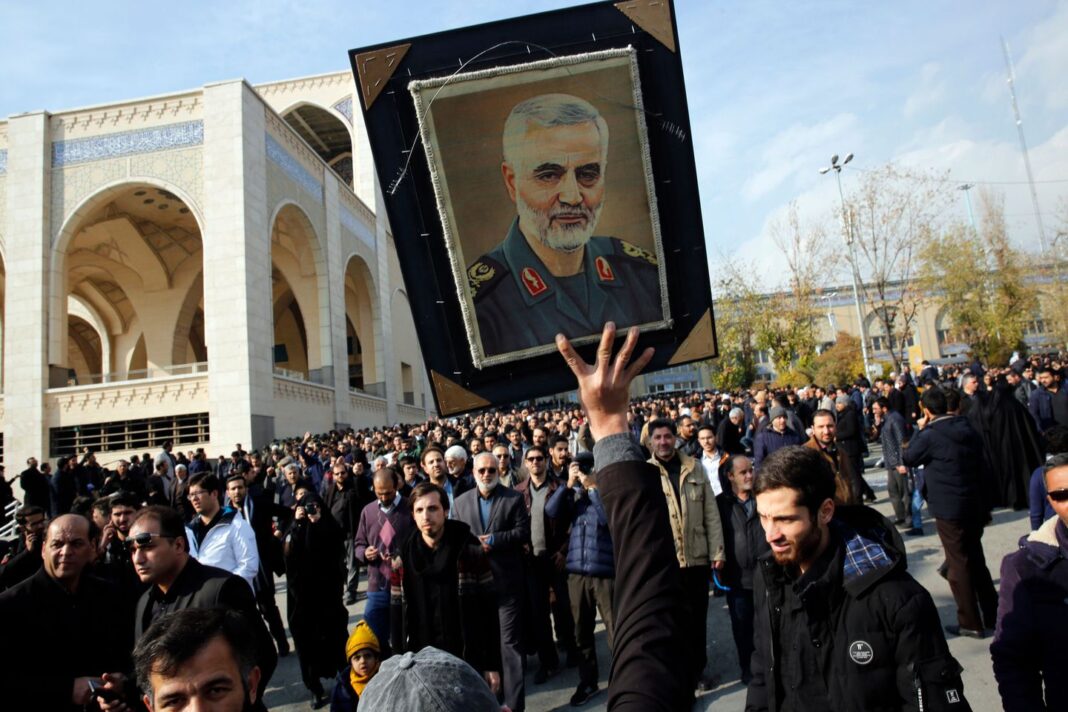 Oil prices spike, Dow dives after U.S. airstrike kills top Iranian military leader, The killing of Maj. Gen. Qasem Soleimani, commander of Iran’s Quds Force and whose car was struck by a missile as he was leaving the airport in Baghdad early Friday, was described by Iranian President Hassan Rouhani as a “cowardly and vicious act.” “Iran will take revenge for this heinous crime,” he said.

Iran’s defense minister, Amir Hatami, said the strike by the “arrogant U.S.” would be met with a “crushing” response. Foreign Minister Mohammad Javad Zarif called the strike an “act of international terrorism” and said in a tweet that the United States “bears responsibility for all consequences of its rogue adventurism.”

An obvious point of vulnerability is the narrow Strait of Hormuz, hemmed in by Iran’s southern coast. About a sixth of the world’s oil supply passes through the waterway, which is 21 nautical miles wide at its narrowest point and has been deemed “the world’s most important chokepoint” by the U.S. Energy Information Administration. The quantity of oil ferried through the strait — much of which is headed for China, India, and Japan — is nearly double that of all U.S. oil production. Should threats of attack close the passage, there could be devastating consequences for the world economy.

Other potential Iranian targets are oil fields and facilities in Iraq or Saudi Arabia.

Two oil tankers in the Persian Gulf were crippled by attacks in June, and drone strikes on state-owned Saudi Aramco in September temporarily took 5.7 million barrels of crude, or 6 percent of worldwide consumption, out of daily circulation, causing the biggest daily jump in oil prices since 1988. Production was restored within two weeks, and price increases following both incidents — as much as 15 percent following the drone attack — quickly subsided.

In a note issued late Thursday, ClearView Energy Partners, a research firm based in Washington, said it is reasonable to expect Iranian reprisals “possibly via all three avenues Iran has pursued in the recent past: (1) targeting regional shipping and energy production; (2) proxy (and principal) attacks against U.S. assets and allies, including cyberattacks; and (3) further nuclear brinkmanship.”

Any one of those, it said, would send oil prices higher. The note also argued that market prices continue to suggest undue faith in “Iranian rationality and U.S. restraint.”

Robert McNally, president of Rapidan Energy Group in Bethesda, wrote in an email: “Direct attacks against U.S. personnel, diplomats or vessels or a return to targeting [Persian] Gulf oil infrastructure or tankers could easily add another $5-10 dollars per barrel to the price. Should conflict escalate to an all-out conventional conflict including the U.S. and Iranian militaries in the Gulf, crude prices could spike into the triple-digit range.”

In a paper issued last summer assessing the impact of conflict in the region, Rapidan argued that a disruption in the Strait of Hormuz could last “for many weeks, if not longer.” It suggested that a major U.S. military operation would see oil prices spike, recede, but then grow steadily higher again as expectations of a “quick and total victory” would undoubtedly be proved wrong. It also predicted that in such a case China would immediately begin hoarding oil, quickly sending prices even higher.

But analysts agreed that all they can do at this point is speculate.

“While there is no immediate, direct impact on oil supply from Iran or any other country, events such as this have the effect of raising the geopolitical risk premium in oil prices,” said Pavel Molchanov, an oil analyst with Raymond James. “We will need to watch how Iran responds, and whether its response might lead to an actual supply disruption.”

Molchanov pointed out that shutting down the Strait of Hormuz, while dramatic, would cause serious damage to Iran’s own economy, which is already struggling under the weight of American sanctions. They have cost the nation $200 billion in revenue since being imposed in 2018, pushed inflation up to about 40 percent, and created food shortages.

McNally said there could, conceivably, be a bright side. He expects the killing of Soleimani to bring the U.S.-Iran confrontation to ahead, and that raises the possibility of an eventual deal that could exert downward pressure on oil prices. But there could well be some difficult moments before that happens.

On Friday morning, Brent Crude rose nearly 4 percent before dropping back an increase of about 3.5 percent later in the day. West Texas Intermediate was up just shy of 3 percent. Oil company stocks also climbed

In Russia, the world’s second-largest producer of oil after the United States, the stock index hit an all-time high on the news from Baghdad.

But in New York, Wall Street’s euphoric start to 2020 took a sobering hit, with the Dow Jones industrial average falling more than 340 points at the opening bell. The blue-chip index clawed back some of those losses and closed the day down 234 points, or 0.8 percent, to finish at 28,634. The Standard & Poor’s 500 indexes ended the day at 3,234, down 0.7 percent. The tech-heavy Nasdaq composite lost 71 points, 0.8 percent, to settle at 9,020. All three indexes had set record highs Thursday, the first day of trading of the year.

Gold, a haven for investors in tumultuous times, jumped 1.6 percent to $1,552 an ounce, a four-month high.

Oil prices were dampened all through 2019 by a huge worldwide oil glut; the year also saw the United States become the global leader in oil production, exporting petroleum for the first time in decades. Both developments could serve to mitigate the effects of a Middle East military escalation, analysts said, although Saudi and Russian decisions to cut production in December have helped to prop up the price.

Kilduff cautioned, as well, that the risks to oil production in the Middle East are real and have probably not been adequately reflected in the world’s oil price.

U.S.-Iranian tensions have been building since 2018, when Trump pulled out of a 2015 nuclear deal and reinstated sanctions.

Saudi Arabia, Iraq and Kuwait have grown in importance as U.S. sanctions have helped push Iran and Venezuela — once major producers — off the oil supply grid. Iran’s oil minister has accused the United States of imposing the sanctions to gain market clout as it enjoys a shale boom. The Energy Information Administration predicts the average American output will reach 13.2 million barrels per day in 2020, an increase of 900,000 barrels per day from 2019.

The Strait of Hormuz is crucial to the major Asian economies, including China, South Korea, Japan and Indonesia. Saudi Arabia, for example, is the largest supplier of crude oil to China, eclipsing Russia this past year.

More than 70 percent of Saudi crude production, about 5 million barrels a day, is earmarked for Asia. But major consumers such as Japan, India and South Korea have been shifting to North American oil sources during the past year because of the fear of disruption in the Middle East, according to S&P Global Platts. Those concerns were amplified by the attacks on oil tankers and strikes on Saudi oil fields in 2019.