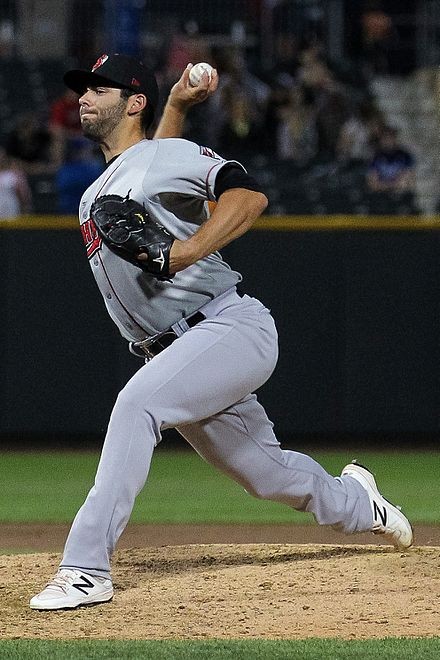 Two Oakland A’s prospects combined to throw a no-hitter for the Single-A Beloit Snappers on Wednesday. Zack Erwin started and went the first six innings against the Quad Cities River Bandits, and Joseph Camacho relieved him for the final three frames of the 3-0 victory. Four batters reached base, via two walks and two errors, but one was picked off by Erwin and another was eliminated in a double play. The box score: 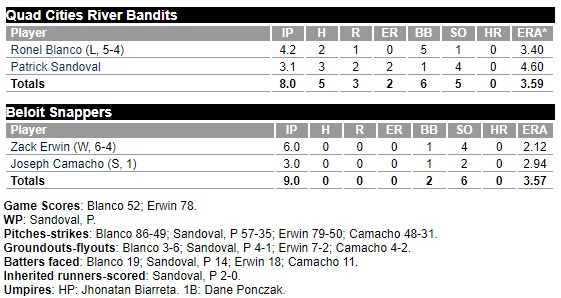 Erwin is in the middle of an excellent bounce-back season, which we talked about earlier in August. After coming over in the Brett Lawrie trade as a solid prospect (4th-round draft pick) with fast-track potential, the lefty suffered a lost year in 2016 at High-A and was beset by injuries — here’s more about his return to health, from Bill Seals at Oakland Clubhouse. He’s now 17 starts into a strong campaign at Single-A, and this latest effort was his best yet. More from Seals:

As his fastball velocity has ticked back up to between 88 and 92 miles-per-hour, he has made some subtle adjustments to his two off-speed offerings.

“I’ve always thrown a curveball and slider, but now I’ve focused on making the slider shorter and tighter, and the curveball more 12-to-6 when I throw it,” he said. “The curveball is bigger and the slider is shorter, so there’s a differentiation between the two.”

As for Camacho, he didn’t quite make my recent list of low-minors sleepers but I very nearly included him. The 23-year-old right-hander has kept a high K/BB rate, particularly by limiting the walks. One scouting report has him as a deceptive soft-tosser with a wide arsenal of secondary pitches.

This isn’t the first bit of recent no-hitter drama between these two teams. Earlier in August, Quad Cities took a no-no into the 9th against Beloit, but infielder Josh Vidales broke it up with a single. It’s also not the first such gem by an A’s affiliate this year — Triple-A Nashville pulled one off in June, anchored by starter Chris Smith and reliever Simon Castro. High-A Stockton was on the wrong end of one in April.

This was the fifth no-hitter in Snappers franchise history, dating back to 1982, and their first since 1996 (then a Brewers affiliate). They themselves fell victim to one just last year, though, by the Clinton LumberKings.

As long as we’re talking about the Snappers, let’s do a quick update on the rest of the team. There’s really no one left in the lineup who’s meaningfully on my radar — that’s not to say there’s no hope for any of them, but the ones who had truly promising seasons are already up in High-A. One possible exception is 20-year-old infielder Jesus Lopez, who has been kicking around the lower minors for a couple years but is finally doing some hitting. (Playing second base this year.)

Otherwise, there are a couple more sleepers on the pitching staff beyond Erwin and Camacho. Quick stats (all are RHP):

Congrats to Erwin, Camacho, and the Snappers on a great night of baseball!