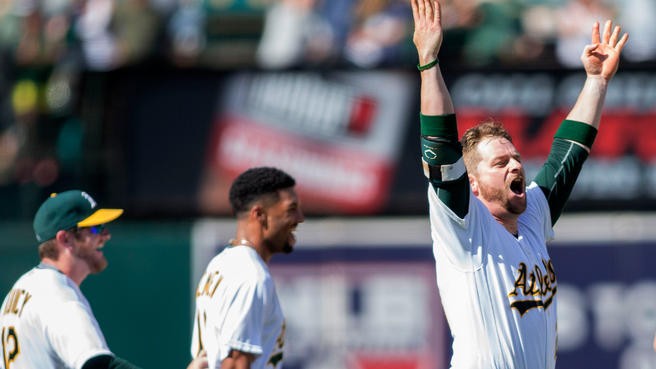 The Oakland A’s optioned pitcher Frankie Montas to Triple-A Nashville, the team announced Sunday morning. An extra 26th man had been added for Saturday’s doubleheader, which meant someone had to go back down the next day. With nine relievers on board, the 24-year-old right-hander was the odd man out.

Montas ranked No. 5 on our Community Prospect List last winter, largely on the strength of his elite velocity. However, his command hasn’t caught up with his stuff yet, and he’s struggled both in terms of wildness (4.7 BB/9, 11.1 BB%) and hard contact (2.8 HR/9). Each of his pitches has been hit hard, but his changeup took the biggest beating.

Over his last three games, Montas faced 17 batters and retired six of them — 8 hits, 2 BB, 1 HBP, for 8 runs. Take it out to his last four outings, and he’s retired half of his 28 batters for a 19.29 ERA. Looking at his overall season numbers, his ERA is high and his FIP suggests he’s earned every bit of it.

Having said all that, there is plenty of room for optimism. First and foremost, Montas has been healthy this year, which was the top priority after he missed nearly all of 2016 to injury. He’s commonly touched the triple-digits with his fastball.

Furthermore, he’s still missing bats, to the tune of a strikeout per inning and a 12.1% swinging strike rate (league average is 10.4%). His stuff is working some of the time and he’s not completely overmatched, he’s just making too many mistakes along the way. This kind of peripheral success is an encouraging sign amid otherwise gross numbers, especially for a pitcher who’s had some rust to shake off this year.

Montas has plenty to work on and it’s definitely time for him to take another tour of Triple-A, but this is just the beginning of the road rather than the end of it. Putting him on the Opening Day roster was a fairly aggressive move, and now he’s picked up his first MLB experience since 2015 (w/ White Sox). The next step is to adjust and come back stronger down the line.

… with Ryan Dull and Bobby Wahl on the DL.

Next man down: Unless anything changes over the next couple days, 1B/OF Matt Olson will likely go back down to Triple-A to make room for RHP Daniel Gossett, who will make a start next week in Miami in place of the injured Andrew Triggs. Olson came up Saturday when Triggs went on the DL.