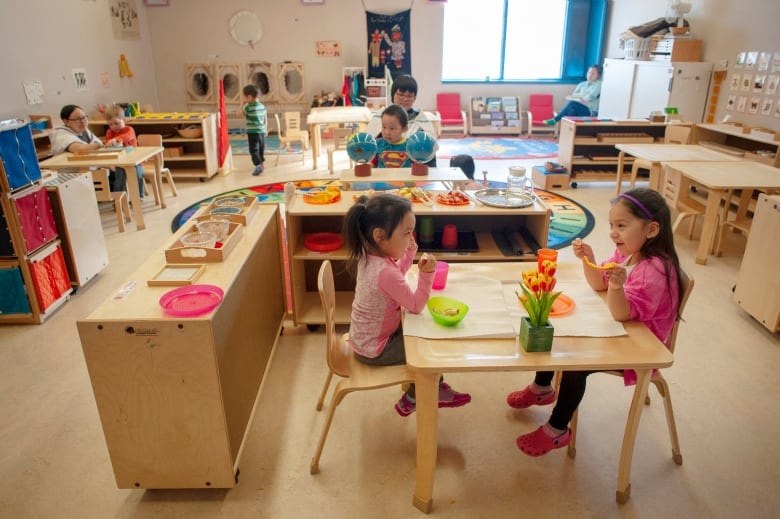 Nunavummiut families will be seeing $10-a-day child care much sooner than anticipated.

According to a joint news release from the federal and territorial government, as of Dec. 1, Nunavut will be the first jurisdiction to achieve $10-a-day for licensed child-care centres under a Canada-wide early learning and child-care system.

Pamela Gross, Nunavut minister of education, said her ministry has been working with the federal government on the agreement — worth $66.1 million over the next five years. The news release said that could save families up to $55 per day for each child in care, when compared to current rates.

“For families, that will mean a big savings for people across our territory,” Gross said in an interview with CBC News.

Nunavut signed on to the Canadian government’s child-care deal in January.

The initial plan announced at the time was to create $10-a-day child care by March 2024, two years ahead of the federal target. Gross said a deal was worked out to start the program this year, rather than the initial plan to reduce fees by about half by the end of the calendar year.

“We’re just so delighted and happy to be able to get to $10 a day at an accelerated rate and bypass the 50 per cent reduction fees, which we were anticipating with the department, and go straight to a better option,” she said.

Gross said creating new daycare spaces in the coming years is also on the to-do list within the deal to help alleviate the high demand for child care. She said the department has already helped support the creation of 30 new spaces across the territory, and that the “overall goal” is to get to 238 new spaces.

“This will be a great addition to helping support child care in Nunavut and to having more spaces available for Nunavummiut. To have their child or children go to either a daycare or a day home will be instrumental in family’s lives,” Gross said.

She said one of the biggest challenges when it comes to expanding child care is infrastructure, but said “with partnerships with the Inuit organizations and with the federal government, I know that this will really help support the creation of those spaces.”

This could mean either brand new facilities or modifying existing ones, she said.

The deal signed in January also declares a commitment to Inuit-specific Indigenous early learning and child-care services. Funding for those services are being implemented in partnership with Nunavut Tunngavik Inc. and other Nunavut regional Inuit associations.

Gross said the department is working on an assessment of wages for daycare providers and employees, and plans to make an announcement on that next year. The goal is to offer wages that reflect training and years of experience and improve recruitment, and there could also be incentives for certification.

“We look forward to working on that piece. And I know that the department is doing its best to figure out where people are on the wage grid, and on working to standardize it is something that we look forward to doing over the next year,” she said.

“I think that wage enhancement will really help the variation of salaries across the daycare facilities and help retain and recruit more people.”

Gross did not say how much the wage could increase. However, the news release says Nunavut proposes to use over 20 per cent of the funding in the agreement “to support their workforce through higher wages.”

When it comes to licensed facilities, Gross said the department is working with some of the day home providers to ensure that they become licensed. She said if a daycare is not licensed, it won’t be eligible for the $10-a-day program.

In a written statement in the release Karina Gould, federal minister of families, children and social development, called the implementation of $10-a-day child care a “a major achievement.”

“This achievement,” Gould said, “will make a real difference for families, as parents across the territory will see hundreds of dollars in savings each month.”