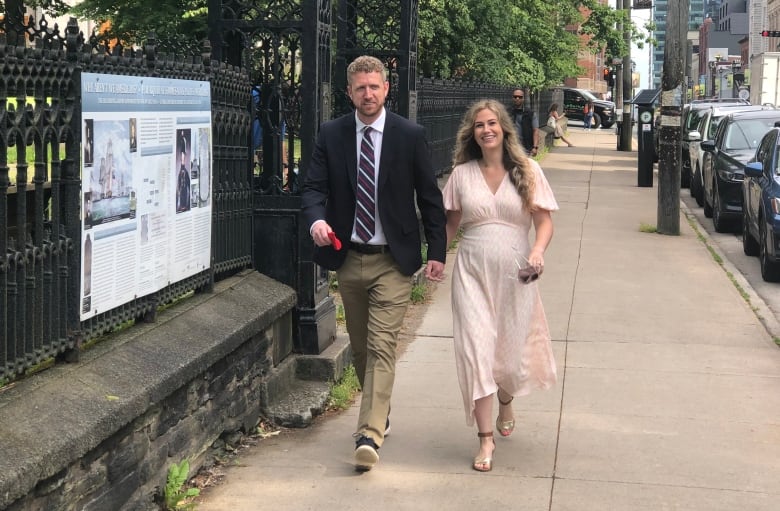 “This province is at a pivotal moment, and we need to continue to make the right decisions for workers, for seniors, for families and for all Nova Scotians,” Rankin told reporters gathered outside Government House in downtown Halifax.

“This election will be about how we best position the province for a strong economic recovery, one that focuses on investments in infrastructure and green technology and renewable energy. And I couldn’t be more optimistic about the potential of this province.”

The announcement comes after weeks of funding announcements across the province, including plans to build hundreds of new long-term care beds and an agreement with the federal government to bring affordable child care to Nova Scotia.

Rankin addressed the fact the election will happen during a provincial state of emergency related to the COVID-19 pandemic. Nova Scotia has five known active cases, as of Saturday, and Rankin noted the province is in Phase 4 of its reopening plan.

“It’s time,” he said. “We need to talk to the province about our ideas and our optimistic vision for the future. I think there are contrasts in what the other parties are proposing.”

Speaking at his own campaign launch, NDP Leader Gary Burrill touched on familiar themes to outline what he believes the election is about, including the need for better support for long-term care, a $15-per-hour minimum wage, sick pay benefits for everyone, permanent rent control and access to same-day or next-day walk-in mental health care.

“This election is about all these people and about an awful lot more people, and what is going to actually concretely happen to either improve or to not improve their lives, depending on the outcome of the election that’s been announced this morning,” Burrill said in a Halifax neighbourhood, backed by a group of supporters.

He also took aim at Rankin’s pledge to balance the budget within four years, a plan that budget documents show would result in a cut of $209 million to department spending next fiscal year.

“We have two roads in front of us: one of cutting, shrinking, contracting, and another of seeing the needs that have emerged in front of us over the last 18 months and expanding by turning to, addressing and applying the government of the people of Nova Scotia to those needs.”

The NDP plans to release a so-called vision document on Sunday, outlining the party’s 10-year plan for the province. The party is promising to release its full four-year costed platform by the middle of the campaign. With people being encouraged to vote early, party officials acknowledge there is little time to waste in getting their message out.

Tory Leader Tim Houston used his campaign launch to show off the party’s most diverse slate of candidates ever, and to position the race on a most traditional theme.

“There is one question to be answered in this election: who can actually fix health care?”

Houston pointed to the waitlist for people needing a doctor in the province approaching 70,000 people, increased wait times for mental health support and the need for more long-term care beds as examples of what he said are the failings of eight years of the Liberals in power.

Long before the campaign launched, the Tories released detailed, costed plans for health care and long-term care and Houston said his party’s fully-costed election platform would come next week. On Saturday, speaking in the lobby of a building at Dalhousie University in Halifax, Houston took aim at the wave of funding announcements the Liberals made in the run up to the election call.

“It is not a coincidence that Iain Rankin spent the last three weeks trying to buy your votes,” he said. “The Liberals know what we know.”

Houston went on say that Rankin’s short tenure as premier has been enough to show he isn’t ready to lead the province beyond the pandemic.

“The premier treats the bad things that happen as bad luck, but it’s not bad luck,” he said.

Heading into the campaign, Rankin’s Liberals held 24 seats in the legislature, the Progressive Conservatives held 17 seats and the NDP had five seats. There are three Independents and two vacancies.

Rankin, who was elected leader of his party in February — succeeding the retiring Stephen McNeil — will be looking to earn the Liberals their third successive mandate in what is the 38-year-old politician’s first campaign as leader.

This will also be the first election for the Progressive Conservatives with Houston as their leader, while Burrill leads the NDP into a campaign for the second time.

A Liberal campaign launch event is scheduled for 6:30 p.m. AT in Halifax.

Regardless of the result, the makeup at Province House following the vote will look different, given the return of four seats for the so-called protected districts of Argyle, Clare, Preston and Richmond, and the creation of new seats to reflect population growth and redistribution in certain areas. In 2017, voters elected 51 MLAs. It will be 55 this time.

Also notable is the number of retirements by veteran MLAs heading into this vote. Thirteen people are not reoffering, including 11 Liberals, one New Democrat and an Independent.

Lori Turnbull, an associate professor of political science at Dalhousie University and director of the school of public administration, said some of those seats will naturally fall to the party that’s held them, but others might now be in play.

“Having all of those people — a lot of them ministers — a lot of those sure things step aside, I think, gives Rankin a bit of an opportunity to put his own stamp on the party, to recruit his own candidates who are loyal to him and don’t see this as just a continuation of the McNeil government,” said Turnbull.

“But also, that’s a lot of work for the party. It’s a lot of recruitment of candidates, it’s a lot of training of people, a lot of bringing that up to speed. I think it’s possible we’ll see quite a few shifts.”

Challenges and opportunities for all parties

Having an election in the summer and against the backdrop of COVID-19 will be challenging for all parties, said Cape Breton University political scientist Tom Urbaniak. It won’t be a traditional campaign in the sense that there won’t be big rallies and opportunities to gather lots of people together, meaning it could be a quiet affair.

The Liberals might calculate that as an advantage, given that almost all the political profile in the province has fallen to Rankin via COVID-19 briefings. But Urbaniak offers a bit of caution to that theory by pointing to 2003, the last summer election in Nova Scotia.

“It seemed like a bit of a sleepy campaign. There weren’t galvanizing issues in that particular election, and yet the votes moved. The voter intentions moved and John Hamm emerged from that election with a minority.”

It might not be a long campaign, but Urbaniak believes there is still enough time, combined with Rankin’s limited experience as leader, for Houston and Burrill to potentially gain ground.

With no galvanizing issue heading into this campaign, Urbaniak expects the NDP and Tories to aim at areas where they perceive Rankin and the Liberals to be weak, including long-term care, health care, housing and poverty.

Voter turnout in the 2017 general election hit an all-time low of 53 per cent and Turnbull worries the factors at play could lead to even lower participation this time.

“I think this campaign is going to suffer for momentum,” she said.

“People are checked out with the summer. We can finally do things. Asking people to switch on to provincial politics for a while is probably — not everybody is going to do that.”