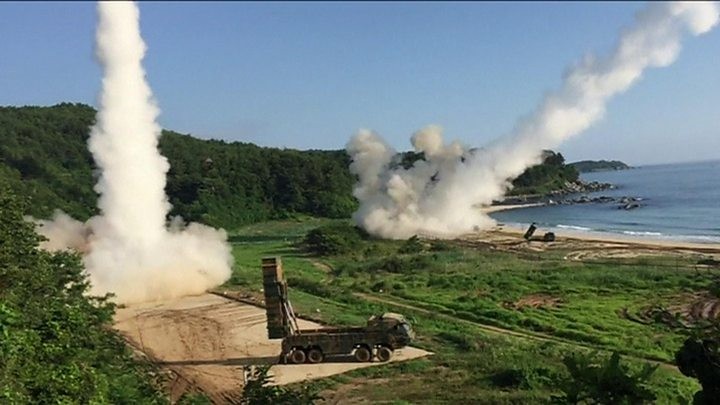 Donald Trump has criticised China following North Korea’s test of a long-range missile, criticising it for increasing trade with Pyongyang.

“So much for China working with us,” the US president tweeted.

The US and South Korea conducted a ballistic missile fire exercise in the Sea of Japan in response to the North.

China and Russia have urged both sides to stop flexing their military muscle and said they oppose any attempts at regime change in North Korea.

“It is perfectly clear to Russia and China that any attempts to justify the use of force by referring to [United Nations] Security Council resolutions are unacceptable, and will lead to unpredictable consequences in this region which borders both the Russian Federation and the People’s Republic of China,” Russian Foreign Minister Sergei Lavrov said.

“Attempts to strangle the DPRK [North Korea] economically are equally unacceptable,” he added.

The missile launch, the latest in a series of tests, was in defiance of a ban by the UN Security Council.

The US has asked for an urgent meeting of the Security Council to discuss the issue. A closed-door session of the 15-member body will take place later on Wednesday.

The US president held talks with China’s leader Xi Jinping at his Mar-a-Lago retreat in Florida in April.

Mr Trump hailed “tremendous progress” with China after those meetings.

The trade figures showing an increase in trade between China and North Korea, which he was apparently referring to in Wednesday’s critical tweet, cover the period before that April meeting.

The US president is now en route to Poland and Germany, where he will meet Mr Xi for the second time.

China, which is Pyongyang’s main economic ally, and Russia have called on North Korea to suspend its ballistic missile programme in exchange for a halt on the large-scale military exercises by the US and South Korea.

Mr Xi and Russian President Vladimir Putin, who met in Moscow on Tuesday, said “the opposing sides should start negotiations”.

Japan on Tuesday said “repeated provocations like this are absolutely unacceptable” and lodged a protest.

What has North Korea said?

State news agency KCNA quoted leader Kim Jong-un as saying the test was a “gift” to the Americans on their independence day.

The report warned of the possibility of more tests, saying he ordered officials to “frequently send big and small ‘gift packages’ to the Yankees”.

Pyongyang said earlier the Hwasong-14 ICBM had reached an altitude of 2,802km (1,731 miles) and flew 933km for 39 minutes before hitting a target in the sea.

North Korea, it said, was now “a full-fledged nuclear power that has been possessed of the most powerful inter-continental ballistic rocket capable of hitting any part of the world”.

What is an ICBM?

Does North Korea really have a long-range weapon now?

Some experts believe that Tuesday’s test proves that North Korea has a missile that could travel across the globe and reach Alaska.

Physicist David Wright said it could reach a maximum range of about 6,700km on a standard trajectory, while South Korea’s defence ministry on Wednesday put the range between 7,000 and 8,000km.

But whether that missile could deliver a warhead is still a question.

Pyongyang claimed the rocket carried a “heavy warhead” and that it “accurately hit the targeted waters without any structural breakdown”.

South Korea said there was no evidence proving the missile could withstand high temperatures and successfully re-enter the atmosphere, reported Yonhap news agency.

Experts believe Pyongyang does not yet have the capability to miniaturise a nuclear warhead, fit it onto a long-range missile, and ensure it is protected until delivery to the target.

But others believe that at the rate it is going, Pyongyang may overcome these challenges and develop a nuclear weapon that could strike the US within five to 10 years.

By bringing Alaska within range, the new missile test is an unambiguous game-changer in both symbolical and practical terms.

US territory (albeit separate from the contiguous continental US) is now finally within Pyongyang’s cross-hairs.

For the first time a US president has to accept that the North poses a “real and present” danger not merely to north-east Asia and America’s key allies – but to the US proper.

President Trump’s weakness lies in having overplayed his hand too publicly and too loudly.