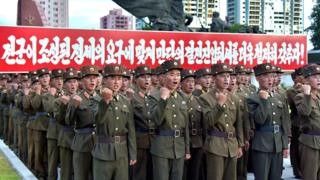 North Korean leader Kim Jong-un has been briefed on a plan to fire missiles towards the US Pacific territory of Guam, state media says.

But the report said he would watch US actions before making a decision on “the enveloping fire at Guam”.

Last week, the North said a plan was being drawn up to fire four missiles into the sea off Guam, where US bombers are based.

It came amid a sharp rise in rhetoric between the US and North Korea.

The report on state news agency KCNA said Kim Jong-un “examined the plan for a long time” and discussed it with senior military officials.

The commander of North Korea’s strategic force was waiting for orders “after rounding off the preparations for the enveloping fire at Guam”, the report added.

It quoted Kim Jong-un as saying: “The United States, which was the first to bring numerous strategic nuclear equipment near us, should first make the right decision and show through actions if they wish to ease tensions on the Korean peninsula and prevent a dangerous military clash.”

He ordered the army to be ready to launch the missiles if he made a decision for action, the report added.

Earlier, US Defence Secretary James Mattis warned that any attack by North Korea could quickly escalate into war. He said the US military would defend the country “from any attack, at any time and from any quarter”.

South Korea, which has been alarmed by the growing tensions in the region, has urged the US to seek a diplomatic solution to the crisis.

He urged the North to “stop all provocations and hostile rhetoric”.

Last week, US President Donald Trump threatened North Korea with “fire and fury” if it continued to threaten the US and its allies, and later boasted that the US nuclear arsenal was “more powerful than ever before”.

The UN recently approved fresh economic sanctions against North Korea in an attempt to pressure it into giving up its nuclear ambitions.

The measures aim to reduce North Korea’s export revenues by a third.

Pyongyang reacted furiously to the new sanctions, calling them a “violent violation of our sovereignty” and warning that the US would “pay a price”.

The North, which has tested nuclear devices five times, launched two intercontinental ballistic missiles (ICBMs) in July, claiming it now had the ability to hit the mainland US.

It is also reported to have achieved its goal of making a nuclear warhead small enough to fit inside its missiles.

Although not confirmed, this was seen as one of the last obstacles to North Korea being a fully nuclear-armed state.