No water, no school: How water delivery issues disrupt learning for Inuit children in Nunavik 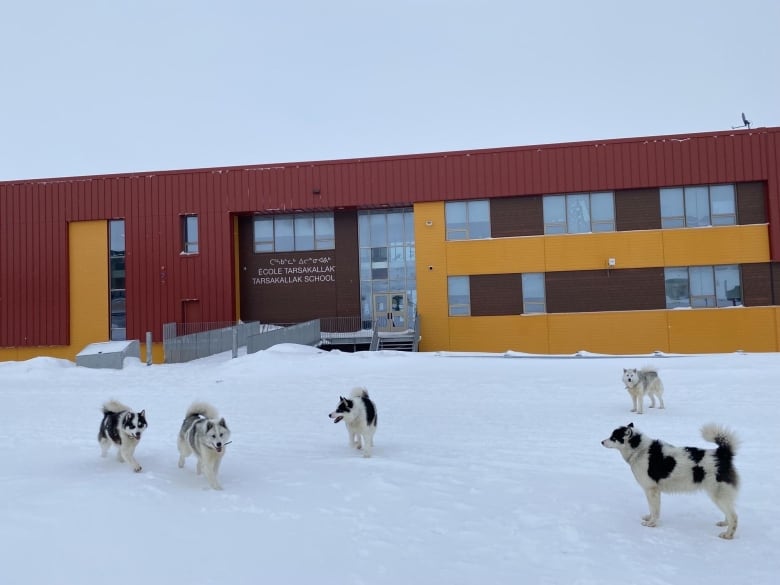 Once every week or two, Elom Akpo runs out of the principal’s office at Tarsakallak School in Aupaluk, Que., jumps into the school truck and cruises the streets of the village, looking for a water delivery truck.

This wasn’t part of the job description when Akpo took up his duties as principal last January, but it’s what he does to keep the only school in the village of 233 open. Tarsakallak School routinely runs out of water. If its reservoirs are not filled before they run dry, Akpo has to send all 60 or so students home.

The tanker drivers “are very generous and very understanding,” Akpo said in a phone interview from the village, located on the western shore of the Ungava Bay. “As soon as I mention the school, they immediately change direction and come to help us.”

Until recently, Akpo had managed to avoid school closures under his watch in Aupaluk, the smallest of the 14 communities in Nunavik, the Inuit territory of northern Quebec.

Because finding qualified drivers is also a challenge in the hamlet, Akpo, who arrived in Canada from Togo about a decade ago, even offered to be trained and occasionally drive the tanker himself — an offer he said the municipality is considering.

But two weeks ago, Akpo had no choice but to shut down the school on a Friday afternoon.

“The truck broke down,” he said. “That’s another problem we often have here.”

The school had to close again last Thursday, Akpo said in an email.

And when water runs out in a school — or when sewage tanks, which also must be emptied regularly, are full — the school must be shut down.

“In some communities, this is a very big problem,” said Sarah Aloupa, president of Kativik Ilisarniliriniq, the regional school board, in a phone interview.

“When we try to demand [an improved water and sewage system], the government doesn’t understand why schools need them,” she said. “These seem to be little things to the government but they are very essential services in order to live normally daily.”

Kativik board’s executive director, Harriet Keleutak, conservatively estimates that water shortages have led to 56 lost teaching periods of 45 minutes, for a total of eight days of school since the start of the 2021-2022 school year.

“These figures would be higher if almost half of our institutions had not had to close due to COVID-19” from October to January, she said in an emailed statement. “There may have been additional cases of school closures that have not been entered into our data management system.”

At least four schools in four different Nunavik communities have had to close recently due to lack of water.

“When the water runs out, we announce to everyone that we have two periods left before closing the school,” said Thomassie Mangiok, who takes care of Nuvviti school’s installations, in a phone interview.

When winter was at its fiercest in Ivukijk, Quebec’s northernmost community, they had to close the school often, costing students at least one period two to three times a week, Mangiok said.

Ivujivik’s water treatment plant has been out of service for more than a year. A tanker goes back and forth between the village of 412 and a nearby lake, but it can’t keep up with demand. Weather conditions and mechanical breakdowns make the situation worse.

“We’re never too sure of what is going to break,” said Mangiok, sighing.

“It’s hard to know that other people in Quebec have access to water. They don’t need to worry about it,” he said. “We don’t even have access to clean water.”

“We try to keep the school open as long as possible,” said the principal of the Iguarsivik school in Puvirnituq, Hugo Couillard, in a phone interview.

”Once the restroom becomes unusable,” he said, he has no choice but to close the school.

As La Presse reported recently, the pipe connecting Puvirnituq’s pumping station to the river froze this winter. So here, too, trucks have to pump water from the river, one tank at a time, to supply the village, located on the northeastern shore of Hudson Bay.

But closures due to lack of water are not new, said Couillard, who has worked in Nunavik for nine years.

“Usually it’s not that bad. The trucks don’t have to go that far,” he said. But, “at least ten times a year we have to close. Every year.”

He is convinced that these repeated closures have a negative effect on students’ learning.

“We would need school every day, unfortunately. The academic side struggles a bit in the north.”

“All the hours that we miss, it’s deplorable.”

Just over a quarter of students in Nunavik graduate from high school, according to Ministry of Education data cited in a 2018 report by the Québec Ombudsman on the quality of education services in the region. That compares to more than three-quarters of students in Quebec overall.

“Students have missed a lot of school because of COVID,” said Elom Akpo, who worked for two years at Pigiurvik School in Salluit, also plagued by water issues, before arriving in Aupaluk in January. “So closing again due to water is getting at me personally. I feel really bad for the students.”

No solution in sight

Quebec’s Ministry of Education declined requests for an interview with Minister Jean-François Roberge. In response to written questions from CBC News, the ministry said it was “aware of the situation” and acknowledged that water shortages causing school closures are a “factor that can have an impact on student absenteeism.”

The Ministry of Education did not, however, provide a plan to remedy the situation. Instead, it said water infrastructures are the responsibility of the Ministry of Municipal Affairs and Housing. That ministry, in turn, said it has made $120 million available to the Kativik Regional Government (KRG), which takes care of municipal services in Nunavik.

This financial assistance program should enable the KRG and northern villages to “implement their municipal infrastructure projects,” such as improvements to pumping and water-treatment plants and water-tank trucks, the MMAH said in a recent email.

The KRG declined interview requests and did not answer written questions, directing CBC instead to the mayors of each community. “KRG is not directly dealing with the closures of the schools due to water shortages,” it said in an email.

“The Quebec government should come and see us more, because they say they are serving us,” said Aloupa, the Kativik school board president. “You cannot know well the people you serve, if you don’t communicate with them.”