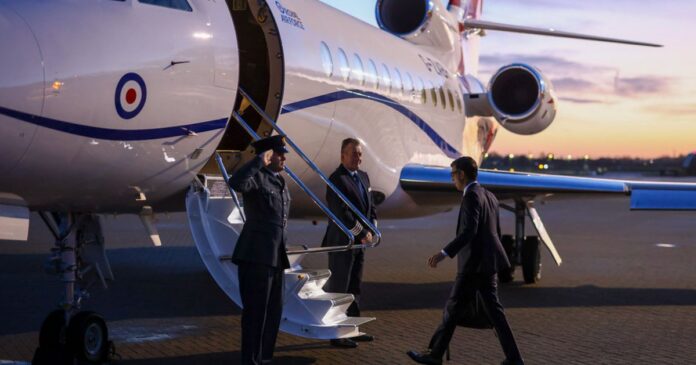 By Terry Paul
January 10, 2023
Downing Street has defended Rishi Sunak’s decision to visit a Leeds hospital on an RAF jet rather than take a train.

The prime minister is facing demands he reimburses the Treasury for the cost of the “out of touch” trip.

A photograph posted to the No.10 Flikr account shows Sunak boarding the plane.

Defending the move, the PM’s spokesperson said there was “a great deal of pressure” on the prime minister’s time.

“The transport the prime minister takes will vary and always be done in the interest of what’s most effective,” they said.

Rishi Sunak never ceases to underline just how out of touch he is,” she said.

“After this own goal, Rishi Sunak may find himself photoshopped out by his own business secretary.

“Rishi Sunak owes the public an apology and should consider reimbursing the Treasury for this waste of taxpayers’ money.”

On Tuesday Grant Shapps, the business secretary was caught having posted a photograph of himself having edited Boris Johnson out of the picture.

Sunak’s visit to Leeds came amid warnings of a crisis in the NHS and strikes by nurses and ambulance workers.

Talks between unions and ministers broke down without a resolution yesterday.

Steve Barclay, the health secretary, has suggested NHS workers could see their pay rise for next year brought forward by three months, in an effort to solve the dispute.