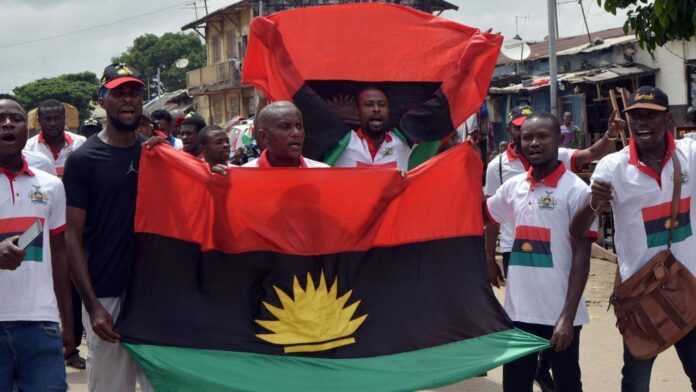 The Indigenous People of Biafra, IPOB, has disclosed that its leader, Nnamdi Kanu’s prophecy of oil discovery in the northern part of Nigeria has been actualized.

IPOB said the Nigerian government should sanction the actualization of Biafra with the discovery of oil in the North.

During the week, Buhari had flagged off the commercial production of crude oil and gas from the $3bn Kolmani Integrated Development Project.

Located along the fields of Gombe and Bauchi, the Kolmani project, with Oil Prospecting Licence 809 and 810, lies in the Gongola Basin of the Upper Benue Trough, straddling the two northern states.

Reacting to the development, IPOB spokesman, Emma Powerful, claimed that revenue from the oil field would be used to propagate jihadist agenda.

A statement by Powerful reads: “We the global movement and family of the Indigenous People of Biafra (IPOB) under the command and leadership of our great leader and prophet Mazi Nnamdi KANU confirm the answer to the prayers of our leader concerning oil discovery in the North. In one of his landmark broadcasts on Radio Biafra, he prayed for God Almighty Chukwu Okike Abiama to give crude oil to the Northern Region of Nigeria.

“Northern Nigeria has large deposits of many solid minerals that are more lucrative than crude oil. But because they thirst for oil, and because of their greedy nature to conquer others, they are ready to do unimaginable things because of oil in Biafraland. In his infinite wisdom, God Almighty Eze Chukwu Okike has settled the fraudulent contraption’s age-long problem of unity occasioned by crude oil.

“Crude oil discovery in the North will certainly settle this forced unity if indeed, they are truthful in settling Nigeria’s problem. Oil or no oil, Biafrans are not interested. All we need is a conducive environment to do our business without fear of terrorists at our borders.”

Speaking further, he said: “Now that every component part of Nigeria has oil, can we all go our separate ways and mind our own businesses?”