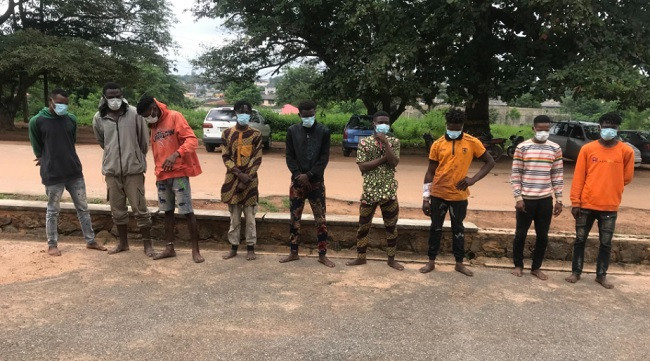 The State Commissioner of Police, Ngozi Onadeko, who paraded the suspects at the police headquarters at Eleyele, Ibadan on Wednesday, August 18, said they were arrested after the Divisional Police Officer in charge of Atiba Division got information that some cultists were gathering to do handing-over and initiation of some new members.

It was gathered that the cultists, in a large number, had moved to a forest at Oroki area of the town to do the handover ceremony when they were arrested on August 14 at almost 12 midnight, while others were nabbed at a place in the early hours of August 15 after a raid.

Recovered from the suspects were two locally-made guns, a machete, and two axes, among other weapons.

The police boss also said that those arrested were allegedly engaging in robbery and were being investigated. The police will continue doing our duties to make sure that Oyo State is safe and secure.

Onadeko enjoined parents and guardians to talk to their children and wards to be conscious of the unlawful act that cultism is.

“Just like those arrested now, their parents thought they were in school, but you can see what they have ended up doing,” she added.

In an interview, one of the suspects, Kehinde, who claimed to be an OND graduate from The Polytechnic, Ibadan, confessed to being an Eye cult member.

The suspect opened up that he was initiated into cultism in 2018 and was given ‘Sparrow’ as his cult’s bird name.

On how he got the locally-made gun found with him, Kehinde said that it was given to him to hold by a friend he went to meet in Oyo town for his handing and taking over the ceremony.

He said that he was arrested when Amotekun Corps that worked with the police, stormed where he was staying with other friends while his friend who owned the gun escaped.

Expressing regret at his cult membership, he said that he had realized that it was a bad association and he had nothing to gain from it.

According to the police, another suspect, Joshua, who disclosed that he was a member of Pyrates Confraternity and not an Eye cultist, explained that he was forcefully made to join the cult group in July. He also said that he just had the ax found as a Disc Jockey (DJ).

Three of the cultists were a barber, shoemaker, and assistant driver (motor boy), respectively.