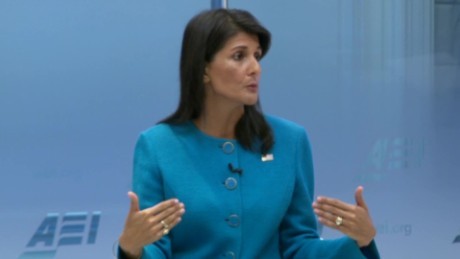 In an interview that aired Sunday with CNN’s Dana Bash on “State of the Union,” Haley emphasized that Defense Secretary James Mattis has an array of options to destroy the nation of some 25 million people.
If the US exhausts diplomatic options on North Korea, the US military would “take care of it,” Haley said,
“We wanted to be responsible and go through all diplomatic means to get their attention first,” Haley said. “If that doesn’t work, General Mattis will take care of it.”
Haley warned a war would mean the destruction of North Korea.
“If North Korea keeps on with this reckless behavior, if the United States has to defend itself or defend its allies in any way, North Korea will be destroyed,” Haley said. “And we all know that, and none of us want that.”
The United Nations Security Council adopted a new round of sanctions on North Korea last Monday in response to the nation’s sixth and largest nuclear weapons test.
Trump called the move “another very small step,” but Haley talked up the significance of the agreement and went on to say it was near the limit of what the US could accomplish through the UN.
“We have pretty much exhausted all the things that we could do at the Security Council at this point,” she said.
In an interview on CBS’s “Face the Nation,” Secretary of State Rex Tillerson emphasized that point.
“If our diplomatic efforts fail though, our military option will be the only one left,” he said.
Still, Tillerson underscored the desire of the US to avoid that possibility and to have China and Russia act forcefully to that end.
“To be clear, we seek a peaceful solution to this,” Tillerson said.
For his part, Trump tweeted Sunday morning that he spoke with South Korean President Moon Jae-in, and in the tweet referred to North Korean leader Kim Jong Un as “Rocket Man.”

I spoke with President Moon of South Korea last night. Asked him how Rocket Man is doing. Long gas lines forming in North Korea. Too bad!

Twitter Ads info and privacy
Asked about the President’s tweet on ABC’s “This Week,” national security adviser H.R. McMaster said, “This is where the rockets and missiles are coming from, is North Korea.”
McMaster repeated that the US demands North Korea give up its nuclear weapons and that “all options” remain on the table.

Turning to the nuclear agreement with Iran, McMaster expressed Trump’s displeasure with the deal and stressed the importance of verifying Iran’s compliance.
“What we have to make sure is that no deal can provide cover for the Iranian regime to develop a nuclear weapon in a clandestine manner while they’re reaping all the benefits of this deal,” McMaster said.
Tillerson said on CBS that he believed Iran was in “technical compliance” with the agreement, but that Iran’s other behavior throughout the region was against the expectation that “by dealing with this nuclear threat we would lower the tension between Iran and the rest of the world.”
Trump complained about the Iran deal Thursday, calling it “one of the worst deals I’ve ever seen, certainly at a minimum the spirit of the deal is just atrociously kept,” in remarks to reporters aboard Air Force One.
The US is “not going to stand for what they (Iran) are doing,” the President said, arguing Iran has “violated so many different elements” of the deal.

On Friday, Trump responded to a terrorist attack on the London Underground by taking to Twitter, quickly saying the perpetrators were “in the sights of Scotland Yard” and prescribing an expansion of his travel ban as well as moves aimed at shutting down terrorist recruitment on the internet.

Another attack in London by a loser terrorist.These are sick and demented people who were in the sights of Scotland Yard. Must be proactive!

The travel ban into the United States should be far larger, tougher and more specific-but stupidly, that would not be politically correct!

Twitter Ads info and privacy
UK Prime Minister Theresa May responded to the comments in an interview on ABC’s “This Week.”
“I don’t think it’s helpful for anyone to speculate on what is an ongoing investigation,” May said.
In her interview on CNN, Haley said Trump would not want to harm an investigation but was “emotional and passionate” about what happened in the UK.
“There was no ill intent with that,” Haley said. “I think it was the fact that he was just very concerned and very disturbed that these terrorist attacks keep happening in Great Britain.”
Share
Facebook
Twitter
WhatsApp
Pinterest
Linkedin
ReddIt
Email
Print
Tumblr
Telegram
Mix
VK
Digg
LINE
Viber
Naver
Previous articleLondon terror attack latest: Second man arrested in tube bombing
Next articleUS School Violence Fast Facts