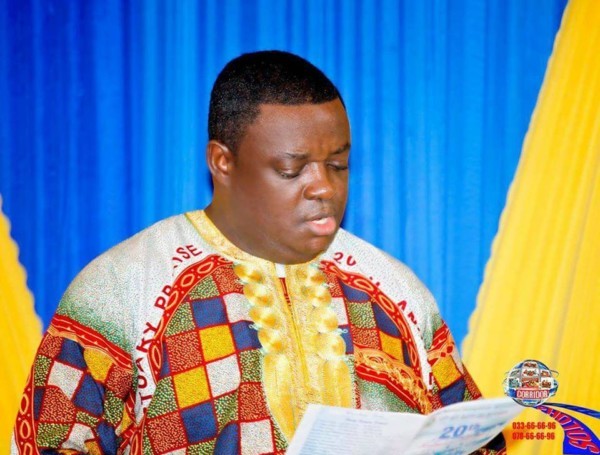 A Sierra Leone-based Nigerian pastor Victor Ajisafe has been arrested by authorities after recordings of a sermon targeting Muslims went viral on social media.

Ajisafe, who is the founder and President of the Sanctuary Praise Church had said Islam is a “violent religion of lies and deceit” adding that Muslims have been responsible for every terrorist act in the world.

Ajisafe who was speaking to his congregation last weekend, was reacting to an alleged claim made by a prominent Islamic scholar and Grand Mufti of Zimbabwe, Mufti Ismail Menk over alleged claims that Sierra Leone is an Islamic state.

Sierraloaded reports that Menk was in Freetown on a two-day visit between September 21 & 23 on the invitation of the Foundation of Islamic Information Sierra Leone (FOISIL).

Menk spoke at a stadium last week Friday and at the Freetown Central Mosque in Rokupa. Menk also visited President Ernest Bai Koroma telling him that part of the reasons why he has visited the country was to sympathize with the victims of the August 14th mudslide.

Ajisafe described Menk as a “wolf in sheep’s cotton. An angel of darkness showing himself as an angel of light to deceive and to lure people into lies.”

His sermon sparked widespread outrage from Christians and Muslims and members of the country’s inter religious council have also condemned the speech.

Ajisafe was arrested last Tuesday, according to Guardian, and all six branches of his church has been closed indefinitely.

MB Kamara, head of Sierra Leone’s criminal investigations department said: “Everyone is very upset by his message. We are a very religiously tolerant country and no one ever worries whether someone is Muslim or Christian. We all have lived peacefully for generations, and no one wants that disrupted.”

Read a transcript of parts of what he said below:

Darkness can only thrive where light has been kept under a bush hell. Oh Yes! Islam can only spread where Christians don’t preach because where we preach the difference is very clear. We are the ones that stand and preach and the one we are preaching about comes and approves and testify that what we have said is true by taking problems away from people and healing the sick and making the blind to see and make the cripple walking. We are the only the one that preach about Jesus and that Jesus will show up and confirm that what we are preaching is true. But when we keep quiet then lies, lies, lies…

Can you imagine the man called Mufti who came to Sierra Leone because they see us that we look vulnerable, we are poor, we can easily be deceived. He could stand in the national stadium of this country and telling this nation that this nation is an Islamic state. What an affront. There is nothing like Islam in the history of Sierra Leone. You have idol worshiping and Christianity, those are the two religions here. Besides, is that what the constitution says? He lied. He told a lie. I’m expecting church leaders to call a press conference to dispute that because of the naive people, people who don’t know.

He came and trying to project Islam as a religion of peace, who is He deceiving? The symbol of Islam is a religion of sword. Go and kill. Every terrorism in the world has been carried out by a Muslim. Every terrorist act, there is no Buddha there. Anywhere you hear of terrorism it is Islam. And yet he can to convince us and lie to us. We know that one of the secrets of Islam is deception. He should go and deceive them in other worlds. He is a wool in sheep’s cotton. What he is saying and what he believes are different. “If anybody doesn’t believe in Jesus, he is not a true Muslim” Lie… Lie.

He’s a Wolf in sheep’s cotton with a mission to deceive, to carry men to hell. Jesus Christ is the light of the world. I know why he claimed that Sierra Leone is an Islamic state. Because the ex late President of Sierra Leone, Alhaji Ahmed Tijan Kabbah, through a back door, through black market, took Sierra Leone to Islam by joining this nation to OIC because of money. He did that. It’s not in the constitution.