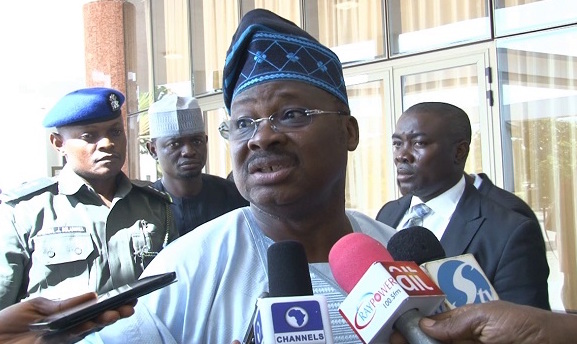 The Oyo State Governor and candidate of the All Progressives Congress (APC) in Oyo South Senatorial District in last Saturday’s presidential and National Assembly elections, Senator Abiola Ajimobi, has expressed appreciation to the people of the state for their peaceful conduct and large turnout during the elections.

The Peoples Democratic Party (PDP) candidate for Oyo South Senatorial District, Dr. Muhammed Kola Balogun had axed the plan of Ajimobi to return to the Senate.

Balogun defeated Ajimobi who contested under the platform of the ruling All Progressives Congress (APC) in the National Assembly election held on Saturday.

A statement by the Special Adviser to the Governor on Communication and Strategy, Mr Bolaji Tunji, quoted Ajimobi as saying that the people of the state have shown their love for the APC by voting massively for President Muhammadu Buhari and the APC candidates in the elections.

The governor equally congratulated the APC and its candidates in the state, who picked nine out of the available 14 Federal Constituency seats and two out of the three Senatorial seats.

Ajimobi said, “We appreciate our people for coming out last Saturday, which led to APC winning two, out of the three Senatorial and nine out of the 14 Federal Constituency, seats in the state.

“The victory has shown the unassailable leadership of the APC in Oyo State. It has also shown that our people are appreciative of the developmental strides of the APC in the state and the country at large.

“We have taken Oyo State to an unprecedented level in terms of massive infrastructural renewal. Most importantly, we have ensured peace in the state.”

The governor described the loss of the Oyo South senatorial seat as unfortunate, but noted that no sacrifice was too much for a leader to make.

He enjoined all APC members to gird their loins for the March 9 governorship election, stressing that battle was not over yet.

Ajimobi emphasised that the loss of Oyo South senatorial seat would not deter him from his firm resolve and that of the APC to work hard for the party’s victory in the governorship election.

The governor said, “The results of the Oyo South Senatorial District election have been released by INEC (Independent National Electoral Commission) indicating that I lost to the PDP (Peoples Democratic Party) candidate.

“I hereby accept the result as announced. Although there were a number of grievous infractions and established electoral malpractices, I have decided to let go in the interest of peace. I, therefore, congratulate the declared winner, Hon Kola Balogun and our APC Senators-elect, Abdulfatai Buhari and Teslim Folarin.

“If I lose the ticket and the party was able to gain, then it is nothing to feel sad about. APC has done well but we can always do better. If we won two out of the three Senatorial seats and we picked nine out of 14 federal constituency seats, then we should congratulate ourselves.

“To the teeming members and supporters of our party who came out in their thousands to show their preference for the APC, I thank and urge you to keep the faith especially as we look forward to the governorship and the House of Assembly elections.

“With the impressive results we currently have, we should proudly go forth with greater sense of confidence and unity of purpose. Let us work together to ensure victory for our governorship candidate, Chief Adebayo Adelabu, and all our candidates for the House of Assembly.”