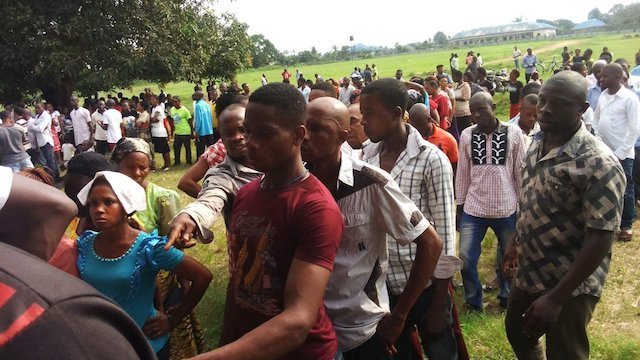 The presidential and National Assembly elections have ended in Enugu State peacefully.

Counting has gone far in almost all the polling booths in the State.

DAILY POST correspondent, who observed the exercise across the State reports that but for late arrival of election materials in some areas and malfunctioning of the card reader machines, the exercise went without hitch in most places.

The election commenced in most parts of the State between 8.30 and 10 a.m, with adequate security provided by both the military, the police and other paramilitary organizations.

No incident of ballot box snatching was recorded in the State as of the time of filing this report.

In Enugu North Senatorial Zone, where Governor Ifeanyi Ugwuanyi hails from, he cast his vote at about 10 a.m, thanking God for the prevailing peace in the State.

In all the polling units visited in the area, the exercise was going on smoothly.

Asadu, who spoke with journalists after voting, hailed the Independent National Electoral Commission, INEC, for improving on the process carried out in 2015.

“I think it is a major improvement on the 2015 experience; you can see the number of people in this polling unit, so democracy is alive and well in Enugu State. Like our Governor will always say, Enugu is in the hands of God, that’s why we have not had any incident.

“The turn out is impressive and we are very optimistic that we will have success. No matter the outcome, we must thank God for everything. I must thank the press for always protecting our democracy,” he said.

Similarly, the candidate of the All Progressives Congress, APC, for the same constituency, Engr. Ike Ugwuegede hailed the INEC over the smooth conduct of the exercise.

Ugwuegede told journalists that “the exercise has been peaceful; the voting process has been smooth; the turnout has been encouraging.”

He, however, said there was delayed arrival of voting materials in some areas, stressing “we may not ascribe these few lapses to sabotage but errors in one way or the other. We try to report to the INEC so that these issues be sorted out. By and large, I will say it may not be a perfect system, but there is a fair attempt to deliver a credible election.”

DAILY POST correspondent who was at Enugu East Senatorial zone also reports that voting ended in record time, with counting concluded in almost all the polling units.

Speaking on the exercise, a former Governor of Enugu State and senatorial candidate of the PDP in the zone, Senator Dr. Chimaroke Nnamani, said the exercise was laudable.

Nnamani, who is already coasting home to victory going by results already declared at some of the polling units in the zone said “We are grateful to God that again we are going through this four years of clear participation of democratic process to pick who will oversee over the affairs of our people.

“We have had a smooth free and fair election. Even though one would have expected larger turnout but I believe maybe the postponement dampened the enthusiasm of our people.

“But democracy is alive and working.”

Asked to rate the INEC, he said. “it is not about rating, the poll is successful. INEC so far has conducted a successful election. Apart from the postponement, which was highly regrettable, because we are talking about 2019.

“Nigeria is one of the global economy, when you talk about Africa or Nigeria, you are not talking about place far away, we are part of the global community in this digital age, we cannot really explain to our children how we have four years to organize something and you need one more week, if you have four years to organize something, if you need time, it is not one week, you need about four months or six months, but so far, I can say INEC delivered.”

The former governor polled 245 votes in his Ojiagu polling unit, while APC got one vote.