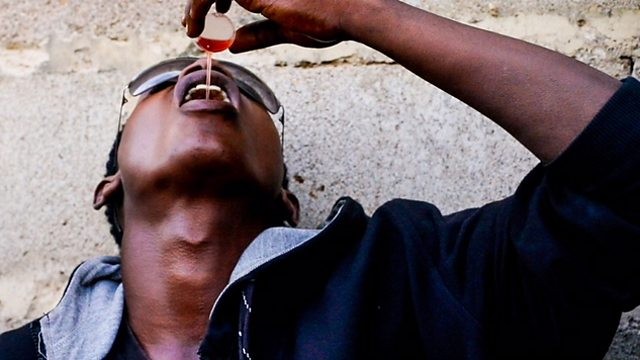 Nigeria has announced a ban on the production and import of cough syrup containing codeine after a BBC investigation into its role in an addiction epidemic.

A health ministry spokesman told the BBC remaining stocks in shops could be sold with a prescription.

The BBC investigation showed the syrup being sold on the black market to be used by young Nigerians to get high.

It recorded a number of pharmaceutical figures selling the drug illegally.

The joint probe by the BBC’s new investigation unit, Africa Eye, and BBC Pidgin prompted a swift response from people across the country, including Nigeria’s first lady, Aisha Buhari, who said in an Instagram post she was “deeply saddened” by the rise of the problem, especially in the north of Nigeria.

“I call on all security agencies, lawmakers, judiciary, drug manufacturers, civil society, regulators, teachers, parents, neighbours and you to take this as a personal war and halt the menace,” she added.

However, Olajide Oshundun, the Ministry of Health’s assistant director of information, said the ban was a result of months of work by a committee, which submitted a report into the widespread abuse of the medication on Tuesday.

While existing stocks could be sold, manufacturers in Nigeria “have been told by federal government not to use codeine in cough syrup”, Mr Oshundun told the BBC.

“Those that want to import the substance, it is been banned now. It is completely banned,” he added.

The cough syrup was legal, but it was against the law to sell it to people without a doctor’s prescription or those who did not have a pharmaceutical licence.

The Nigerian Senate estimates that as many as three million bottles of codeine syrup are drunk every single day in just two states, Kano and Jigawa.

The BBC’s undercover team caught one executive for Emzor Pharmaceuticals boasting he could sell “one million cartons” in a week on the black market.

But Emzor told the BBC its representative only had access to a very limited amount of its brand of syrup, Emzolyn with codeine, and could not sell large quantities illegally.

Emzor released a statement on Facebook emphasising its commitment to the proper “handling, production, storing and distribution of products containing codeine”.

It has suspended all distribution pending a “full and thorough investigation” and has fired the employee involved.

“We hope the findings of the documentary will shed further light on the extent and impact of the illicit trade and consumption of codeine,” the statement said. “We hope that full stakeholder engagement will result in impactful action against the abuse, smuggling and faking of drugs on the continent.”

Codeine cough syrup – the scale of the problem