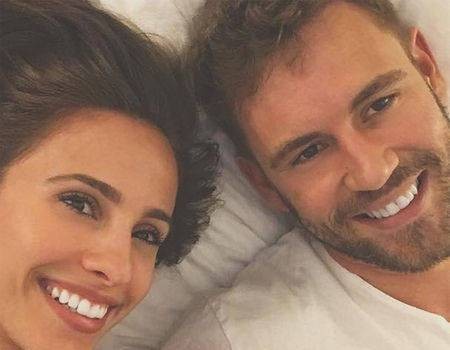 Nick Viall has returned to fiancé Vanessa Grimaldi‘s hometown of Montreal to spend some time with her family, marking his first trip back since the two traveled there on The Bachelor.

Viall had proposed to Grimaldi on the season 21 finale, which aired in March. She traveled to Montreal earlier this week by herself. Grimaldi posted on her Instagram page Saturday a selfie of her and Viall lying on a bed, writing, “Reunited with my Americano #saturday #mtl.” She also posted on Instagram Stories a video of him at an Italian bakery.

Viall posed on Instagram Stories a video of him on a plane, a photo of Grimaldi lying on top of a bed in a hotel room and a video of him driving her around. He also posted on his regular feed a photo of her sleeping in the bed.

“Really enjoying the sights of Montreal,” he wrote.

“It’s Nick’s first trip to Montreal since filming the show,” a source told E! News exclusively. “He didn’t really get to see that much during their hometown date, the visit was so short.”

The source said the two plan on spending a week in the city and then return together to Los Angeles, where he lives.

“It’s really his first chance to check out the city,” the source continued. “Also, they’re spending time with Vanessa’s family.”

“For Dancing with the Stars, she really supported him,” the source said. “Now, he’s going there to support her.”

Viall had competed on the recent 24th season of Dancing With the Stars, which ended earlier this week. He and partner Peta Murgatroyd were eliminated earlier this month on the sixth week of competition. During his time on the show, Grimaldi attended tapings, sitting in a front row.

Another source told E! News Grimaldi is planning and organizing a July fundraiser for her charity No Better You. The source added that after she and Viall fly to Los Angeles, she will return to Canada for the event and does not plan on staying in Los Angeles permanently as of now.