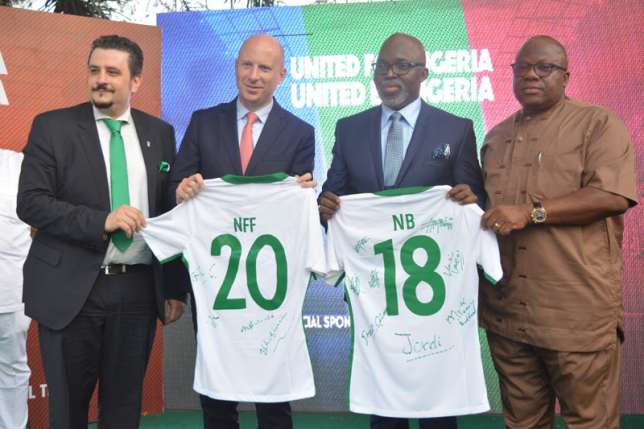 This is the highest value of partnership deal the Nigerian football body has had in recent time.

The Nigerian Football Federation and Nigerian Breweries Plc have signed a five-year partnership deal worth N2.2 billion (N450m per annum).

This deal will see two Nigerian Breweries Plc’s biggest brands, Star Lager and Amstel Malta as an official alcoholic and malt beverages of the National football teams of Nigeria.

An official deal signing ceremony to kick-off the partnership deal was held in Lagos on February 10, 2018, and the event was attended by major stakeholders in the Nigerian sports industry including ex-Super Eagles players.

Mr Amaju Pinnick, the NFF President said the deal would benefit all major stakeholders within the Nigerian Sports market.

“This strategic partnership that we are unveiling today is very significant, not only because of what the NFF and the national football teams stand to gain but also because of what is in it for the fans and supporters of Nigerian Football,” Pinnick said.

“The benefits of having Star and Amstel Malta as an official alcoholic and malt beverages of the national teams respectively will ultimately help the Federation build on its recent achievements”.

With this partnership deal, the two brands will be providing support to players and coaching crews of all national football teams. Also, the company will provide enjoyment for passionate fans to cheer the teams during and after their matches especially during 2018 World Cup in Russia.

Other companies who have recently gone into partnership with the NFF include Coca-Cola, Wapic Insurance and PayPorte.