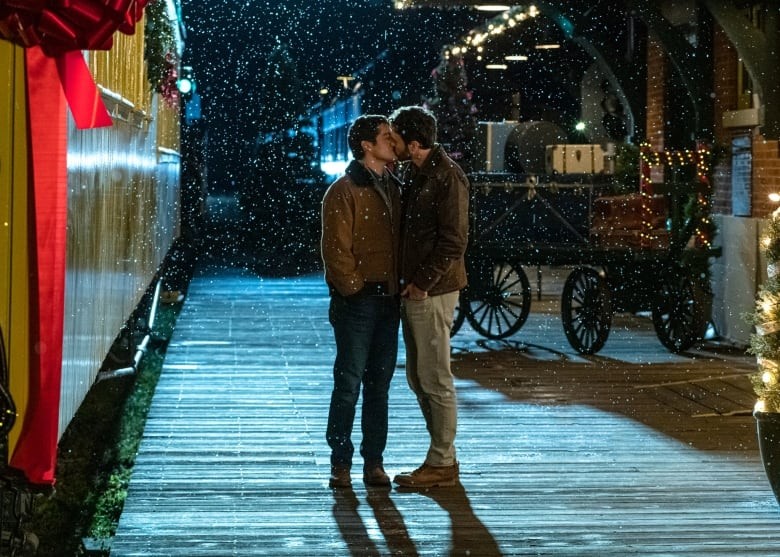 Along with the holiday season, come the holiday movies. And this year, the onslaught includes something new — an unprecedented wave of flicks focused around LGBTQ-relationships.

While the selection has some industry insiders saying ‘it’s about time,’ critics say Hollywood still has work to do toward shedding tropes often associated with queer stories.

“A lot of the time in these [holiday-themed] movies, gay characters are side characters,” McAndrews said.

“As you realize your sexuality growing up and you think, ‘Am I bisexual? Am I gay? Am I a lesbian? I don’t see myself represented’… it makes you feel sad that you don’t see yourself.”

But 2020 has brought radical change. U.S.-based holiday flicks such as Dashing in December, The Christmas House and I Hate New Years all cast gay couples in the lead roles.

Canadians have been getting in on the action as well: Schitt’s Creek star Dan Levy plays a supporting role in Hulu’s recent Happiest Season, while Lifetime’s first ever LGBTQ holiday film — The Christmas Setup, which has its Canadian premiere today at 8 p.m. ET on CTV Drama  — stars Toronto-born Ben Lewis alongside his real-life husband, Blake Lee.

That role, Lewis said, represents a significant cultural shift, one that was highlighted as he was tested for COVID-19 prior to arriving in Ottawa for filming. An older gay man who tested both Lewis and Lee said he was astounded by the progress made in his lifetime, Lewis said.

“He was very emotional, as he’s like swabbing our noses, telling us how much the representation means to him, how it’s something he never thought he would see,” Lewis said. “And so that was a very early indication … of the greater cultural significance of of doing the movie.”

WATCH | Why there’s a new wave of LGBTQ holiday movies this year: 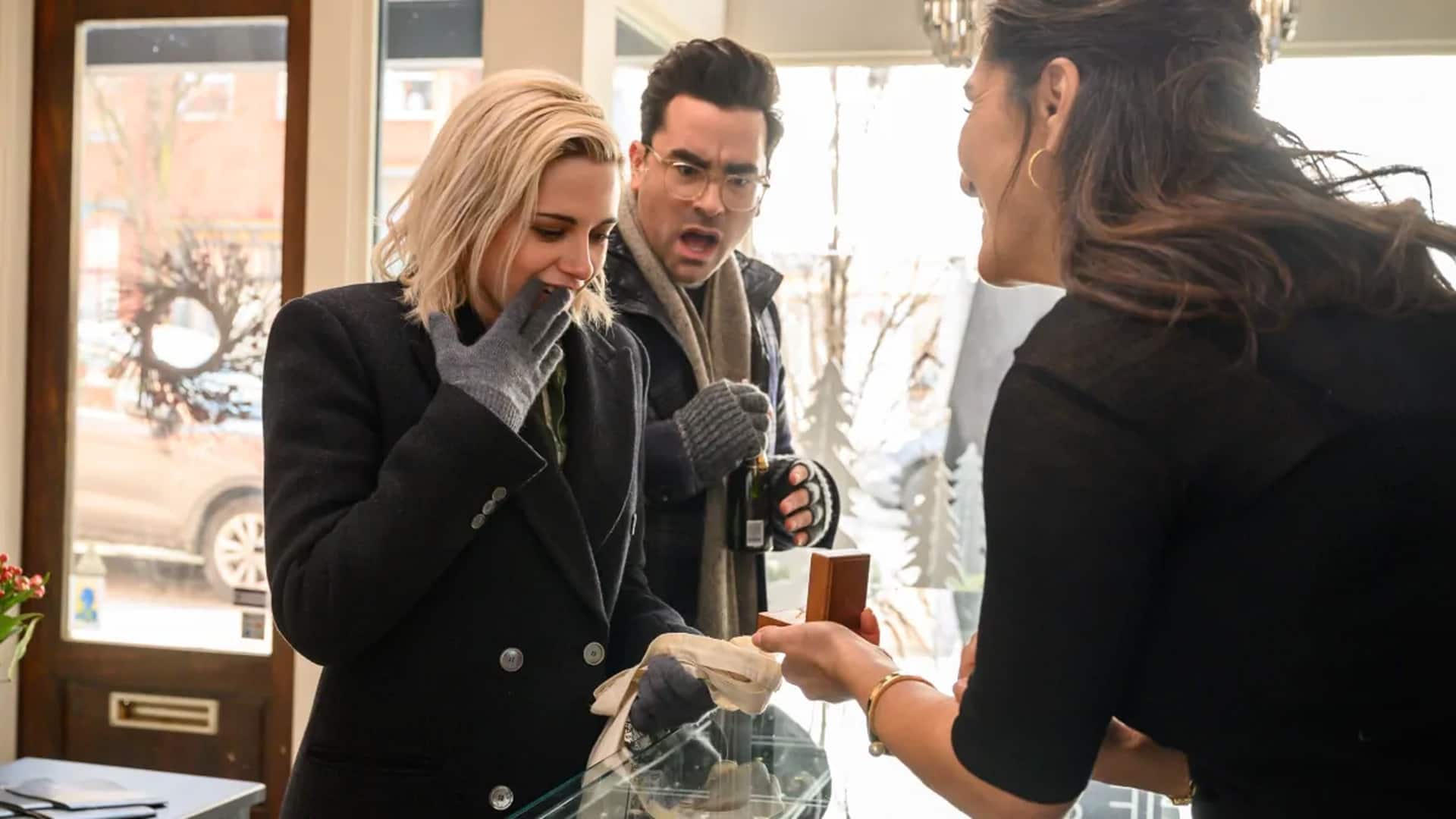 Happiest Season and The Christmas House are among the holiday movies released this year showcasing same-sex relationships. 6:48

Meanwhile, lighthearted movies — like Christmas and holiday-themed ones — have been left out, “because those aren’t technically considered as important,” she said.

“But like I said, gay people deserve joy,” McAndrews said. “Gay people are funny, like we’re all hilarious and deserve to have a little bit of joy and a little bit of cheese. Yeah, why not?”

Christin Baker has noticed that trend for years. As the director of 2019’s LGBTQ romantic comedy Season of Love, she said hers was one of few movies that focused on joyous side of queer stories.

“We were the only one last year that had leading characters that were LGBT,” she said. “If you saw the list of holiday movies that were out, [gay people] were all side characters or part of a larger ensemble.”

After the release of that movie, she said she got a deluge of messages from fans on social media. They thanked her for making a film that represented them — which they could watch with their parents or children — that wasn’t primarily about hardship.

Up until now, Baker said, the vast majority of films featuring that representation — like Moonlight, Green Book, or Call Me By Your Name — focused on pain. While those movies are important, she said, painful stories are not the only ones that should be told. And around the holiday season, movies about rejection and sadness aren’t what most people are looking for.

“They’re coming out stories. They’re unrequited love. They’re ‘I can’t be with you because society tells me that,’ or ‘I’m coming out, but my Mormon parents are going to hate me,'” Baker said of existing LGBTQ films.

“I think the community is finally sort of going, ‘Wait a minute, we appreciate sad stories… [but] we would like a few more happy ones now.'”

Baker’s next film, I Hate New Years, is among the wave of LGBTQ-focused movies this year.

But while they are welcome by many, they haven’t escaped criticism.

Happiest Season — the 2020 Christmas rom-com starring Kristen Stewart, Aubrey Plaza and Dan Levy — has borne the brunt of these critiques. Despite strong reviews and popularity — in its opening week it had the highest viewership of any original movie on Hulu, according to Variety —  its storyline has incited debate.

The film follows Abby (Stewart) as she visits her girlfriend’s family during the holidays. Abby plans to propose to her girlfriend, Harper (Mackenzie Davis), only to discover Harper hasn’t yet come out to her conservative parents.

To USA Today entertainment reporter David Oliver, it was more of the same: one of the most anticipated holiday movies of the season defaulting to tropes all too common in LGBTQ media.

“I did not want to watch another coming out story and toxic relationship on screen,” Oliver said. “I kind of felt like I’ve seen enough of that — I’ve lived enough of that.”

The film, he argued, could have explored what a healthy gay relationship looks like, with a romance story about two people that already accepted themselves. By focusing on a coming out story — that is not even resolved in a healthy way —  it instead only adds to the pile focusing on gay trauma.

Even outside of Happiest Season, Oliver said, there is farther to go. While there is more gay representation in films, there are still few transgender people in leading roles.

And despite the greater number of holiday movies, representation of LGBTQ people in films and tv is still in the single digits said Sarah Kate Ellis, CEO of LGBTQ activist organization, GLAAD.

All isn’t lost, though; Ellis said just looking at the increase in the number of such films is a positive.

“I’m beyond thrilled, honestly,” she said. “We’ve gone from relatively invisible in holiday films… to now this year, having five feature films include LGBTQ people as the main story.”

She said that while studios used to be nervous about making those stories, economics have convinced them to change. A significant percentage of young people identify as LGBTQ, she said, and creators are finally playing catchup.

“What you’re seeing is that movie studios and television stations and streaming content creators are realizing that — if they want to attract the next generation of television watchers and viewers — they really need to appeal and to include all identities,” she said.