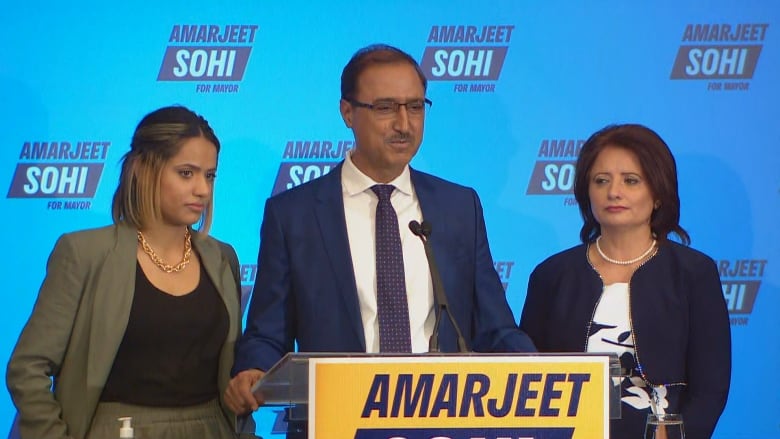 Alberta’s two major cities are set to make history in their mayoral races after Monday’s municipal elections across the province.

Jyoti Gondek is to become Calgary’s first female mayor and Edmonton voters appear to have elected the city’s first person of colour as mayor.

Gondek will replace Naheed Nenshi, who held the city’s top job for more than a decade.

“Thank you, Calgary, with all of my heart,” Gondek said late Monday during her victory speech. “Thank you for engaging in democracy and sending a clear signal about what our future looks like.

“Thank you for embracing a vision of promise and opportunity.”

Nenshi responded to the unofficial results on social media.

“History. Made,” he wrote as he congratulated Gondek on her win. He, too, made history as the first Muslim mayor of a large North American city. Earlier Monday, he thanked Calgarians for giving him the “honour of his life.”

Gondek served as a city councillor in Calgary for four years, where she championed public transit, police reform and city growth.

‘We made the impossible possible’

Her mayoral campaign has focused on issues such as investing in transportation, getting more property tax dollars from the provincial government and making Calgary a “centre for excellence” to boost social, economic and environmental recovery.

“As an 18-year-old immigrant without much to my name, I had ambitions and dreams to build a better life in a new home — dreams that sometimes seemed impossible,” Sohi said during his victory speech late Monday. “Today, because of you, because of everyone in this room, we have made the impossible possible.”

He was a city bus driver and an Edmonton city councillor before entering federal politics and serving as Minister of Natural Resources and Minister of Infrastructure and Communities under Prime Minister Justin Trudeau.

Sohi will take over from Don Iveson, who announced he wouldn’t run for re-election after serving two terms as mayor. In a statement, Iveson said Edmonton will thrive under Sohi’s leadership.

“I’ve had the pleasure of working with Mayor-elect Sohi during his time as (a) city councillor and have always appreciated and been inspired by how hard he has worked for our community,” said Iveson.

Both newly elected mayors were leading with about 45 per cent of the votes with almost all polls reporting.

The election results, which also included mayors, councillors and school board trustees across the province, will be made official Friday.

Edmonton Elections said more than 229,000 residents voted in the municipal election. In Calgary, voter turnout exceeded 382,000 people — though neither tally is finalized.

Provincial referendum questions on the federal equalization program and daylight time were also on the ballot. Elections Alberta said those results won’t be available until Oct. 26.

Voters in Calgary were asked in a plebiscite about whether to return fluoride to the city’s drinking water. Unofficial results show the majority voting in favour.