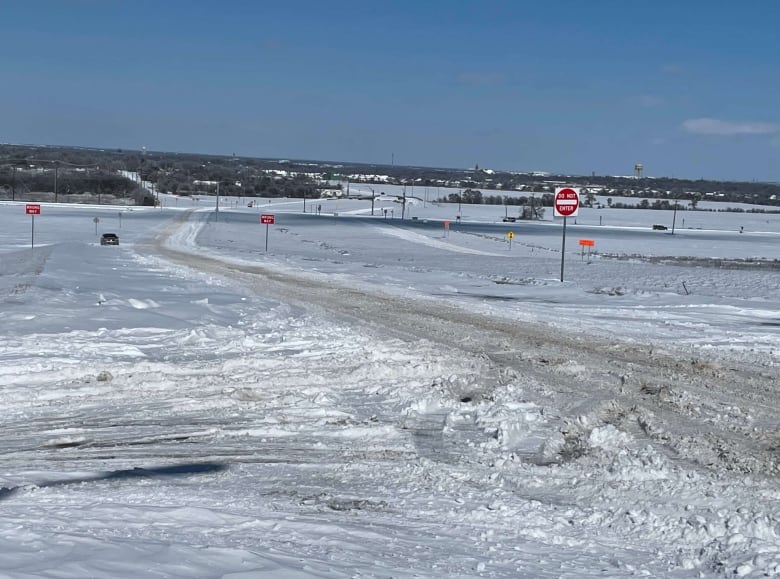 When a massive winter storm struck Texas, Karen Christensen was glad she still had her winter clothes more than two decades after leaving Canada.

“This storm I think outnumbers pretty much anything I’ve seen at home,” she said.

The Canadian expat grew up in Fredericton before later relocating to the U.S. in 1999 to work as a nurse.

While her time in New Brunswick left her better prepared than some — the impact still came as a surprise.

A rare blast of snow and ice overwhelmed the electrical grid last week, leaving several million Texans without power and heat. The cold snap plunged temperatures in some cases to as low as -20 C.

Christensen lives in Georgetown, about 30 minutes north of Austin. She went nearly five days without power at her apartment, before it returned Friday morning.

She has been without running water since Wednesday and is staying with friends.

“People don’t own shovels, so it’s been true chaos down here,” she said.

“This has literally shut down Austin and surrounding cities, I’m going to say more so than even COVID did.”

The cold temperatures have burst water lines and resulted in a shortage of clean drinking water across the Lone Star State. Officials have also issued a boil-water advisory because low pressure could have allowed bacteria into the system.

Snowfall and freezing rain swept across most of Texas for a week, bringing road traffic to a halt and closing businesses.

With no snowplows, roads have been difficult to navigate for people with little to no experience with winter driving.

People don’t own shovels, so it’s been true chaos down here.– Karen Christensen

Texans have been going outside in sneakers and sweatshirts, since most do not own winter coats or boots.

Christensen prepared for the weather by buying water, filling her bathtub and gathering supplies. But she said most of her friends and neighbours weren’t ready for days without power and sidewalks, parking lots and roads covered in sheer ice.

“There’s abandoned cars everywhere on the side of the road, transport trucks are just stuck because people ran out of gas at the gas station,” she said.

The cold snap is unexpected for Texas, where February temperatures are typically well above freezing.

“I don’t think a lot of people heeded the warning that we were given and prepared for this,” Christensen said.

She has spent three nights sleeping at the hospital between shifts, along with about 50 of her colleagues. The treacherous conditions made it too difficult to go home and return for work.

More patients have been admitted to the trauma centre in response to the storm, with hypothermia and broken bones from falling on ice.

Christensen said Saturday was the first time in about a week that most businesses in the Austin area had reopened. But the shelves of grocery stores and pharmacies are bare as food supplies remain low.

The snow-covered city reminds her of home, although the devastating impact is unlike anything she’s ever seen before. Bridges, overpasses and roads with a hill were completely blocked off to traffic

Texans have been helping each other out by handing out blankets and supplies. Some restaurants have been giving away meals.

Temperatures are warming across the state and power is being restored. But Christensen said it could be several days before she has water again at home.

“I probably weathered it better than most, just because I’ve had the experience of living in Canada,” she said. “But it’s still a whole new ballgame.”