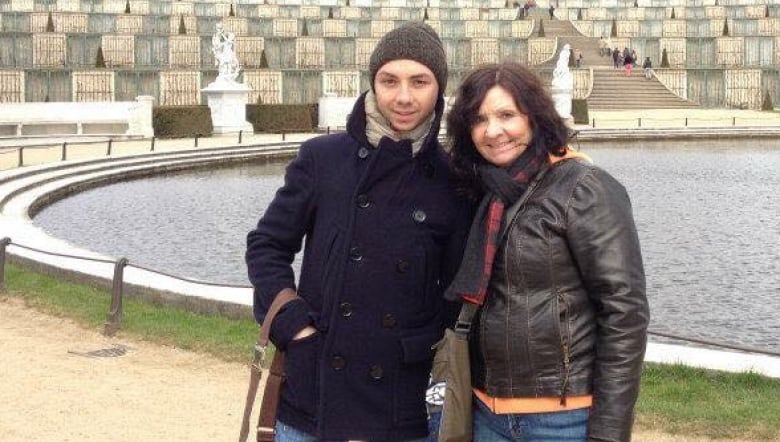 When Margaret Clark first saw pictures on Facebook of the “straight pride” flag waving in the central New Brunswick village of Chipman, she felt as if she’d been kicked in the stomach.

“It’s just like they created a time machine and they put us back 10 years,” said Clark, who lives in Minto, about 50 kilometres east of Fredericton.

A little farther east of Minto, people had raised the straight pride flag next to the Chipman Marina, in the heart of the village.

The flag has since been taken down Monday afternoon after leaving it up for almost 24 hours.

The flag of black and white horizontal lines promoting heterosexuality was raised by some conservative groups in the U.S. in response to gay pride events.

It has outraged residents in Chipman and Minto, who demanded it be taken down.

It crushes my heart because I love my son just as much as they love their kids.– Margaret Clark, Minto resident

Clark called the flag a “symbol of hatred” and said it reminded her of when her son Chad Kelly, 34, was teased at Minto High School for being gay. In high school, he was even punched in the face for being gay and came home with a black eye.

In Grade 11, the teen was bullied so much that he moved to Prince Edward Island, where he finished high school. Clark said her son came out to her about two years later.

Today, he lives in Munich, Germany, with his husband and works as a client manager at Louis Vuitton. He has never returned to Minto, near Grand Lake. 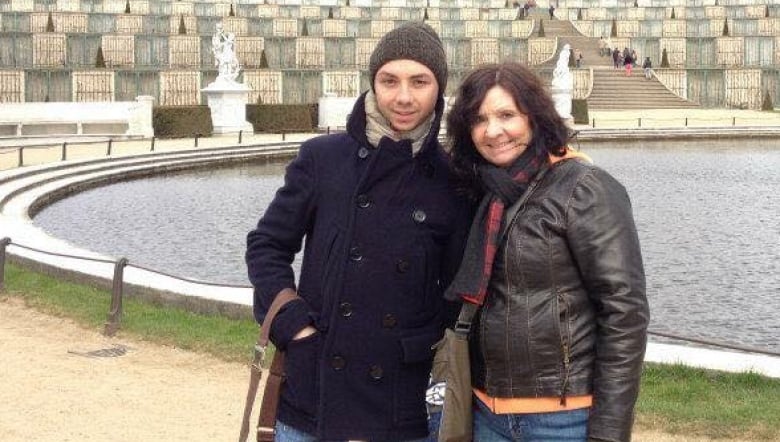 Margaret Clark with her son Chad Kelly in Germany. (Submitted)

“It crushes my heart, because I love my son just as much as they love their kids,” she said of the people who put up the flag.

Although she feels most people in the area support the LGBTQ community, Clark said there are a few who don’t.

“It represents hatred …. ‘We’re going to show them that us white, straight people are better,'” she said of the flag-raisers.

When Lyle Robichaud first heard about the flag, the former Minto resident thought someone had written a satirical article, which was rapidly being shared online.

Then he realized what he was hearing was far from satire.

“It’s disgusting, it’s sickening that the neighbour of my community has that up,” said Robichaud.

“All it says to anybody in the LGBTQ in the Grand Lake area, is you’re not welcome here.”

Robichaud says he has gay friends who work both as paramedics and in the public sector in the Grand Lake area.

“It’s a great big middle finger to them [LGBTQ community], as far as I’m concerned,” he said. “The village has effectively shot themselves in the foot.”

“I have never seen an act of hate this big in our village or in any of our neighbouring communities,” he said.

‘Not against gay pride people’

Both Minto and Chipman are in a conservative provincial riding that recently sent the leader of the third-party People’s Alliance to the legislature.

The flag’s appearance in the village was the work of Glenn Bishop and 11 others, who met over the past few months to find ways to show support for straight people.

Bishop described the flag as an international sign of man and woman.

The flag was being taken down on Monday afternoon and replaced with a Canadian flag. (Photo: Hadeel Ibrahim/CBC)

“We are not against the gay pride people at all,” he said. “I’m not against gay people; anybody’s sexual preference is their choice.”

Bishop said he went to the mayor about two months ago and asked to fly the flag.

“He said, ‘Sure we represent all groups of people,’ and I agree with that,” said Bishop.

Bishop said “the gay pride people” represent about five per cent of the population in the area, and straight people make up about 95 per cent.

According to Bishop, about 50 people attended the flag raising Sunday afternoon. Mayor Carson Atkinson was among them.

“He made a speech just implying we are an international town, we represent all groups of people, which we do,” Bishop said.

“I don’t understand. We never made no squawk when they flew their flag.”

I’m not against gay people, I have many gay friends.– Glenn Bishop, Chipman  resident

On Monday morning, the Village of Chipman shared the mayor’s speech on Facebook. The village took the post down about 30 minutes later.

“For all of us in the community, we are reminded that we must celebrate the many elements in our community which bring us together.”

CBC News has asked to speak to the mayor and is waiting for a response.

Although he has seen a lot of negative reaction on Facebook, Bishop said he expects other communities will start flying the flag.

“It’s only a small percentage of them who are not happy about it and most of them are either people who … are either gay or if they have children who are gay,” he said.

“That’s why we’re getting a little bit of negative response from this.”

The flag was set to fly until Saturday, and Bishop was hoping the flag would be raised every year.