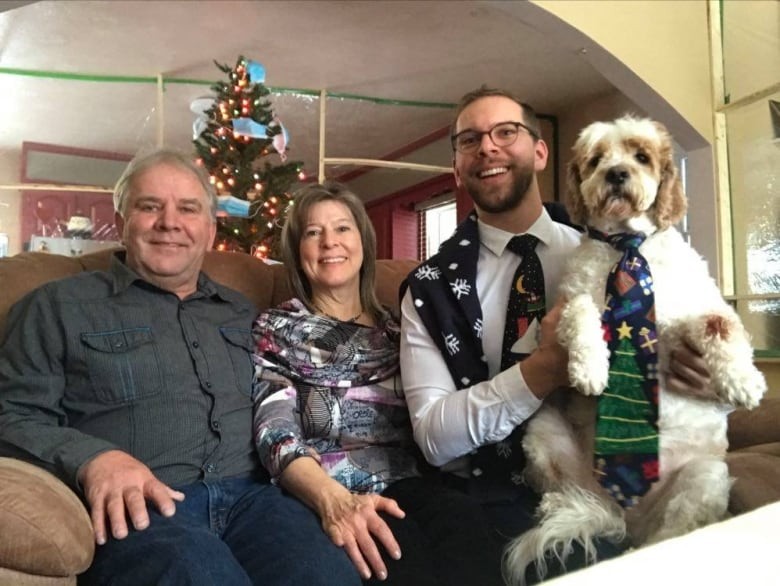 Eric Bélanger’s self-isolation was a lot less lonely than he expected.

For two weeks, he spent his time playing cards and eating meals with his parents — all while separated by a plastic bubble.

A custom-built structure kept him sealed off from his parents by sheets of plastic while still having access to the dining room and living room.

“It would have been easy for them to tell me to go to the basement for 14 days, but they decided to have this bubble, which was dividing the living room,” Eric said.

It had been about 11 months since the family was last together in person. Eric lives in Montreal while his parents live in Saint-Joseph-de-Madawaska, N.B., a small community near Edmundston.

They considered different options for Christmas, including isolating in a hotel room for two weeks or staying apart altogether.

But they didn’t want their son to be lonely.

His father, Fernand Bélanger, a self-described craftsman, came up with an idea: build a wooden frame and use plastic sheets to create a sealed-off bubble.

He called the local police and the New Brunswick COVID-19 information line to get approval, then began building the structure. The plastic sheets dividing the living and dining room kept the family protected — but able to see each other and talk.

While enjoying a meal, they would even clink glasses against the plastic sheet.

“We were able to share nice moments together and even do a toast together at supper, each on our sides of the plastic,” Eric said.

“Despite the fact that I was in isolation, I didn’t feel separated from them.”

Most travellers entering New Brunswick are required to self-isolate for 14 days.

Provincial guidelines require those in quarantine to limit contact with other members of the household by using a separate bedroom and bathroom if possible. Masks must be worn if there are times when physical distancing cannot be maintained.

Eric was well-equipped in the basement with a mini-fridge, toaster, kettle and plenty of snacks. He also had a separate bathroom and bedroom.

But his dad said it was important to be able to keep him company.

“I did that so he could see us in the living room and watch TV with us. When we ate it was the same,” said Fernand.

“It was like he was always close to us, but he had this wall to isolate him.”

The plastic bubble was completely sealed off from the rest of the house with tape on the ceiling and floor. That portion of the dining and living rooms has its own exterior door, where mom Denise Bélanger would leave Eric’s meals outside.

“We were surprised at the extent we felt together,” she said.

Eric recorded a video on his last day of isolation to share the effort his parents took to ensure isolation rules were followed. He hopes it encourages others to comply.

The two-week period came to an end on Saturday, with Fernand popping the bubble open with a knife.

Denise reached out to touch her son for the first time in months, this time without plastic between them. Now the family looks forward to spending Christmas together.

“I was happy because I was able to hug him and have him closer to me,” she said.