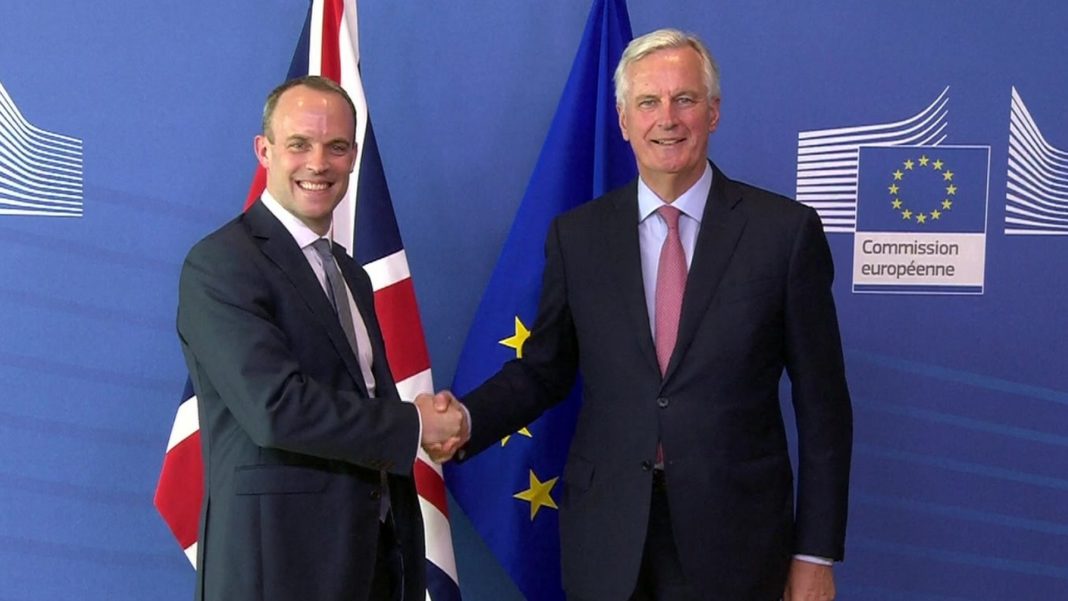 The UK’s new Brexit secretary has offered to meet Michel Barnier throughout August to “intensify” talks and “get some energy” into them.

Dominic Raab said his first meeting with the EU’s chief negotiator in Brussels had been “constructive”.

He replaced David Davis, who quit in protest at Theresa May’s trade policy.

It comes as the IMF says some EU countries will suffer significant economic damage if the UK leaves without a trade deal.

Both the UK and EU are stepping up preparations for a “no deal” Brexit.

The two sides insist it is not what they want – and that reaching a deal by the autumn is still very much on the cards.

But they have yet to agree how their final relationship will work, with key issues around cross-border trade unresolved, and the UK’s official departure date of 29 March 2019 fast approaching.

The UK government is standing by its belief that “no deal is better than a bad deal” – and is set to issue advice to businesses on how to cope with that eventuality.

The European Commission has issued a paper instructing other EU states to prepare for a no-deal Brexit.

Possible consequences, the paper says, include disruption to the aviation industry and goods from the UK being subject to custom checks.

According to the IMF analysis, the organisation’s first since the UK voted to leave the EU in June 2016, 0.7% of the EU workforce could lose their jobs and economic growth could fall by 1.5%.

Ireland, which has the closest trade ties with the UK, would be the worst hit, according to the IMF report.

Taoiseach (Irish prime minister) Leo Varadkar has said his government is making contingency plans for “the unlikely event of a no-deal hard Brexit”.

Mr Varadkar said that – even if there is a deal – Ireland will need 1,000 new customs officers and veterinary inspectors to deal with changes in trade rules with the UK.

The EU’s ‘no deal’ preparations

If both sides come to the conclusion several months before the end of March that there will be “no deal”, they can at least make some contingency plans to deal with that.

But if there is a last-minute hitch, time will have run out. So, from the EU’s perspective, thinking about “no deal” means “preparing for the worst and hoping for the best”.

Much of the UK government would probably look at it in the same way – but there are many Brexiteers who think that “no deal” would be perfectly acceptable as long as sufficient preparations have been made.

Speaking to MPs before setting off for Brussels, Mr Raab said he hoped Mr Barnier would “fully support” the proposals for post-Brexit trade with the EU in the government’s White Paper.

And addressing the press as he began his first meeting with Mr Barnier, the MP – who was a leading figure in the 2016 campaign to leave the EU – vowed to get “best deal for Britain” and to tackle talks with “renewed energy, vigour and vim”.

Mr Barnier said it was a “matter of urgency” to agree on a “backstop” plan to prevent a hard border in Northern Ireland if no deal is agreed – and said a “close partnership” on security was “more important than ever given the geopolitical context”.

Mr Raab’s trip to Brussels comes with debate raging within the Conservative Party about what Brexit should look like.

On Wednesday, former Foreign Secretary Boris Johnson – who also quit over the proposals presented to the cabinet at Chequers – used his resignation speech to accuse Theresa May of “dithering” over the UK’s strategy for leaving the EU.

“It is not too late to save Brexit”, he said, calling for the government to “change tack”.

Former Remain supporters, on the other hand, were furious when the government changed its Customs Bill this week to comply with the demands of a Eurosceptic group of Tory MPs.

The EU says it will analyse the Chequers proposals, which were set out in full in a White Paper, before coming up with a response.