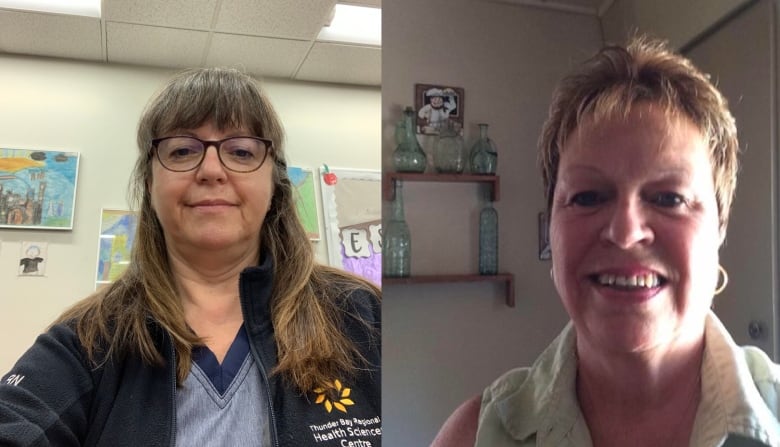 In February, a Thunder Bay woman put up a Facebook post in hopes of tracking down a brief, yet impactful connection from her past.

Terri Lacroix took a “shot in the dark” to reconnect with a nurse who helped her the day her husband died nearly 30 years ago, at the now-closed McKellar Hospital in the northwestern Ontario city.

“I was really on my own … this young woman was with me during the worst day of my life,” said Lacroix while recounting that day in November 1993. “I appreciated her that day, I really really did. And I just didn’t have a chance to thank her for what she did for me that day.”

Lacroix explained that her husband had been battling non-Hodgkin’s lymphoma when he suddenly came down with a cold after going through radiation treatment.

This is going to be a shot in the dark, but what the heck. I am looking for a nurse.– Terry Lacroix’s Facebook post

All in a span of 24 hours, John Ruthven, who was in his mid-30s, was taken to hospital, sent home, and then brought back to hospital again as his condition worsened.

“They took me in to see him and when I came out of the room where he was, that’s when my mom and dad showed up.” said Lacroix. “I just didn’t have a chance to thank her for what she did for me that day, you know, it was so traumatic.”

Pandemic serves as time for reflection

Nearly 30 years later, Lacroix said the pandemic made her stop and reflect on that time in her life. She said she was inspired to reconnect with her husband’s nurse, despite not even knowing her name.

“I thought I’ve seen other people use these kinds of platforms to find people, so I thought what the heck — I’ll just give it a go. It was amazing the response I got from all the nurses, I mean, they would’ve bent over backwards to help me find [her].”

Lacroix posted to a Facebook group called Thunder Bay Memories, asking for others to share her message in hopes of reaching the nurse.

“This is going to be a shot in the dark, but what the heck. I am looking for a nurse,” Lacroix wrote on Facebook.

Within a couple of days, Lacroix received a message from Cathy Duguay, a retired nurse in Thunder Bay who is now working in COVID-19 vaccination clinics.

“Somebody forwarded Terri’s little story from the Facebook page and as soon as I read it, I knew that I was there,” said Duguay.

“I didn’t contact Terri right away when I read the article, even though I knew I was there was because she said she was looking for a young nurse, and even though I was told back then that I looked a lot younger than I was, I was 31 years old when I was in emerge [emergency] doing my my clinical,” she added.

After contemplation and some hesitation, Duguay contacted Lacroix. She knew she was the nurse Lacroix was looking for because not only did she remember the case, but it stuck with her throughout her career, and even served as a learning experience.

It’s very satisfying to know that you had a career that touched somebody’s life.– Cathy Duguay, retired nurse

The two women exchanged messages, something Lacroix calls a “truly amazing” experience as she was finally able to properly thank Duguay for her support in 1993. They met online and hope to have a coffee together once pandemic restrictions are lifted.

“It’s crazy to be retired and have somebody reach out to you,” said Duguay. “It’s truly amazing. It’s very satisfying to know that you had a career that touched somebody’s life.”

9:07Terri Lacroix/Cathy Duguay: A Shot In The Dark

A story of lost connections and the power of social media… Hear how one Thunder Bay woman was able to track down a nurse from nearly 30 years ago so she could relay a proper thank you. 9:07