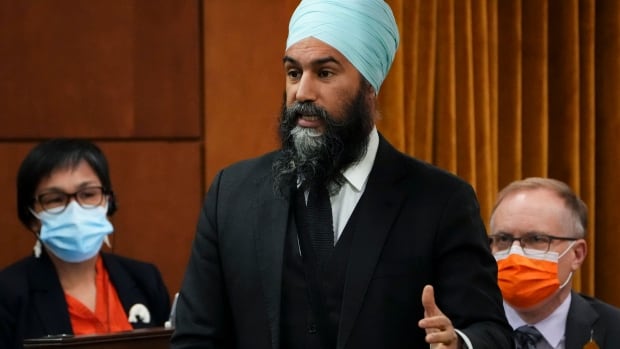 NDP Leader Jagmeet Singh is calling for an emergency debate in the House of Commons as the anti-vaccine mandate protest in Ottawa stretches into its second week.

In a letter Monday to Speaker Anthony Rota, Singh said he’ll ask for a debate on how to handle the occupation in Ottawa and the protests that have popped up around the country in support of ending all vaccine mandates.

“The situation has reached a crisis point. And in times of crisis, it is important for federal leaders to show leadership, to urge de-escalation and to work together to find solutions,” he wrote.

“For over a week, the people of Ottawa have been under siege, and a similar demonstration in Coutts, Alta., has blocked the border and prevented important goods from reaching the people who need them …”

The City of Ottawa declared a state of emergency over the weekend. Mayor Jim Watson described the situation in the country’s capital as the “the most serious emergency our city has ever faced.”

This morning, Watson floated the idea of the federal government appointing a “high-profile, respected senior statesperson” to mediate between protesters and governments and resolve the stalemate.

“There seems to be little movement on either part,” he said. “I’m not going to condone their activities by showing up and having a chit-chat with them. I want them to leave.”

Singh said the federal government should instead sit down with municipalities to resolve the problem.

“The organizers have made it clear their intention is to overthrow the government,” he said, adding “it’s clear that we need federal leadership right now.”

Last week, Prime Minister Justin Trudeau said he’s not willing to negotiate with the protesters who are demanding either an end to all vaccine mandates or a change in government.

“Having a group of people who disagree with the outcome of an election, who want to go a different way and bring in an alternative government, is a non-starter in a responsible democracy,” he said.