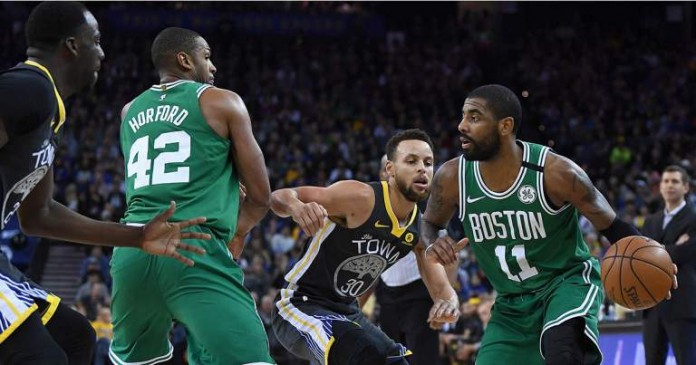 No one gets a ring for second place! Now that we have that out of the way, maybe we can talk about the 2017/2018 season and whom we think will occupy the top seed in each conference. Last season showed us it doesn’t matter who is the top seed in the conference if you don’t get a chance to go to the big dance.

The Boston Celtics clinched the top spot in the East just ahead of the Cleveland Cavaliers of whom they lost to in the conference finals.

Things are somewhat different this season and I do recognize the fact that what I just said could be the understatement of the year. Last year’s championship losing finalists, the Cavs, are in a funk, having lost 12 of their last 18 games. Conversely, last year’s eastern conference losing finalists the Boston Celtics are playing with a renewed purpose, leading said conference with a win/loss record of 39-15.

When you mention the Cavs in the East, you inevitably have to mention the Boston Celtics. As mentioned earlier, they are the top dogs in the conference and are inextricably linked especially this season when Cleveland traded their star point guard Kyrie Irving to the team in green. What the Cavs got in return can at best be described as a heartache.

The Celtics own the best win/loss record in the conference and are finally playing the way their GM Danny Ainge envisioned. I don’t forsee them dropping off in terms of their position and the player who will keep them there depending on his health will be Irving. He is shooting 48 percent from the field this season, an improvement from last season while also shooting 40 percent from three-point range. Finally, Boston have a true go to player, no knock to Isaiah Thomas.

The only team that can challenge the Celtics in the east will have to be the Toronto Raptors. I will single out Masai Ujiri who is the President of the franchise to their success. He has managed, over a short span, to collate a mini United Nations in the city of Toronto to make them one of the contenders for the Larry O’Brien Trophy.

Without a doubt, credit is also due to the players and the coaching stuff but to watch the front office make moves over the past five seasons that incrementally improve the team over and over, is a thing of beauty.

After their loss to the Cavs in the conference semi final last season, changes were inevitable and for a New York minute, it seemed one of their mainstays in Kyle Lowry would be leaving the cosmopolitan city. But fate in the form of that famed front office set wheels in motion to improve the team.

Serge Ibaka, who joined the team midway through the season has been one of those improvements. A big who can spread the floor with his dead eye shooting from behind the arc and at the same time defend the paint against any Ariel threats.

That said, everything starts and stops at the feet of one DeMar DeRozan. This season has seen an expansion in his game, shooting from beyond the arc with increased accuracy and frequency. This team is trying to make this year their year and with a solid All-Star in DeRozan and a hungry bench led by Cameroonian forward Pascal Siakam, the playoff world is set to be their oyster.

We move over to the Western Conference where it would be safe to assume that the current top-two teams will meet in the finals of their conference.

The Golden State Warriors and the Houston Rockets are fast becoming true rivals in the West. They hold first and second position respectively and are teams that one might consider super teams.

The Rockets one of the best backcourt combinations in the form of Chris Paul and James Harden. The former left the now hapless Los Angeles Clippers to seek treasure in the form of a championship ring and just like Frodo in the Lord of the Rings trilogy, it has somewhat become an obsession for the 12-year vet.

The Rockets are just two games shy of the top seed and I firmly believe a healthy CP3 can get them there. He hasn’t played a lot of games but in the ones he has managed to, he has shown poise and skill bereft of most the association’s traditional point guards.

He however is a reluctant shooter but when he does, he is a 40 percent shooter from three-point range and a 46 percent shooter from the field. The Rockets are 23-3 when Paul and Harden both play, speaking volumes of the point guard’s willingness to sacrifice for the betterment of the team. To borrow from LeBron James, Paul is the Jelly to Harden’s peanut butter.

The defending champions Golden State Warriors have not struggled in their quest for top seed, not really. This season is different however as a hungrier Rockets lie in waiting. Though admittedly mentally tired, The Warriors lead the league with a season best of 41-12.

The team has a plethora of stars and none come bigger or taller than Kevin Durant. He was their best player last season and who could forget his dagger three pointer right in front of LeBron James in last season’s finals. His move from the Oklahoma City Thunder to the Warriors was greeted by most with disdain. Even his new teammates didn’t adjust well to in the first half of that season.

Time, however, had other ideas and slowly everything came together. He became the team’s shot blocker and on ball defender. He made the Warriors better, if you can believe that.

This season, everything holds true to last season but rather than focusing on KD, Stephen Curry’s game has grown in stature. After missing some time on the court due to an ankle injury, Curry came back like he had never left and has been shooting close to 50 percent from the field and 42 percent from beyond the arc. It’s safe to say that this team is his team.

Jazz give Warriors the blues with win in Utah

Rodgers says Celtic have rejected a bid for Dembele