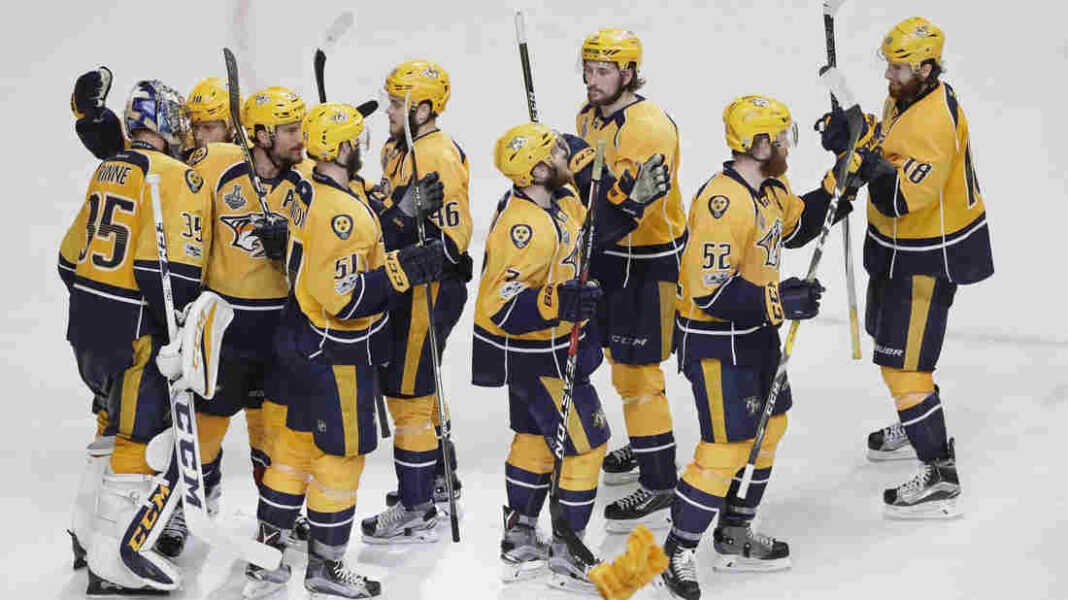 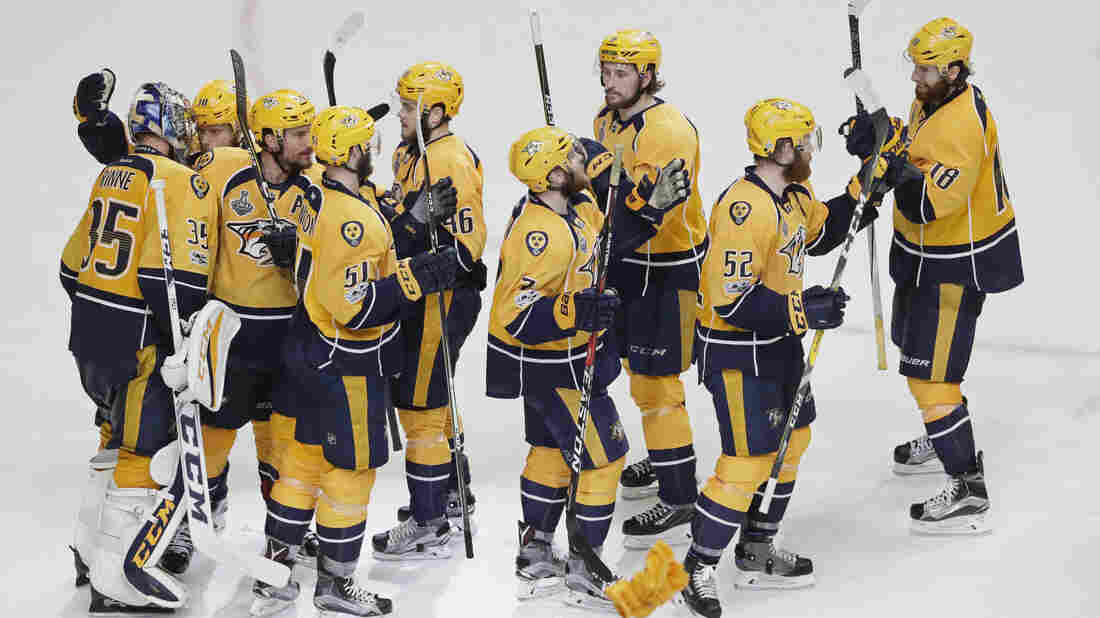 The Nashville Predators celebrate after their 4-1 win over the Pittsburgh Penguins in Game 4 of the NHL Stanley Cup Final on Monday night in Nashville, Tenn. Mark Humphrey/AP hide caption

The Nashville Predators celebrate after their 4-1 win over the Pittsburgh Penguins in Game 4 of the NHL Stanley Cup Final on Monday night in Nashville, Tenn.

“It’s hard to win when you score one goal,” Penguins coach Mike Sullivan said after the game.

The goal was Crosby’s first in a Stanley Cup Final since June 2009. He now has 161 career playoff points — securing the 20th spot in the NHL record book.

Gaudreau’s goal was his third of the series. His play has been attracting a lot of attention. The 24-year-old is an undrafted free agent and doesn’t even have a team locker.

“For now, Gaudreau insists he is happy enough just to sit on the floor as long as he plays.

“Gaudreau, a 24-year-old rookie, only has a chair in the locker room, but he now is the second player in NHL history to score his first three career goals in a Stanley Cup Final, joining Johnny Harms with the 1944 Blackhawks.

“He’s been unbelievable for us the way he’s come in, and he’s just been so good, timely goals and composed,” Nashville captain Mike Fisher said. “He definitely belongs, and he’s been a huge part of our success.”

“Gaudreau is also just the third rookie to score game-winning goals in consecutive games in the Stanley Cup Final since the NHL took over sole possession of the trophy in 1926-27. Pittsburgh’s Jake Guentzel did it in the first two games of this series and Roy Conacher did it for Boston in Games 3, 4 and 5 against Toronto in 1939.”

It was a star-studded night at the game in Nashville: Country singer Dierks Bentley sang the national anthem while fellow singer Jason Aldean waved a towel to rev up the crowd.

Singer and actress Carrie Underwood, who’s married to Predators captain Mike Fisher, admitted that she hadn’t gotten her husband a birthday present. He turned 27 on Monday. She’s hoping a Stanley Cup championship will fill that void.

Game 5 is Thursday night in Pittsburgh. The Penguins won the first two games in the series at home.