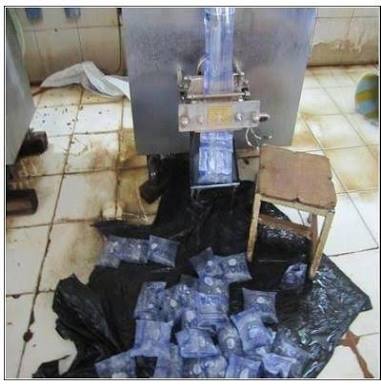 The National Agency for Food and Drug Administration and Control, NAFDAC, has shut down some facilities involved in illegal production of sachet water in Okrika Local Government Area of Rivers State.

NAFDAC’s officials also made some arrest before sealing off the facilities where it said sachet water was being produced in what it described as alarmingly unhygienic conditions.

According to a statement signed by NAFDAC Coordinator in Rivers State, Chinelo Ejeh, the agency found that the sealed factories were packaging water directly from boreholes without any form of treatment.

Chinelo Ojeh noted that “The illegal sachet water factories clamped down in Okrika were located in dingy rooms within live-in apartments in close proximity to toilets and dirty drainage channels.”

The NAFDAC State Coordinator therefore called on other sachet water producers still involved in illegal packing in unhygienic conditions to put a stop to such unwholesome practice or be ready to go to jail.

She said NAFDAC would not relent in its mandate of safeguarding the health of the nation and ensuring that only registered wholesome water and other regulated products are produced and sold to the public.

“The Agency is also appealing to members of the public to always avail NAFDAC of information regarding illegal producers of regulated products,” Chinelo said.