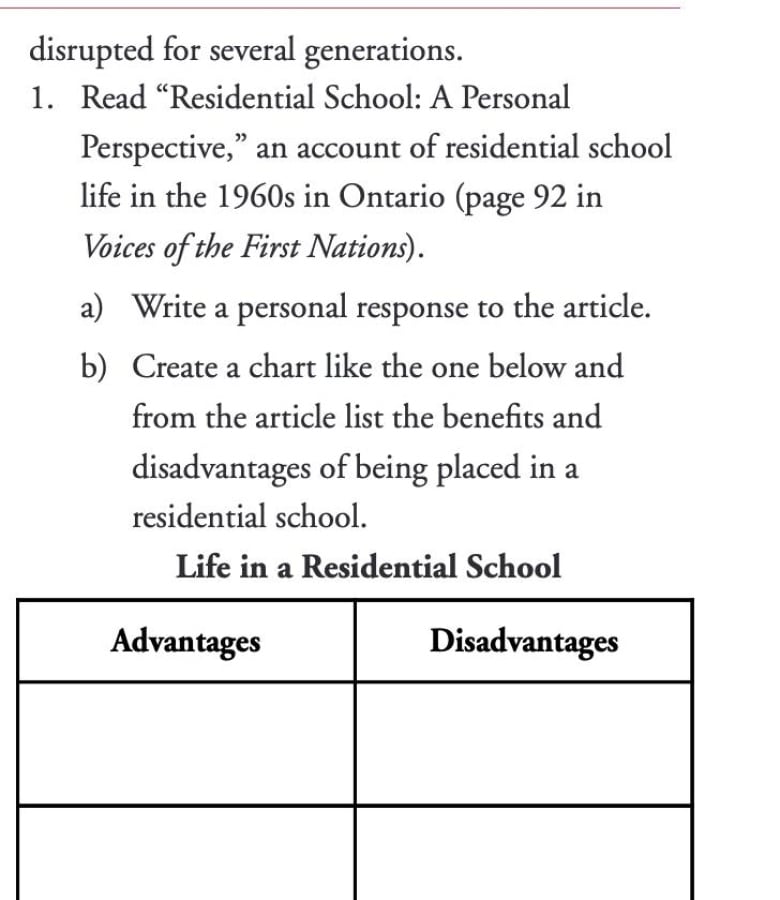 A Mi’kmaw student says she was saddened and hurt to see racist stereotypes about Indigenous people included in her Grade 10 English correspondence course, which also asked students to list the advantages and disadvantages of attending residential school.

Malaika Joudry-Martel started the correspondence course in March and was slowly plugging away at it this week when her mother, shalan joudry, asked to take a look at it.

“I was scrolling through and some of the other language through the other units was problematic, and my Spidey senses were tingling. And she said, ‘Mama, you’re not going to like the First Nations unit,'” said joudry, who spells her name with lower case letters.

When joudry scrolled through to the last unit, she found an assignment where students were asked to read an article, write a personal response and then create a chart based on the article, listing the benefits and disadvantages of being placed in a residential school.

“Coming off the heels of all the news about the children being unearthed was such a stark moment to be looking at this,” she said.

Late last month, children’s remains were found at the site of a former residential school in Kamloops, B.C. Preliminary findings suggest the unmarked burial site could contain the remains of 215 children, according to the Tk’emlúps te Secwépemc First Nation.

joudry said in her small community of L’sɨtkuk, also known as Bear River, N.S., a generation of children who went to the Shubenacadie Residential School in Nova Scotia “did not come home well.”

“We today are living with the effects of that school,” she said.

“This is going against the flow of where we want to head in reconciliation,” she said.

Joudry-Martel said when she first saw the material a couple of weeks ago, she closed the computer and cried.

“I very much was overwhelmed and I cried a lot that day,” she said. “It was very hurtful.”

She said it’s troubling to think other students could read that material and accept it as fact.

“They’d be like, ‘OK, well, here’s a fact and this is true.’ And so they’d be taking that with them, and then in the future, they’d still believe that because it would stay with them,” she said.

Correspondence courses are self-directed and have no teacher, but students’ work is sent to a marker for evaluation.

joudry wrote a post Wednesday on Facebook about the course content, and the post eventually made its way to Education Minister Derek Mombourquette, who called her the next morning to apologize and tell her the material was being removed.

Mombourquette told CBC News he wasn’t sure how old the course material was, or what type of approval process it went through before being sent to students.

“This was an oversight and it made it out and it shouldn’t have made it out. And I apologize for it getting to the students,” he said Thursday.

Mombourquette said the province is in the process of phasing out its correspondence courses, but he is now ordering a review of all such courses.

He said the content of that class does not reflect the general curriculum in the province.

“We work very closely with our Mi’kmaw elders to design treaty education and education around residential schools based on the recommendations of the Truth and Reconciliation Commission,” he said.

Mombourquette thanked the family for coming forward and raising the issue.

He said about 75 students were taking the correspondence course, and the department is contacting all of them to offer support.