My husband was diagnosed with dementia at 48, and I felt like fleeing 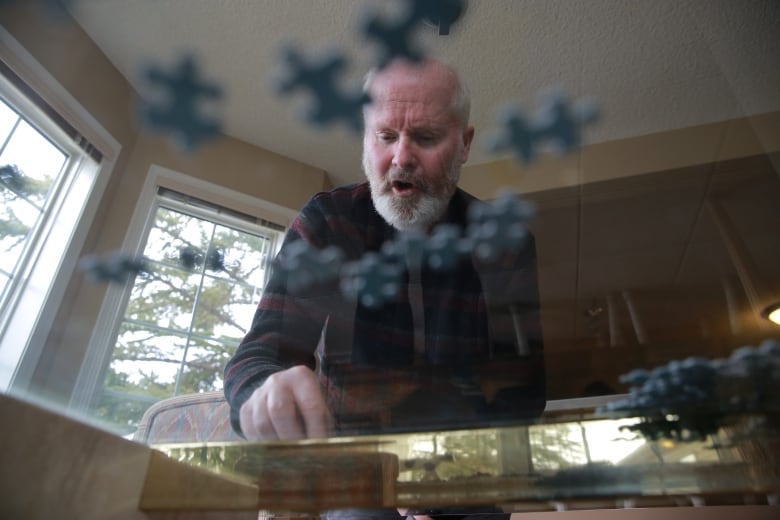 This First Person column is written by Cindy McCaffery who is a caregiver for her husband. For more information about CBC’s First Person stories, please see the FAQ.

“How did it feel to find out at age 48 that you have dementia?” I asked my husband.

John looked up at me with a look I’m well familiar with after living with his brain disease for 14 years. The look isn’t exactly consternation — more like concentration — his jaw set stiff, showing a deep determination to understand and process my query. Thinking is hard work for a person with dementia. His eyes squinted a little.

Oops, I realized I’ve interrupted his brain exercises — the online games that challenge his attention in the hopes of staying ahead of this disease. I should’ve waited until he was free because when he’s focused on something it’s hard for him to change tack.

I told him I’d joined a writers’ circle of care partners, thinking that by sharing our story, we could help lessen the stigma around young onset dementia and hopefully find more support. There isn’t the same programming for people under the age of 65 compared to seniors in Alberta, so days caring for someone with young onset dementia can be long, lonely and dull.

John took a bit of a breath and rubbed his eyes, the way he always does when he tries to think or is tired.

He squinted again and said, “I thought, ‘Aw crap!’ I had just recovered from dealing with my dad’s death and settling his estate and, of course, mum’s death…” His voice trails off, and I know he’s thinking about how history might be repeating itself.

John maintains his mum died of a broken heart. She became seriously ill after about a decade of managing her husband’s gruelling decline to death at age 62 from Alzheimer’s. She was crushed from the guilt of moving him into a care facility where strangers looked after him. He ended up dying alone in a locked room — devoid of furnishings for his own safety except for a mattress on the floor — unaware that his wife of over 30 years had died some six months earlier.

“My first thought was that I should move to an ashram in India so you wouldn’t have to deal with me. The monks can take care of me. You shouldn’t die just because of me. Plus, care here is super expensive.”

Then he turned the question to me. “How did you feel when you learned I have dementia?”

I stay silent. I’ve looked into one-way flights to India on days I feel like I can no longer cope with his dementia.

In the weeks following his diagnosis of “probable frontotemporal lobar degeneration,” I recalled feeling like I was alone on a beach watching my friends, family and peers sail away on a boat without me; they didn’t even look back. My stomach complained daily from anxiety and all I could eat was chicken soup.

I plunged into every article written on young onset dementia, but strangely, as complex as the brain is, there were only a few things for me to learn and accept: There is no cure and death is inevitable after a progression of two to 20-plus years.

Roughly 16,000 Canadians under age 65 have young onset dementia. Symptoms in behaviour, language and movement are highly variable. Average life expectancy is seven to 13 years after symptoms appear and the most common cause of death is pneumonia.

My biggest fear was that John would end up living in a seniors’ facility, restrained in a wheelchair, sporting a blue drool bib and lined up against a wall “watching” TV with others in the same miserable condition. I needed to shake this image and find a way to cope.

Thankfully, therapy with a compassionate social worker from Alberta Health Services and good friends helped me work through my fear and anger, as well as the anticipatory grief.

We still don’t know if his type of brain disease will end up causing aggression or other behaviour issues and speech problems. So far, he is still steady, optimistic and cheerful, striving to live up to his motto to “have a good day, every day.”

John didn’t notice that I didn’t answer him.

He continued, “I’m glad you keep up with your friends and your interests apart from me. And you joined that care partner support group. My mum didn’t want to join a group of other grieving and anxious people. It was hard to see her and dad’s friends disappear because of the stigma of dementia. I think you’re doing the right things during a really trying, crappy time.”

I should’ve expected him to say something so considerate, because he is an exceptionally kind person, but I was still taken aback.

Even with a degenerating brain he still thinks of others first. And that is one of the many reasons we haven’t looked into the ashrams lately.

This month, the CBC team in Alberta will focus on family caregivers and the challenge Alberta faces reforming care for the frail and elderly. Visit cbc.ca/familycare to read more.

Do you have a compelling personal story that can bring understanding or help others? The CBC’s First Person team wants to hear from you. Here’s more info on how to pitch to us.