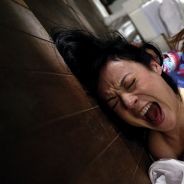 As lifelike and creepy as the killer doll Chucky appears in the horror series that bears his name, the animatronic puppet used by the filmmakers on set has its limitations. So there was Jennifer Tilly, the human face of the franchise, repeatedly bashing her face into the floor on the set of 2004’s Seed of Chucky.

“Sometimes I’m a little bit aware that Chucky is not pulling his part,” Tilly told Yahoo Entertainment during a recent Facebook Live interview promoting their latest kill fest, Cult of Chucky. “There was one scene where Chucky was smashing my head on the ground, and it was just me… We don’t have a lot of money for special effects, so I was smashing my own head on the ground. I’m like, ‘Chucky, I’m doing all the work here.’ And I hit my head on the floor so hard I got a little bit of a bruise on my cheek.”

Tilly said it’s all par for the course on the surreal set of a Chucky film, where a team of six or seven puppeteers collaborate to animate the doll — and even keep him active (and inappropriate) after the cameras have stopped rolling.

“You wouldn’t think of him as a co-star, but I really do think of him as a person, because the puppeteers like to practice in between shots,” she explained. “So when they say ‘Cut!’ you would think Chucky would fall over and lie flat.

“But he doesn’t. He walks around. He scratches his butt. He walks over to craft service, he sticks his finger in the food, then he winks at me. He’s really gross. He’s like a really gross little co-star.”