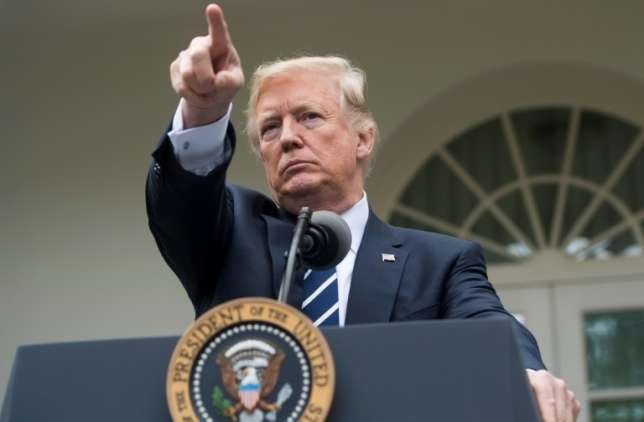 Speaking after Iraqi troops and tanks swept across the northern province capturing oil and military targets from the Kurds and seizing the governor’s office in Kirkuk city, Trump made clear he was not going to inject himself into the dispute between two US allies in the fight against the Islamic State group.

“We’re not taking sides, but we don’t like the fact that they’re clashing,” Trump told journalists.“We’ve had for many years a very good relationship with the Kurds.

“We’ve also been on the side of Iraq,” he said, “but we’re not taking sides in that battle.”

The Kurdish independence referendum last month and the Iraqi backlash follows a long-simmering conflict between the two sides over the Kurds’ desire for more autonomy, if not their own state on the border with Turkey.

The State Department said the US is “very concerned” by the violence and urged “all parties to avoid provocations that can be exploited by Iraq’s enemies who are interested in fueling ethnic and sectarian conflict,” emphasizing in particular the Islamic State group.

In a statement, agency spokeswoman Heather Nauert said the US supports “the peaceful exercise of joint administration by the central and regional governments, consistent with the Iraqi Constitution, in all disputed areas.”

At the Pentagon, spokesman Colonel Rob Manning told journalists that US forces were neither taking part nor providing support to either side in the Kirkuk standoff.

“While we support a unified Iraq, we do not support both sides going out at each other,” he said.

“We oppose violence from any party and urge against destabilizing actions that distract from the fight against ISIS,” Manning added, using the usual US abbreviation for IS.

He called the decision to hold the referendum “unfortunate” and urged dialogue and actions based on the Iraqi constitution.

“We continue to support a unified Iraq,” he said.

Manning confirmed that here were US troops deployed with both sides’ armies in the Kirkuk region, but would not say how many.