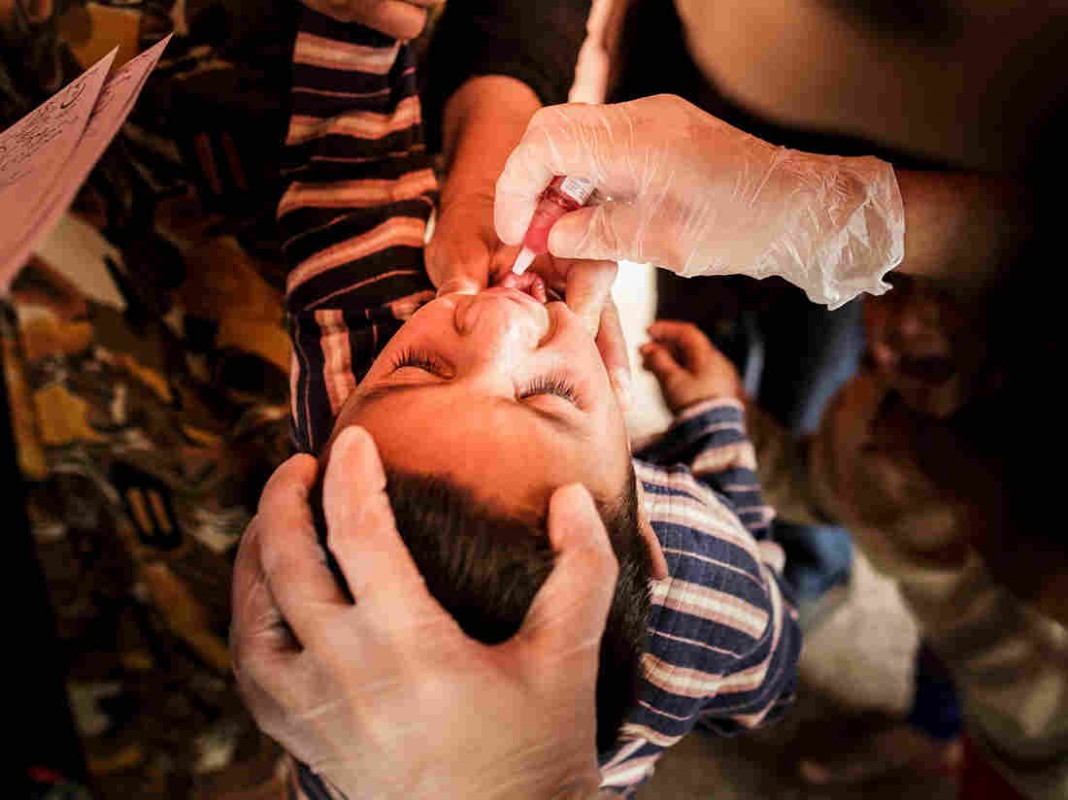 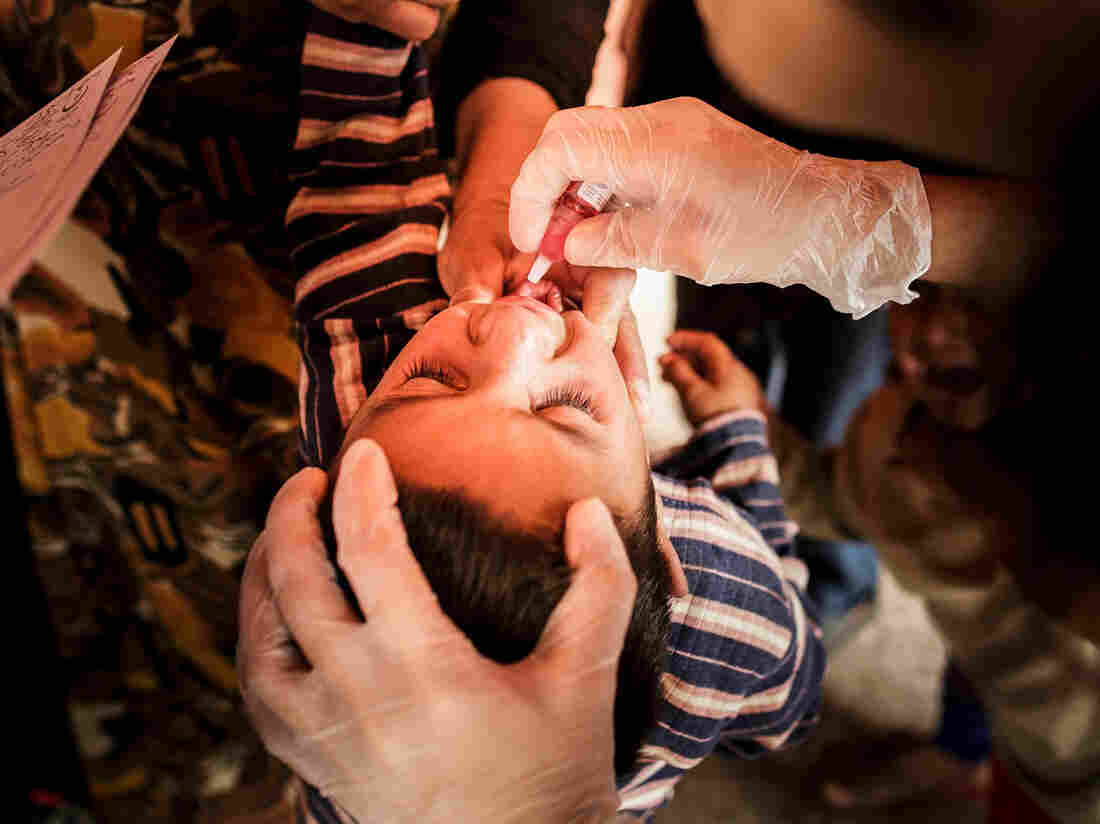 Nurses give the oral polio vaccine to a Syrian child in a refugee camp in Turkey. Carsten Koall/Getty Images hide caption

Nurses give the oral polio vaccine to a Syrian child in a refugee camp in Turkey.

So far in 2017, there have been only six cases of “wild” polio reported anywhere in the world. By “wild” public health officials mean the disease caused by polio virus found naturally in the environment.

By contrast, there have been 21 cases of vaccine-derived polio this year. These cases look remarkably similar to regular polio. But laboratory tests show they’re caused by remnants of the oral polio vaccine that have gotten loose in the environment, mutated and regained their ability to paralyze unvaccinated children

“It’s actually an interesting conundrum. The very tool you are using for [polio] eradication is causing the problem,” says Raul Andino, a professor of microbiology at the University of California at San Francisco.

The oral polio vaccine used throughout most of the developing world contains a form of the virus that has been weakened in the laboratory. But it’s still a live virus. (This is a different vaccine than the injectable one used in the U.S. and most developed countries. The injectable vaccine is far more expensive and does not contain live forms of the virus.)

Andino studies how viruses mutate. In a study published in March, he and his colleagues found that the laboratory-weakened virus used in the oral polio vaccine can very rapidly regain its strength if it starts spreading on its own. After a child is vaccinated with live polio virus, the virus replicates inside the child’s intestine and eventually is excreted. In places with poor sanitation, fecal matter can enter the drinking water supply and the virus is able to start spreading from person to person.

“We discovered there’s only a few [mutations] that have to happen and they happen rather quickly in the first month or two post-vaccination,” Andino says. “As the virus starts circulating in the community, it acquires further mutations that make it basically indistinguishable from the wild-type virus. It’s polio in terms of virulence and in terms of how the virus spreads.”

In June, the World Health Organization reported 15 cases of children paralyzed in Syria by vaccine-derived forms of polio. These cases come on top of two other vaccine-derived polio cases earlier this year in Syria and four in the Democratic Republic of Congo.

“In Syria there may be more cases coming up,” says Michel Zaffran, the director of polio eradication at the World Health Organization. He says lab work is still being done on about a dozen more cases of paralysis to confirm if they’re polio or something else.

The cases in Syria are all in the east of the country near the border with Iraq.

It’s become fairly common each year for there to be one or two small outbreaks of vaccine-derived polio. These outbreaks tend to happen in conflict zones where health-care systems have collapsed.

“These outbreaks are occurring only in very rare cases and only in places where children are not immunized,” says Zaffran. The regular polio vaccine protects children from vaccine-derived strains of the virus just as it protects them from regular polio. Vaccine-derived outbreaks, he says, “occur where there are large pockets of unimmunized children, pockets sufficiently large to allow for the circulation of the virus.”

WHO is staging a massive response to the Syrian outbreak. In early July WHO along with local health officials and aid groups plan to vaccinate a quarter of a million kids. The goal is to reach every child under five in the area with two doses of two different types of polio vaccine, spaced one to two weeks apart. This would be a logistical challenge in most parts of the world, never mind in war-torn Syria.

“The access in these areas is a bit limited because of the presence of ISIS,” Zaffran says in what seems like an understatement. Eastern Syria is home right now to Syrians who’ve fled from Raqqa (the ISIS capital in Syria), other parts of the country and even Iraq. “Also there’s a risk that the fighting might actually move to this area,” Zaffran adds.

Zaffran is confident that the rogue vaccine-derived virus circulating in eastern Syria right now can be wiped out with a massive blast of more vaccine.

“We knew that we were going to have such outbreaks. We’ve had them in the past. We continue to have them now. We know how to find them and we know how to interrupt them. We have the tools to do that,” Zaffran says. “So it’s hiccup … a very regrettable hiccup for the poor children that have been paralyzed of course. But with regards to the whole initiative you know it’s not something that is unexpected.”

WHO is attempting to phase out the use of live oral polio vaccine to eliminate the risk that the active virus in the vaccine could mutate into a form that can harm unvaccinated children.

But for now the live vaccine continues to be the workhorse of the global polio eradication campaign for a couple of reasons. First it’s cheap, costing only about 10 cents a dose versus $3 a dose for the injectable, killed vaccine. Second, it can be given as drops into a kid’s mouth, which makes it far easier to administer than the inactivated or “killed” vaccine, which has to be injected. Third, there simply isn’t enough killed vaccine on the market to vaccinate every kid on the planet, and vaccine manufacturers don’t have the capacity to produce the quantities that would be needed if such a switch happened immediately.

And finally the live vaccine stops transmission of the polio virus entirely in a community if sufficient numbers of people are vaccinated. The killed vaccine doesn’t fully block the virus from spreading because a person who is immunized can still carry and spread the polio virus. And this is an important difference between these two types of vaccines when the goal is to exterminate the polio virus.

“The fact is this [the live oral polio vaccine] is the only tool that we have that can eradicate the disease,” says Zaffran.

That eradication effort has been incredibly successful. In 1988 when the campaign began there were 350,000 cases of polio around the world each year compared to the six so far this year.

Zaffran credits the oral polio vaccine with getting the world incredibly close to wiping out a terrible disease.

“Four regions of the world have totally eradicated the disease with the use of the oral polio vaccine,” he notes. “Of course we need to recognize that there have been a few cases of children paralyzed because of the vaccine virus, which is regrettable. But you know from a public health perspective, the benefits far outweigh the risk.”