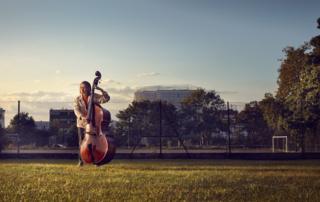 A London photographer has been taking portraits of musicians rehearsing outdoors this summer, as rent for creative spaces continues to rise.

London is one of the most expensive city in the world for commercial rents and practising in parks is one of the ways musicians can creatively fit in their daily rehearsal hours.

“The space that is left for musicians and creatives across London is being squeezed by new developments and rocketing commercial rents,” Jon Enoch says .

“I know this working in a creative industry myself.

“I have a studio in south London, so I know how much people struggle to find affordable spaces, without which they could not pursue their professional work.”

“Most musicians have to teach, get another job, or make another plan.

“The practice time is absolutely essential and you have to put in the hours to get where you want to be.

“The beauty of being a musician is that is takes you to amazingly ridiculous places.

“These big acoustic horns are made for playing outdoors.

“When I was younger, I knew more people who could afford their own space.

“But now, the group I play with pays £400 per month for a small room with no windows, just because it’s 24-hour access.

“It’s so expensive to do this.”

Spokeswoman Jamie Pullman said: “The Musicians’ Union is keenly aware of the problem of rehearsing at home and the expense of hiring a rehearsal studio.

“Spaces are so limited in London that it can be very difficult to afford a space for four hours a week, let alone four hours a day.

“We are told that musicians occasionally practise in parks and other public spaces as a very creative solution to their rehearsal space problems, although of course it’s entirely dependent on the weather.

“There are some good schemes going on to try and help.

“In the end though, we need more spaces for people to be creative in and we need them now.”