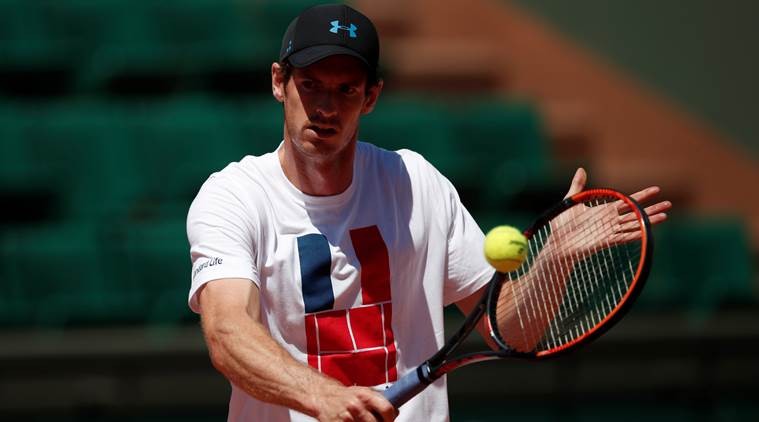 With intimations of his Roland Garros demise appearing greatly exaggerated, world number one Andy Murray played it straight by the French Open form book on Tuesday with a mostly regulation 6-4 4-6 6-2 6-0 first-round win over Russia’s Andrey Kuznetsov.

After a confidence-sapping run-in to the tournament he came within one match of winning last year, the top seed would have been hoping for an easy introduction to settle the nerves.

For the most part, his 73rd-ranked opponent obliged, as the rich run of form that last week took Kuznetsov to the semifinal of the Geneva Open deserted him under the gaze of a packed Philippe Chatrier crowd.

For a while some may have sensed the possibility of a third shock as the Scot began tentatively, his tennis underpowered and his manner subdued.

Recovering from illness and injury, his love affair with clay has turned sour this year, with early-round losses this month to Borna Coric in Madrid and Fabio Fognini in Rome.

He was broken when serving for the first set at 5-4, but Kuznetsov handed the break right back in the next game. Murray then lost his bearings midway through the second set, dropping four games in a row to allow the Russian to square the match.

Bolstered by the returning presence in his box of Ivan Lendl, his coach in grand slams since 2012 and credited with adding an extra edge of aggression to his game, the Scot then moved through the gears, mixing drops shots with lobs and adding more depth to his groundstrokes.

He breezed through the third and fourth sets with the loss of just two games and ended the match full of smiles that hinted at his relief over a potentially tricky hurdle negotiated.

“He (Kuznetsov) goes for his shots, he plays very aggressively… so he takes your time away. But it was quite windy today… and that can make things difficult,” Murray said in a courtside interview.

“I started to play better as the match went on… I have very good memories of Paris and I will try to have another good run this year.”

WAWRINKA WINS TO GET CAMPAIGN ROLLING

The 2015 champion struggled to time the ball on an overcast Court Suzanne Lenglen, frequently spraying his trademark backhand drive long or into the net as he looked to keep the points short against 152nd-ranked Kovalik, who was making his Roland Garros debut.

But the Swiss did enough to win the rallies that mattered, extricating himself from a deep hole in the second set tiebreak, taking the last five points after trailing 6-3.

After connecting well with a backhand to take the final point, a sigh of relief as he approached the net suggested he was glad to put the encounter – lasting a shade under two hours and in which he made 33 unforced errors – behind him.

Having had less time than he might have wished to adjust between Geneva, where he took the title on Saturday, and Paris, he took the longer view in upbeat comments after the match.

“It wasn’t particularly easy after Geneva… but I feel good,” Wawrinka said courtside. “I hope to go deep (into the tournament) this year.”

Australian Nick Kyrgios shrugged off injury concerns and kept his emotions in check to outclass Germany’s Philipp Kohlschreiber 6-3 7-6 6-3, booking his spot in the second round.

The 18th seed, notorious for his on-court tantrums, showed no signs of being hampered by the hip injury that forced him out of the Rome tournament earlier this month.

Kyrgios, who faces either South Africa’s Kevin Anderson or Tunisian Malek Jaziri in the next round, has also been receiving treatment for a shoulder injury.

But the 22-year-old, considered among the most gifted players of his generation, fired a total of 20 aces, including six in the first set, which he claimed in 30 minutes.

“There were a lot of questions about how I would perform today,” Kyrgios told reporters. “I did not play many matches on clay and was not feeling that confident.”

“I thought it would be tough. But I served really well at important times of the match.”

A mini-break in the tie break was enough to hand him the second set as Kohlschreiber struggled with the Australian’s whipped groundstrokes and repeated audacious dropshots.

Kyrgios, who sealed his victory on his first match point, recently teamed up with former French pro Sebastien Grosjean after years without a coach.

“To get to the top five and compete in the slams I need to have someone in my corner. It’s time now to knuckle down,” he said Kyrgios, whose quick and powerful game is more fitted to hard or grass courts than the French clay.

“I don’t really like running. I don’t like that my shoes get dirty. I don’t train too much on clay as it makes my car dirty.”

“It can be enjoyable. I play well on clay but it’s not my favourite surface,” he said.

Juan Martin del Potro made a successful return to Roland Garros after a five-year absence, setting aside injury concerns to sail through 6-2 6-1 6-4 against fellow Argentine Guido Pella.

The 29th seed, whose career has been plagued by injury, only confirmed his participation in this year’s French Open on Friday after suffering shoulder and back problems.

Del Potro, who reached the French Open semifinals in 2009, moved across court six with no apparent signs of discomfort, sending down 13 aces in outclassing qualifier Pella in just under two hours.

Tuesday’s match was Del Potro’s first on the Paris clay since 2012, when he lost in the quarter-finals to Roger Federer.

Spanish veteran Fernando Verdasco stunned ninth seed Alexander Zverev, eliminating the in-form German 6-4 3-6 6-4 6-2 in a first round match that was suspended overnight after a long debate between both players and the umpire.

The 33-year-old clay court specialist outmuscled the German when play resumed on Tuesday at one set each, with Zverev having lost momentum from a day earlier when he had grabbed the second set and looked in control.

Instead of pushing to play on on Monday evening, Zverev agreed to Verdasco’s request to call a halt shortly after 8:30 p.m. local time, a decision that proved disastrous for the German.

The 20-year-old world number 10, who has already won three titles this year including the Italian Open and was seen as an outside bet for the title in Paris, had no answer on Tuesday to Verdasco’s punishing ground strokes.

The Spaniard, who has won six of his seven career titles on clay, broke Zverev twice to clinch the third set before the German collapsed in the fourth.