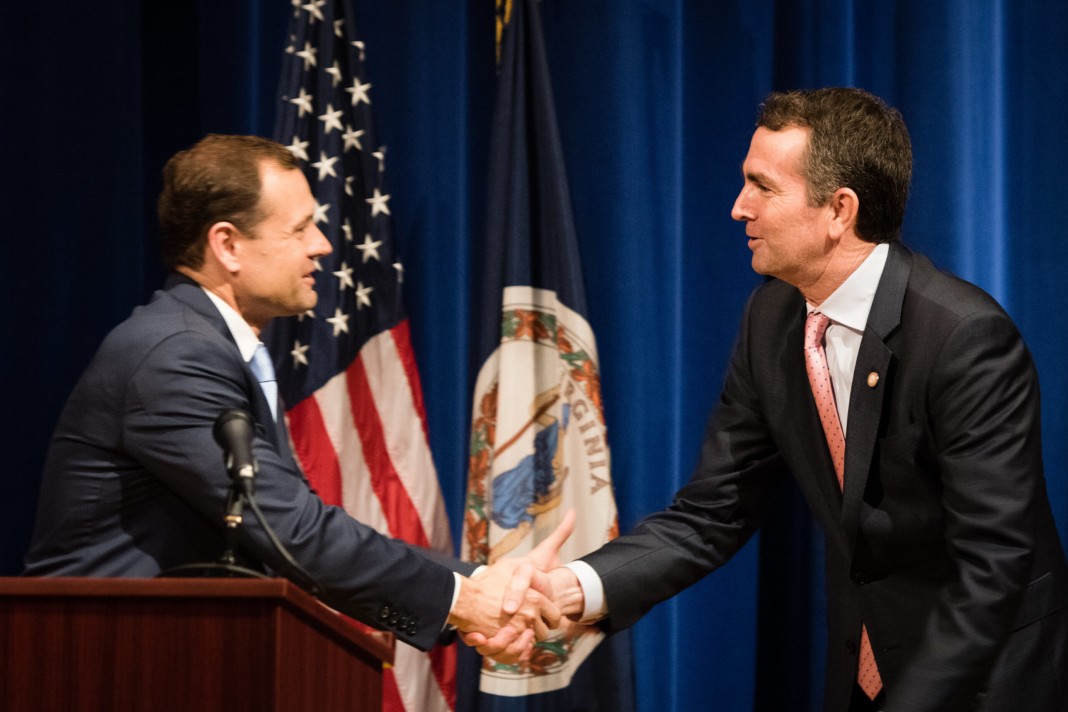 CHARLOTTESVILLE — Democrat Justin Fairfax used an infamous Virginia antiabortion bill to go after Republican Jill Vogel on Wednesday, when the two rivals for lieutenant governor faced off at a candidate forum.

Vogel, a state senator from Fauquier County, sponsored a 2012 bill that would have required most women who get abortions to first undergo a vaginal ultrasound.

The comment set off one of the sharpest exchanges of their 90-minute appearance at Piedmont Virginia Community College, with Vogel declaring, “The attacks that he just levied are 100 percent false.”

Fairfax, who also criticized Vogel’s conduct in a mudslinging GOP primary, shot back: “Facts are not attacks.”

[The GOP race for lieutenant governor got ugly]

Fairfax and Vogel are fighting for a part-time, low-profile post with just two constitutionally mandated duties: presiding over the state Senate (and breaking certain tie votes) and taking over if the governor is incapacitated or leaves office.

Moderator Bob Gibson, communications director of the University of Virginia’s Cooper Center for Public Service, listed a third duty: “Running for governor. They all do, and the winner will.”

Virginia’s lieutenant governorship often serves as a steppingstone in a state in which the governor’s mansion turns over every four years. Almost every lieutenant governor in modern history has run for governor, including the Democratic incumbent, Ralph Northam. He faces former Republican National Committee chairman Ed Gillespie in November.

The lieutenant governor’s office has become more powerful in its own right in recent years, with a closely divided Senate producing more ties to break. The GOP has a 21-19 edge in the chamber.

A Virginia Commonwealth University poll released this week had Fairfax up, 43 to 38. But Vogel had the advantage in the latest campaign finance reports, raising $1.8 million to Fairfax’s $1.3 million.

Fairfax and Vogel came face-to-face at the forum — sponsored by the college and by the public affairs nonprofit Senior Statesmen of Virginia — that was not technically a debate but still allowed them to tangle over a range of issues.

Vogel opposed new restrictions on guns, while Fairfax called for universal background checks. Vogel said she opposed changing Virginia’s no-limits campaign finance rules, saying caps would restrict speech. Fairfax noted a $600,000 donation Vogel received from a relative. That relative was her father, William B. Holtzman, founder of Holtzman Oil Corp. Fairfax said he supports limits so that wealthy interests “do not drown out other people’s voices.”

Vogel said cities and town should not be allowed to “erase history” by removing Confederate monuments. Fairfax said localities should have the option.

Both agreed that climate change is real, that Virginia needs nonpartisan redistricting and that employers should have to check the immigration status of workers.

Fairfax, who narrowly lost the 2013 primary for attorney general to Mark R. Herring, said he would focus on the economy. He repeatedly credited the state’s high job growth and low unemployment rate to outgoing Gov. Terry McAuliffe (D), Northam and Herring, who is seeking reelection.

Vogel billed herself as an experienced legislator who has crossed party lines to fight for nonpartisan issues, such as helping families with autism. She noted that she has bucked her party on a number of issues — by opposing uranium mining, for instance, and by supporting gay rights, medical marijuana and nonpartisan redistricting. She indicated that she would not support further restrictions on abortion rights.

“I am not running to take anybody’s rights away,” she said while discussing women’s health care.

When Fairfax invoked her 2012 abortion bill to attack that notion, Vogel pushed back hard.

“There was nothing in that bill that forced them to do anything against their will,” she said, a claim she based on the fact that abortion providers typically perform ultrasounds with or without a government mandate. “It was simply an informed consent bill.”

As originally proposed, Vogel’s bill would have required that women undergoing abortions first submit to an ultrasound and that they be offered an opportunity to view the image. The bill did not specifically mandate a vaginal ultrasound, but that would have been the effect in most cases because most abortions occur early in pregnancy, when the fetus is too small to be seen via abdominal ultrasound.

“Saturday Night Live” and late-night comics lampooned the measure, and Vogel eventually withdrew it. A House version was eventually passed but was amended to require an abdominal ultrasound — although in most cases, the test will not produce an image. Then-Gov. Robert F. McDonnell (R) signed it into law.