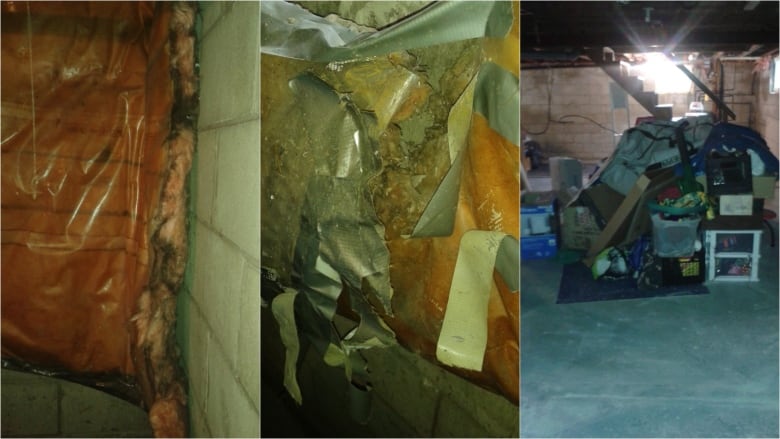 Several tenants living in units managed by Ontario Aboriginal Housing Services (OAHS) say their homes are “falling apart,” harming their health, and they accuse the non-profit organization of sloppy repair and maintenance work or delays in responding to complaints.

OAHS is a non-profit that receives funding from the provincial government with more than 2,000 units across Ontario. Its mandate is to provide “safe, affordable housing” for rural and urban Indigenous people in the province.

CBC spoke to several of the organization’s tenants, some of whom did not want to speak publicly for fear of eviction or other consequences. They described recurring leaks and floods, insecure kitchen cabinets and structures, and broken septic systems at their units. Several families blamed respiratory problems on mould.

The tenants — many of them living on a low income and some relying on disability benefits — said their physical and mental health has been harmed while living in these homes, and they can’t afford to continue to pay for home maintenance out of their own pockets.

When CBC shared a list of tenant concerns, the housing organization said some of the allegations were “entirely false,” though it wouldn’t elaborate, citing tenant privacy.

“We are extremely confident that we engage the appropriate professionals and undertake the required work to ensure the health and safety of all our tenants,” spokesperson Sarah McBain said in a written statement sent to CBC.

Within a month of moving into her detached bungalow in the summer of 2014, Wagamese said her family noticed mould under their new mattress.

“I didn’t understand how that would have happened, but I didn’t question the house at the time,” she said.

The situation then worsened a few months later.

“We started to notice in the basement there was a funny smell,” she said. “We just noticed all the moisture on the walls, the plastic was hanging off the walls, hanging with water full in the plastic. The insulation on the walls was all covered in black.”

Wagamese said her family’s belongings, including valuable personal mementos, were “soaked and covered in mould.”

“We lost everything … All our photo albums, all my [child’s] baby pictures, my beds, our dressers, living room furniture, everything had to go in the garbage,” she said.

“My [child] was so sick because of the bad mould … It tore our family apart.”

CBC shared her photos from that period with a home inspector who expressed concern about evidence of leaks in the home’s foundation but said they couldn’t confirm the presence of mould without lab tests.

OAHS hired contractors to fix the foundation in November 2014, and work continued in the home until 2016, said Wagamese. According to an email from OAHS sent to Wagamase in May of that year, an air quality report from its contractor, Mold Busters, concluded that “all issues were remedied.”

However, a water lab analysis completed by Public Health Ontario three months later showed there was “significant evidence of bacterial contamination” and found that the home’s water may be “unsafe to drink.”

An air quality test conducted in September of that year by a different company uncovered some mould-causing bacteria in the living room and basement.

Wagamese initially hired a lawyer to seek compensation for material losses and “pain and suffering” and sent two lawyer’s letters to OAHS, but she could not afford to pursue a lawsuit in small claims court.

One of the letters, dated February 2021 and obtained by CBC News, accused the organization of inaction over the three years since Wagemese last requested compensation and said she had incurred more than $50,000 in damages.

“Your house caused me to lose everything I owned. Help me, help me get back on my feet,” said Wagamese.

“Living here is not a home, it’s just a house that I come to because I can’t afford anything else … If I could, I’d be gone.”

Ishkode-O’de Wagamese and her family moved into a house owned by Ontario Aboriginal Housing Services in 2014. Within months, she says mold had destroyed many of their belongings. In a statement, OAHS says it is “extremely confident” in the work done “to ensure the health and safety of all our tenants.” 2:05

The Ontario Ministry of Municipal Affairs and Housing provided OAHS with $33 million from 2014 to 2020, with roughly $20 million of that directed into the organization’s long-term rental program, according to a breakdown of the distribution of housing program funds.

In its corporate profile, the organization says it strives to help tenants “meet their needs of personal and financial security, health and spiritual well-being.”

“If this is the company that they say they are … they’ve failed to provide that to us,” said Wagamese.

She has had four more leaks in her basement since the spring, resulting in further damage to her belongings and says recurring issues have harmed her physical, financial and mental health.

The foundation of her home had to be excavated again, and her beloved garden was ruined in the process.

Moved out and much happier

Sarah Valley, who lived in two units run by OAHS between 2013 and 2018, says cutting ties with the organization changed her life for the better.

Her first house in North Cobalt, which sits along the northwestern shore of Lake Timiskaming, had black splotches in the basement, cracks in the walls, and on several occasions, the house got so cold that the door froze shut — she had to use a blow dryer to defrost it so she could get to work, she said. Her children kept getting sick, she added.

“The black mould, they just didn’t believe me,” said Valley of OAHS’s response to her complaints.

The alleged mould problem “never got fixed,” she said, so she moved to another OAHS unit in the nearby town of Englehart. That home had chronic leaks in the basement, as well as water seeping from her kitchen light fixture and her ventilation system.

“It was a waterfall,” she said. “That place was just horrible.”

WATCH | Valley gives a tour of her leaky basement in 2017:

Sarah Valley says she routinely found water in the basement of her home, which was owned by Ontario Aboriginal Housing Services. Emails show her asking the organization to fix the leaks five times between March 2017 and January 2018. In a statement, OAHS defended its work, calling some of the allegations “entirely false.” 1:33

Valley said contractors fixed her roof, but the basement leaks continued. Eventually, she moved out before the issue was fixed.

She now lives in a house run by another non-profit housing corporation in Kirkland Lake, Ont., and calls it a “blessing” compared to her previous two living quarters.

George Joseph Stephen, who lives in Hanmer north of Sudbury, says he’s been living with a poorly finished ventilation system since moving into a newly built apartment about a decade ago.

“Every time I mopped the floor, there would be like white foamy stuff on it. I found it was from the drywall that was in there that was flowing from my air vent. That’s what it was — drywall cuttings,” said Stephen.

“My allergies are always bad in here. I have to take allergy pills every day now for the past several years.”

When he opened the vent to investigate, he found sheet metal missing from the air duct. He says he’s been living with the kitchen vent covered in foil and tape since then.

Stephen questions whether the non-profit had the house properly inspected before allowing him to move in. The issue is still not fixed since he first flagged it soon after he moved in.

He said he also lived for eight months with a leaking hot water tank.

“I kept telling them but they wouldn’t do anything. … It finally broke, so I didn’t have a shower for a good six months maybe.”

Stephen then called the bylaw department from the City of Sudbury, which served an order to OAHS to fix his tank and shower.

Affected tenants say they want an investigation into how OAHS handles clients and homes, but the organization defends its work.

OAHS said it spent $5.1 million on fixing and maintaining its units this past year, and $5.9 million the year prior.

After declining an interview on multiple occasions, the non-profit issued a more strongly worded statement.

“Some of the allegations raised are entirely false. We would caution against publishing allegations that are not fully corroborated.”

CBC asked the Ontario Ministry of Municipal Affairs and Housing whether they would be looking into any of the tenants’ allegations, but they declined an interview.