Most styrofoam isn’t recycled. Here’s how 3 startups aim to fix that 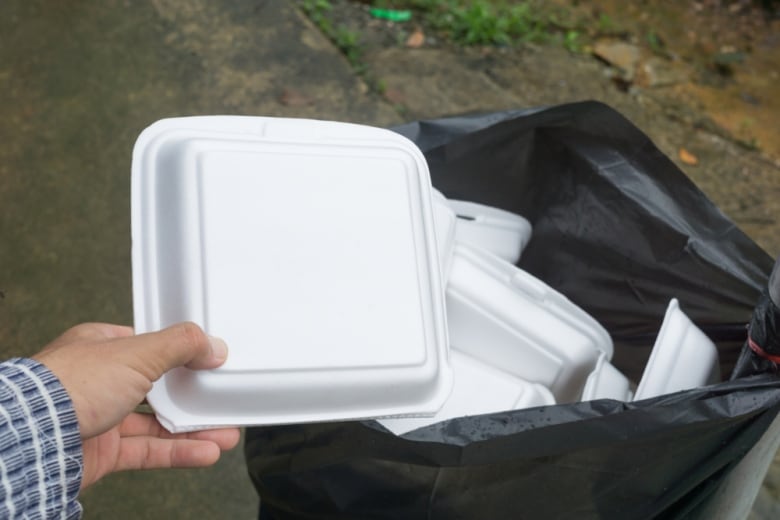 Reduce, Reuse and Rethink is a CBC News series about recycling. We’re exploring why our communities are at a turning point and exploring ways to recycle better. You can be part of the conversation by joining our Facebook group.

Virginie Bussières jokingly refers to styrofoam as “public enemy No. 6.” That’s because the polystyrene takeout containers, electronics packaging, coolers and other products we discard each year are more likely to pollute waterways or get buried in landfills than they are to be recycled. (The No. 6 is a reference to the plastic’s identification number or resin code). And once in the environment, they can take decades or even centuries to break down.

But Bussières and her colleagues at Montreal-based Pyrowave are hoping to reform styrofoam — literally — into a resource that everyone wants to recycle.

And they’re not the only ones. Montreal-based Polystyvert and Brantford, Ont., based GreenMantra have a similar vision, but different technological solutions.

A recent report from the Canadian Chamber of Commerce found that, in 2012, 80 per cent of styrofoam waste in Canada, more than 6,500 tonnes, ended up in landfills or waterways.

That’s because most communities don’t recycle it — just 35 per cent accept polystyrene in their recycling programs, according to the Canadian Plastics Industry Association. 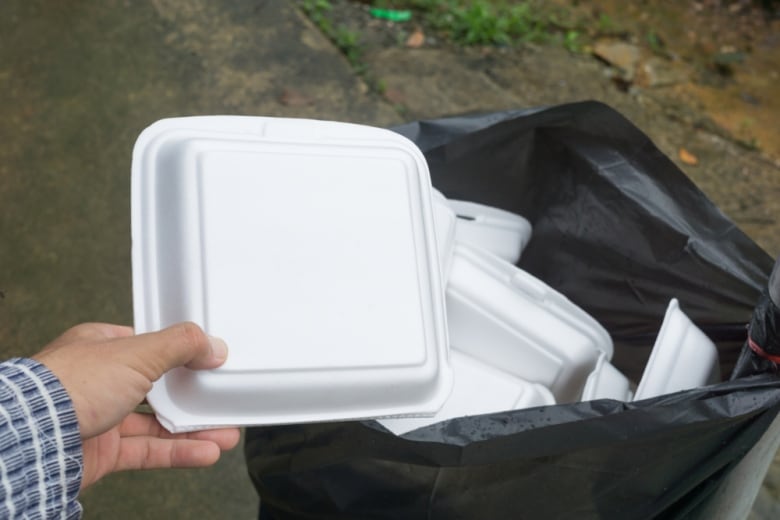 Only 35 per cent of Canadian communities accept styrofoam in their recycling programs, according to the Canadian Plastics Industry Association. (kittiwat chaitoep/Shutterstock)

It’s even worse in the U.S., which recycled less than four per cent of its polystyrene containers and packaging in 2012, the Environmental Protection Agency reports.

The main problem is it’s not cost-effective to collect a material that’s so bulky and light, and breaks apart so easily, contaminating other recyclables. And there aren’t a lot of buyers once it’s collected. Many jurisdictions, including the City of Toronto, have to effectively pay companies to take it.

But the cost isn’t the only issue with traditional, “mechanical” recycling.

Bussières, vice-president of communications, marketing and government affairs for Pyrowave, says it also has trouble coping with contamination from things like food residues that are often found on food containers.

And as with most plastics, traditional styrofoam recycling is not actually a cycle.

After processing, it’s no longer expandable or foam-like. Instead, it gets turned into hard plastic for things like crown moldings, picture frames and park benches. That is, it can only be “recycled” once. 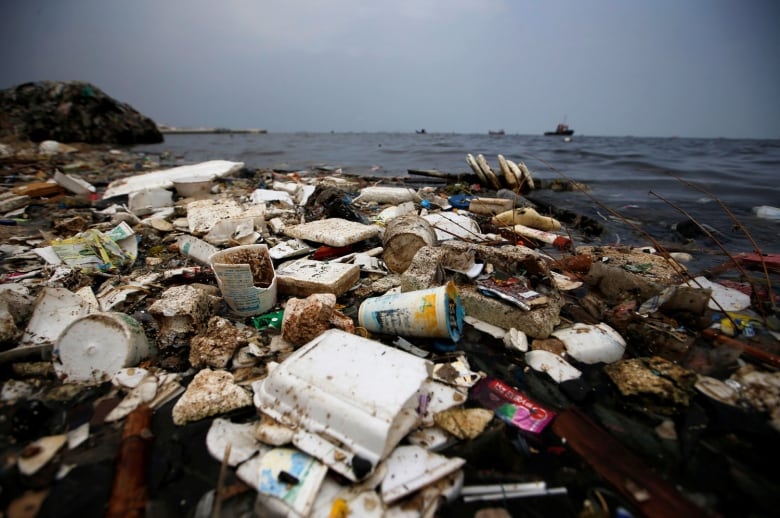 That’s the difference with Pyrowave’s technology — it uses a “chemical recycling” process to take waste polystyrene and generate brand-new styrofoam.

Microwaves heat up and break down polystyrene molecules, which are long chains, into their individual links — called styrene. That in turn can be chemically processed back into polystyrene.

“All the contamination is taken away in the process,” Bussières added.

That means the process can start with dirtier styrofoam than traditional recycling can handle, and generate new styrofoam with 100 per cent recycled content that’s identical to styrofoam made directly from petroleum.

“We can reduce our dependency on oil,” Bussières said. “That’s the vision behind the technology.”

She added that it’s also the key to a so-called circular economy — based on resources being endlessly reused and recycled instead of extracted new and then landfilled at their end of life as they mostly are now.

Pyrowave estimates its recycling process can produce polystyrene with a tenth of the energy and half the greenhouse gas emissions of polystyrene made directly from oil, and says it can sell its styrene at a price that’s competitive with “virgin” styrene produced from crude oil. 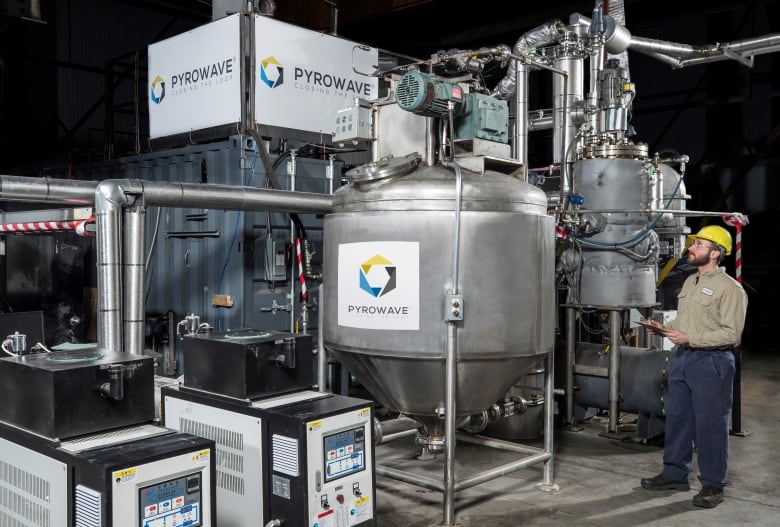 At Pyrowave’s plant, microwaves are used to break down polystyrene molecules back down into styrene. (Pyrowave)

The product can also be recycled over and over again, although currently about 10 per cent is lost each time.

Bussières says polystyrene is ideal for chemical recycling because every chain link is the same (in many polymers, there are different kinds of chain links): “Technology can bring something that was public enemy No. 6 to one of the easiest to recycle.”

The company launched a pilot test of its technology in November 2018 in Salaberry-de-Valleyfield, Que., near Montreal. Its plant can handle about 100 or 200 kilograms an hour. The resulting styrene oil is sold to Sarnia, Ont.-based chemical supplier INEOS Styrolution Canada.

Bussières said the company is also in discussions with Health Canada to get food grade approval for polystyrene made through its process.

Not far from Pyrowave, another Montreal company says it can also make polystyrene from 100 per cent recycled materials.

The difference is that instead of breaking the polystyrene down, Polystyvert simply dissolves it, in the essential oil cymene.

“It’s a change of state,” said Solenne Brouard Gaillot, the company’s founder and CEO, who likened it to the transition between snow and water.

The company supplies solvent-containing concentrators to companies that can be placed on-site. By dissolving styrofoam before transportation, it says it can put 10 times more styrofoam in the same truck. 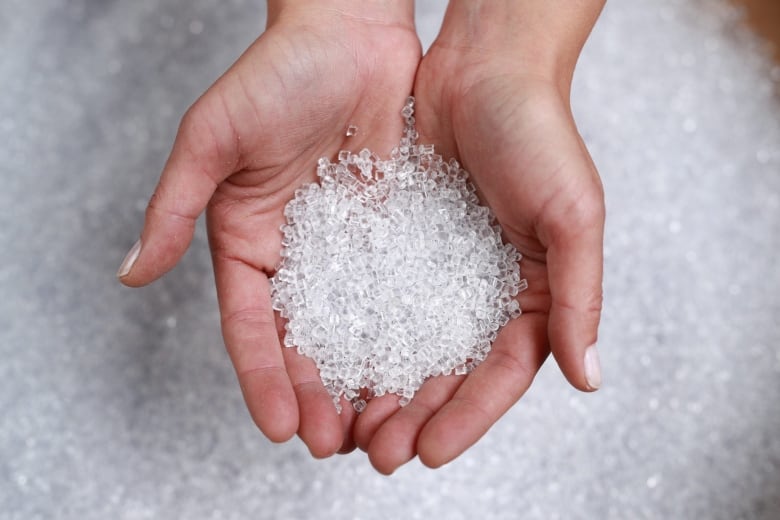 The styrene oil generated from Pyrowave’s process can be used to regenerate new polystyrene resin identical to that produced directly from crude oil. (Pyrowave)

Once dissolved, it can be resolidified with another solvent, and washed and filtered multiple times to remove contaminants before being reformed into polystyrene pellets. Those can be turned back into styrofoam.

The solvents can be recycled and reused repeatedly, and so can the styrofoam itself.

“Without any end. That’s the point,” Brouard Gaillot said.

Because it doesn’t need to be chemically broken down into styrene and then reprocessed into polystyrene, Brouard Gaillot says Polystyvert’s process is cheaper and lower energy than Pyrowave’s.

She added that the polystyrene pellets it produces are cheaper than “virgin” polystyrene made from oil, and that’s important because manufacturers aren’t willing to pay a premium for a “greener” product.

Polystyvert opened a Montreal demonstration plant in June 2018 that can process 125 kilograms of polystyrene per hour or 800 tonnes a year. It gets its polystyrene from both municipalities and companies such as fridge distributors.

The polystyrene it produces is currently being sold to a company that makes insulation.

But it, too, is trying to get food grade approval from Health Canada and USDA so it can make food containers.

And now for something completely different

She thinks in order to boost plastic recycling rates around the world, recycling needs to be more worth the effort, and for that to happen, waste plastic needs to be worth more. 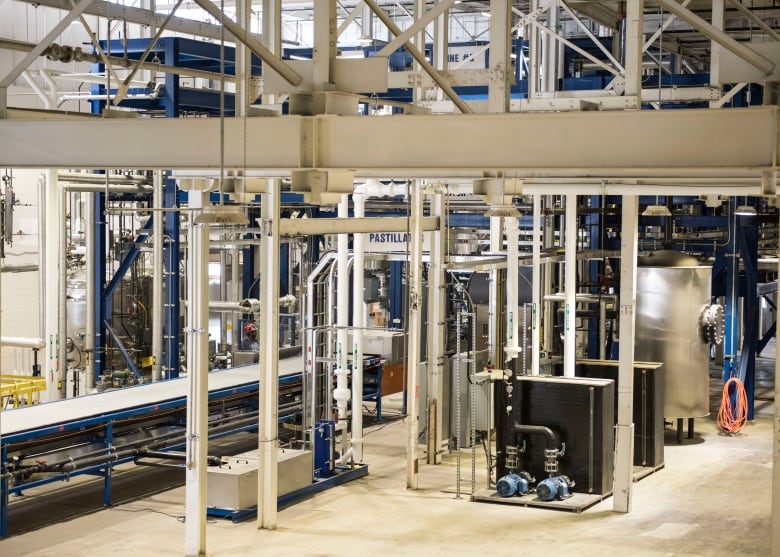 GreenMantra has built a demonstration plant in Brantford, Ont., that is expected to process several thousand tonnes of polystyrene a year. (GreenMantra)

It’s a form of chemical recycling, like Polystyvert’s technology. But instead of breaking the styrofoam chains into their individual links, it only cuts them into smaller pieces.

That generates a material completely different from styrofoam.

“Through using this molecule, we can create products that can have much more value than the original plastic,” Morgan said.

Those include additives for inks and coatings for the printing industry that make them glossier, easier to print out and more durable. They replace similar additives made directly from fossil fuels, says Domenic di Mondo, GreenMantra’s vice-president of technology.

The fact that styrofoam is often contaminated with food makes it more difficult to recycle. (Emily Chung/CBC)

Another of the company’s goals is to make it easier for styrofoam to be reused. Right now, that’s tricky because so many different kinds of styrofoam are collected for recycling together, and they’re hard to mix into a single product.

GreenMantra’s additive could help them mix evenly so they can be turned into more products like insulation boards. Morgan likened it to the emulsifier in bottled salad dressing that keeps the oil and water from separating.

Di Mondo says the additive can also lower the density of the foam, boosting its performance as an insulator.

The company has just built a Brantford, Ont., demonstration plant that it expects will open in a month or two and will be able to process thousands of tonnes of polystyrene a year.

And unlike Pyrowave and Polystyvert, which are getting their raw materials for free, GreenMantra says it is choosing to actually pay money for some of the waste polystyrene it will be getting from companies and municipalities.

“In part, why we’re doing that is to drive more collection,” Di Mondo explained.

That’s welcome news for cities struggling to find a home for their waste styrofoam.

At the moment, Pyrowave, Polystyvert and GreenMantra are operating on a relatively small scale as they take measurements and tweak their technology. Polystyvert, for one, says it’s getting more offers of free styrofoam waste than it can handle. 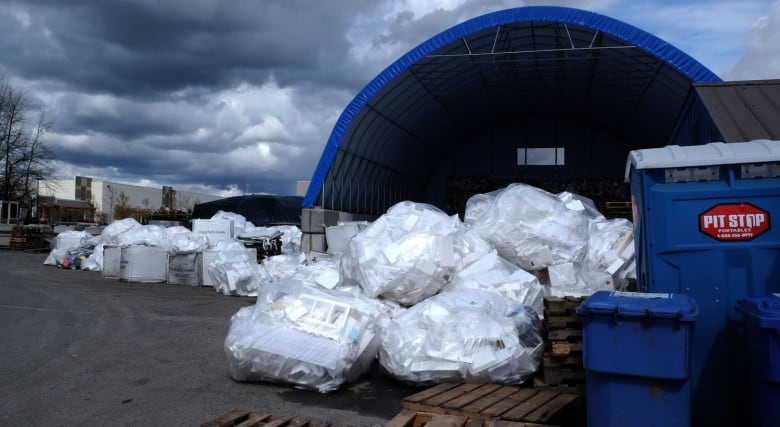 Because styrofoam can break up and contaminate other recyclables, some communities require residents to take it to depots, like this one in New Westminster, B.C. (Emily Chung/CBC)

Kerr said the City of Toronto has done trials with all three companies to test the new technology.

“So there is some hope for this material,” she said.

Andrea Hicks, an assistant professor of civil and environmental engineering at the University of Wisconsin, Madison published a recent study that looked at the environmental impact of polystyrene through its life cycle.

It found extracting the raw materials for polystyrene is “environmentally taxing” because they need to be distilled from crude oil.

But she noted that the styrofoam needs to be re-expanded and shaped, and shaping and moulding alone consumes 30 per cent of the energy in the life cycle of styrofoam.

She added that it’s not a given that any given new recycling technology is better for the environment.

That depends on the amount and type of energy used to power the process, as well as the other materials, such as solvents, used in the process. “And the environmental impact of that.”

“There’s that whole reduce, reuse, recycle,” she said. “And I think what people really miss is it’s actually a hierarchy. We’re supposed to reduce what we’re using, then reuse, and the last case is recycling.”