More than half of recent applications to join the military came from permanent residents: DND 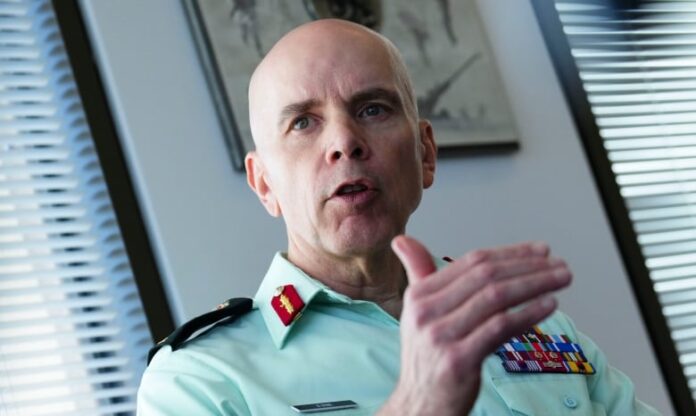 More than half of the applications received this past week from people looking to join the Canadian military — nearly 700 — came from permanent residents, the Department of National Defence says.

Since the beginning of November, 2,670 newly arrived immigrants have volunteered to serve in the Canadian Armed Forces. It may be a sign that a long-term trend of newcomers shying away from the military is finally coming to an end.

On Dec. 5, the federal government lifted the ban on permanent residents joining the military, following the example set by allies who have long held the door open for immigrants.

In the weeks leading up to the change, inquiries from permanent residents about military service made up slightly less than a third of the total. Since the announcement on Monday, that share has increased to 50 per cent — or 680 applications between December 5 and 8.

The figures, although preliminary, likely come as a bit of a relief to Eyre, who has warned for several months that the military is facing a critical shortfall in personnel.

The military had a plan to boost recruitment of soldiers, sailors and aircrew before COVID-19 hit, but attrition, the fallout from the sexual misconduct scandal and the pandemic lockdowns drove that plan off the rails.

The Armed Forces has received more than 8,200 applications since early November. Until the individuals are enrolled, however, they’re not considered recruited — and that has Eyre concerned.

In 2016, the auditor general criticized the defence department’s enrolment process, saying it was so slow and tied so tightly to the military’s timelines that many applicants simply dropped out. That complaint has been repeated over the intervening years and was heard most recently by the House of Commons defence committee.

“The challenge we have — and I’ve challenged the team on this — saying, ‘Okay, we’ve got all of these applicants, now rapidly process [and] rapidly get them through the system so that we can get to the enrolment phase,” said Eyre, adding a recruitment modernization team is working on the problem.

The acting commander of the Military Personnel Command, Maj.-Gen. Lise Bourgon, underscored the challenge in an interview Friday on CBC’s Power & Politics. She said that 2,800 new recruits have been enrolled so far this year — less than half of the 5,900 people the military meant to get through the door.

The defence department’s Director General Defence Security (DGDS) has indicated that permanent residents will face a more intensive security screening process, including a pre-assessment to determine their eligibility.

The screening will determine whether an applicant has spent more than 180 days outside of Canada in the last 10 years and whether they have visited specific countries that might present a security risk.

All that, says the department, will take time.

New Canadians’ views on military service could be changing

For more than a decade, the department’s annual public opinion surveys and focus groups examining the public’s perception of the Armed Forces have shown that recent immigrants generally have been more reluctant than Canadian-born citizens to consider a career in the military.

Much of that hesitancy is linked to the fact that many newcomers come from countries where the military is regarded with suspicion.

While Eyre acknowledged that fact, he said recruiters are now hearing something different from new Canadians more often than not — a desire to serve their new country in uniform.