More than 200,000 without power as high winds blow through southern Ontario 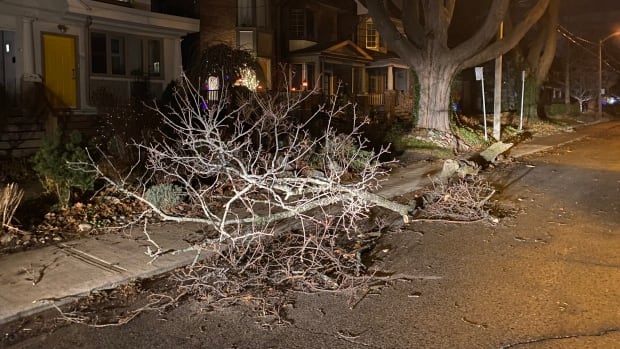 More than 200,000 Ontarians are without power on Saturday as high winds brought down trees and power lines across the southern part of the province.

Utility Hydro One says outages were affecting more than 200,000 customers as of Saturday at 10 p.m., and those in hardest-hit areas were expected to remain in the dark overnight.

“We expect customers in the hardest hit areas of south, central & eastern Ontario to be without power overnight,” Hydro One said in a tweet. “As soon as it’s safe, more crews will be on their way to help.”

Environment Canada issued wind warnings for essentially all of the province’s southern region, with gusts between 90 and 120 kilometres per hour expected through the afternoon and evening.

The warnings had lifted for much of southwestern Ontario and the Greater Toronto Area by Saturday night, but remained in place for eastern parts of the province.

UPDATE: Over 200,000 customers are without power as the <a href=”https://twitter.com/hashtag/ONstorm?src=hash&amp;ref_src=twsrc%5Etfw”>#ONstorm</a> continues. We expect customers in the hardest hit areas of south, central &amp; eastern ON to be without power overnight. As soon as it’s safe, more crews will be on their way to help. We appreciate everyone’s patience. <a href=”https://t.co/iZjbN7yKip”>pic.twitter.com/iZjbN7yKip</a>

Earlier, Toronto police issued a tweet saying it was responding to “many reports” of wires and trees down across the city due to the wind shortly after 3 p.m.

The force is asking people not to call 911 unless reporting injuries.

Tweets from the police force reported hazards from fallen trees, traffic lights and scaffolding from a construction site on Saturday afternoon.

Crews are responding to scattered outages, but restoration efforts may be affected by the high winds as they cause unsafe working conditions. The high winds make it unsafe for crews to safely assess the damage and repair overhead equipment from the buckets of their trucks.

Matthew Pegg, the city’s fire chief and head of emergency management, also shared a “heads up” for residents and safety tips on his Twitter account on Saturday.

“Please remain alert for flying debris while moving around the [City of Toronto],” he wrote. “If you encounter downed lines, stay at least the length of a school bus away.”

In a tweet, the police force asked people to drive or walk with caution.

In addition to the southern Ontario wind warnings, Environment Canada also issued snowfall and winter storm warnings for the northeastern part of the province. Up to 20 centimetres of snow is expected in areas such as Timmins, Ont., and Sault Ste. Marie, Ont.

It says a mix of precipitation from freezing rain and ice pellets or snow was expected as a low pressure system moved northeast across the Great Lakes.